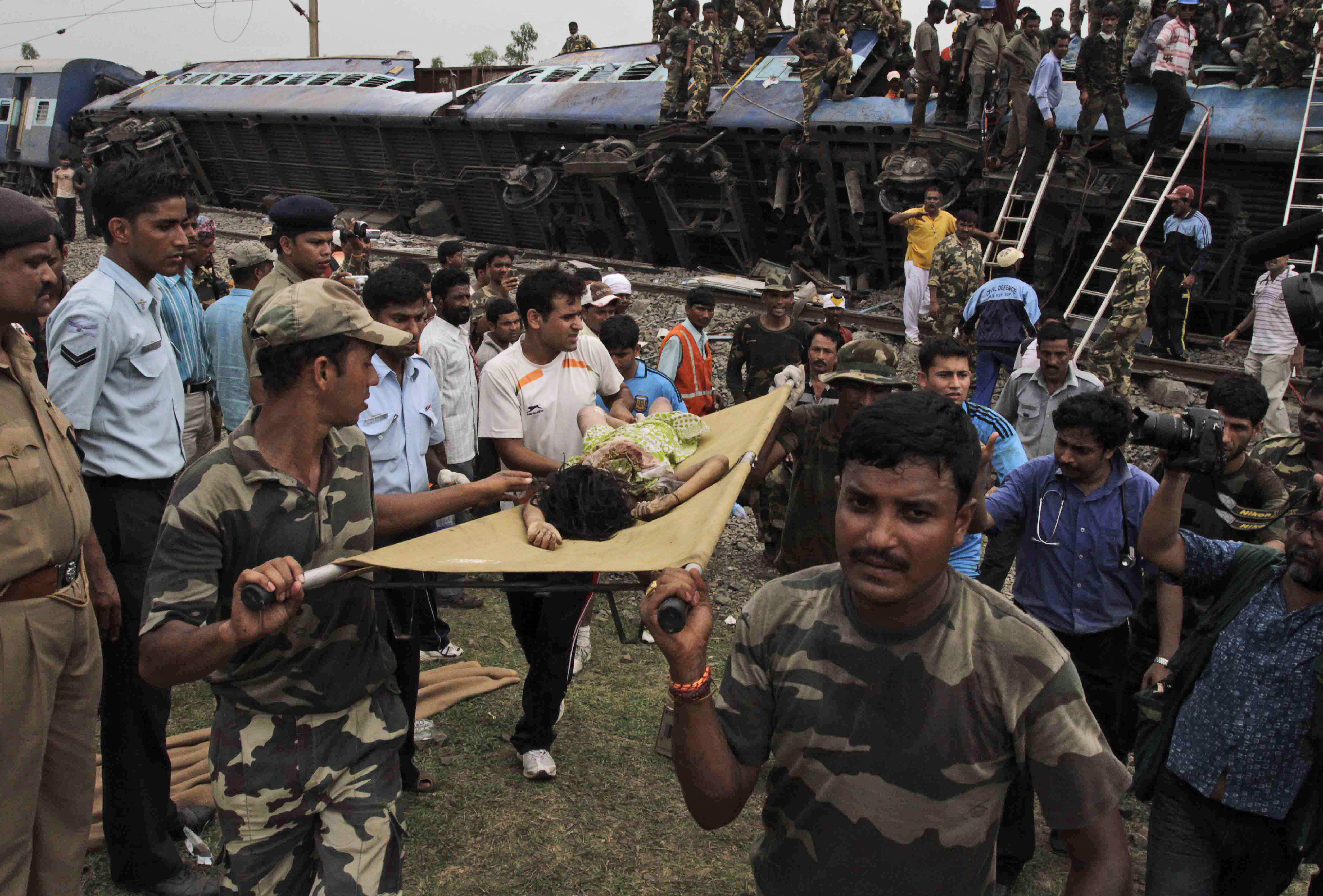 Suspected Maoist rebels derailed an overnight passenger train yesterday in eastern India, triggering a crash with an oncoming cargo train that killed at least 65 people and injured 200 more, officials said.
Survivors described a night of screaming and chaos after the derailment and said it took rescuers more than three hours to reach the scene. The blue passenger train and the red cargo train were knotted together in mangled metal along a rural stretch of track near the small town of Sardiha, about 90 miles (150km) west of Calcutta in West Bengal state.
Officials disagreed on the cause of the derailment, with some saying it was caused by an explosion but others blaming sabotaged rail lines. Home Minister Palaniappan Chidambaram said in a statement that a section of the railway tracks had been cut, but "whether explosives were used is not yet clear."
Bhupinder Singh, the top police official in West Bengal, said posters from the People's Committee Against Police Atrocities, a group local officials believe is closely tied to the Maoists, had been found at the scene taking responsibility for the attack.
However, a spokesman for the group, Asit Mahato, denied any role, the Press Trust of India news agency reported.
"We were in no way involved. This is not our act," PTI quoted him as saying by phone.
"What can we do if somebody claims responsibility on our behalf?" he told PTI when asked about the posters found near the scene.
The area is an isolated, rural stronghold of India's Maoist rebels, known as Naxalites, who have stepped up attacks in recent months and had called for a four-day general strike starting Friday. Earlier this month, the rebels ambushed a bus in central India, killing 31 police officers and civilians.
Nearly 10 hours after the blast, railway police and paramilitary soldiers were using blowtorches and cables to try to reach at least a dozen passengers still trapped in the wreckage, said A.P. Mishra, general manager of the railway system in that area.
Sher Ali, a 25-year-old Mumbai factory worker, was traveling with his wife, two children and his brother's family when they were jerked awake by a loud thud. A moment later, their car was tossed from the track, he said.
"My sister-in-law was crushed when the coach overturned. We saw her dying, but we couldn't do anything to help her," said Ali, who had cuts on his head and arms. The rest of the family survived, though a 10-year-old nephew was badly injured and hospitalized.
Ali was unable to go to the hospital, though, because all his money was in his luggage inside the wreckage and he was afraid it would be stolen unless he kept watch.
The passenger train was traveling from Calcutta to the Mumbai suburb of Kurla when 13 cars derailed. A cargo train then slammed into three of the cars from the other direction, Railway Minister Mamata Banerjee said.
Mishra said the train had been derailed by a bomb and that the tracks had also been sabotaged. Banerjee said authorities suspected the bomb was planted by Maoist rebels.