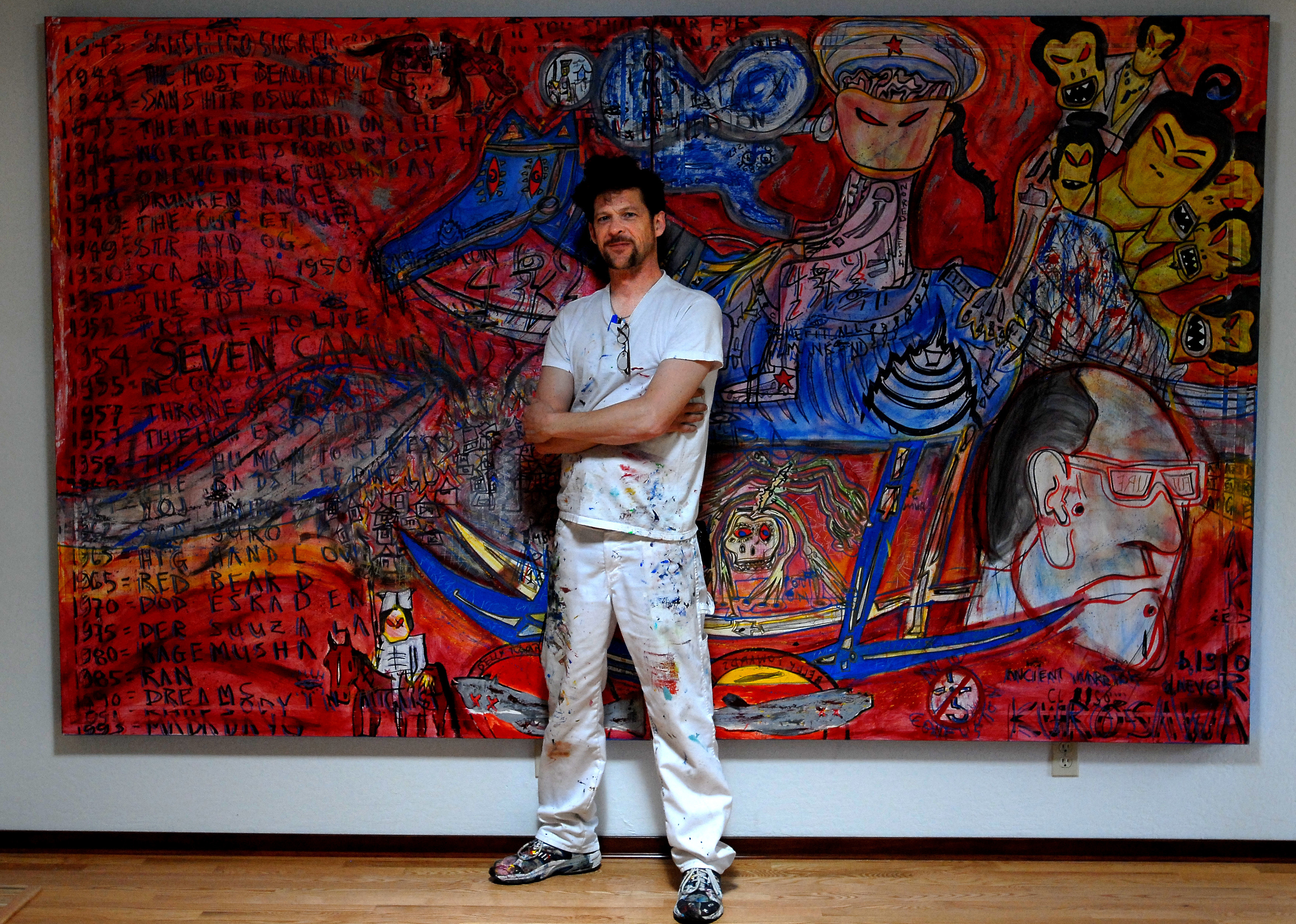 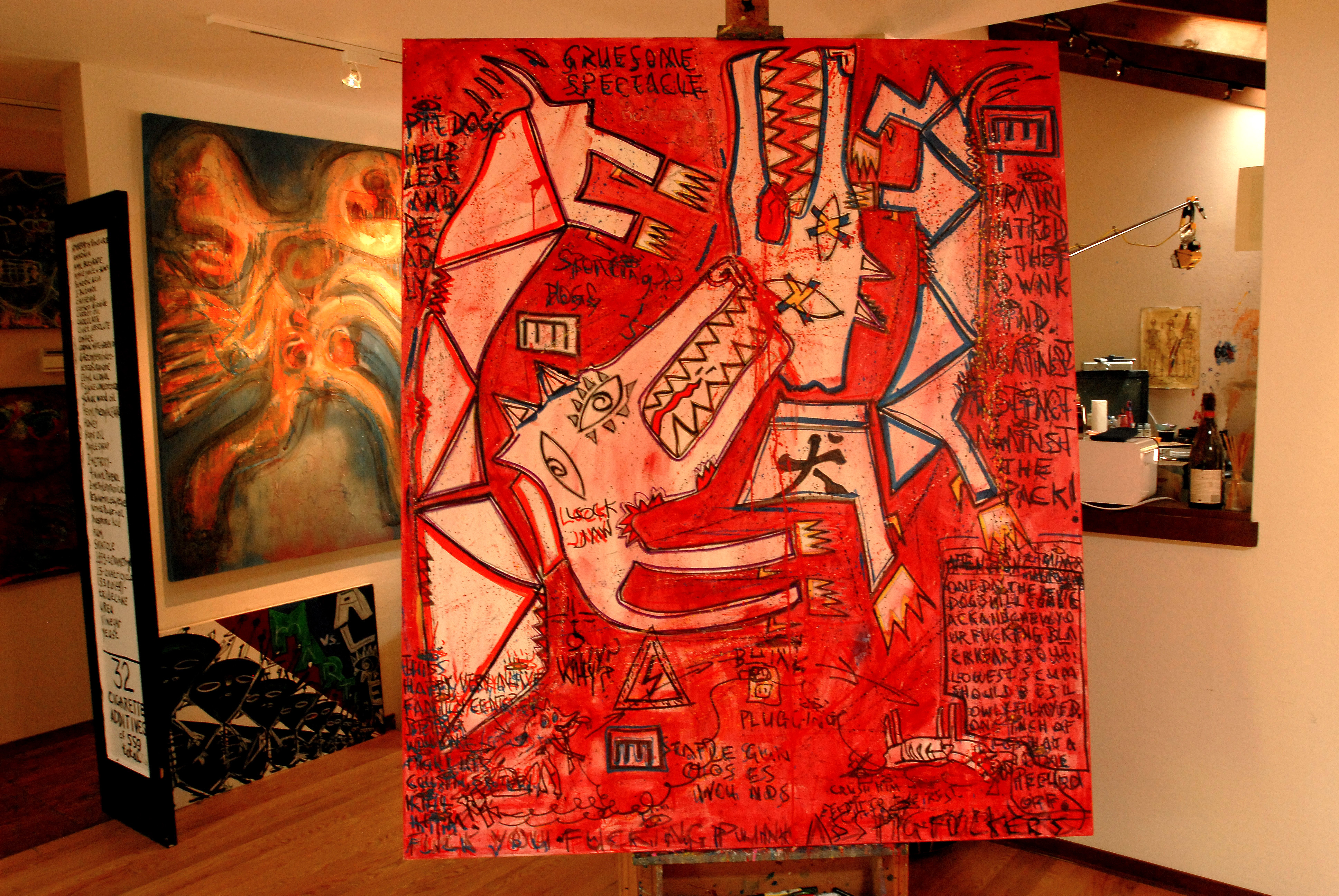 Nicole Leigh Smith and her man were at their Montana ranch, where he was moping with his right arm in a sling, thanks to recent surgery.
Before making the long trip to the nearest grocery store, she encouraged him to find something to do - a rare request of a guy with Jason Newsted's frenetic energy.
"I sensed he was a little down," Smith says of that 2005 day that changed Newsted's life. The former bassist for Metallica, Voivod and Ozzy Osbourne finally had his right shoulder fixed after decades of wear-and-tear on stage, and he wasn't used to resting.
"I said, 'Why don't you paint today?'" Smith recalled. "And he said, 'Paint what?' So I set him up and said, 'I'm going to be gone all day - go crazy.'"
Smith, an accomplished artist herself, came home eight hours later to find her boyfriend - and much of the room - covered in paint.
"We still haven't got all the paint off the carpet," she says." He was like. 'Thanks, Nic, that was awesome.' I was like, 'Oh God, what have I done?'"
What she did was launch a new chapter in the artistic career of Newsted, now 47, who's come a long way since Montana. His work, which he describes as self-taught contemporary American art influenced by Pablo Picasso, Jean Dubuffet and Jean-Michel Basquiat, hangs at the Micaela Gallery in San Francisco until June 27.
"I dove in right away," Newsted says in his Walnut Creek studio, the former home of his next-door neighbor now bulging with giant stacks of paintings - about 600 in all. "It's lemons to lemonade, man. I couldn't do what I was meant to do (play music). It was emotionally devastating - having to sit in the same spot for two hours."
After that first messy day, the burgeoning painter was banished to the barn where, naturally, he painted the tractor.
By his own admission, Newsted was "whacked out on painkillers" and his initial method wasn't much different from his style of bass-playing: seriously aggressive. It encompassed a lot of slinging paint onto a target, which he says was necessitated by his bum arm.
Being right-handed but having to paint left-handed made painting not only therapeutic, it altered his body routine and, perhaps, stimulated his brain in new ways, if studies are to be believed. Either way, Newsted found a new creative purpose.
"It became dogma - a painting style out of necessity," he says. "The most powerful reason I do it is that I step back from the canvas and say, 'I had no idea that was in me.' Some of the first ones were the best. It was just childlike wonder."
Although he can now discuss art with serious collectors, like former Metallica bandmate Lars Ulrich (who brought his kids to Newsted's opening), for two years Newsted avoided things that might influence his painting, which quickly grew to near-obsession. "We don't schedule meals," Smith says. "I put meals in the fridge and he gets them whenever."
"A white canvas is silence," Newsted says. "I always played loud - (my) art is loud. It's a direct transfer."
Micaela Gallery owner Micaela Van Zwoll heard about Newsted's painting through a mutual friend, who arranged a meeting between the two.
"I was amazed at how prolific he is," she says. "A lot of energy went into his work. And I could see an evolution in his technique. He has a lot to be proud of. He's very, very talented."
Painting wasn't entirely foreign to Newsted, who grew up on a Michigan farm working with animals, painting and learning public speaking (for which he won a state competition at age 12). But the other hobbies melted away once he discovered rock music. "I was very attracted to what the loud music could do to people. I went to my first Ted Nugent concert still wearing my boots with animal (manure) on them."