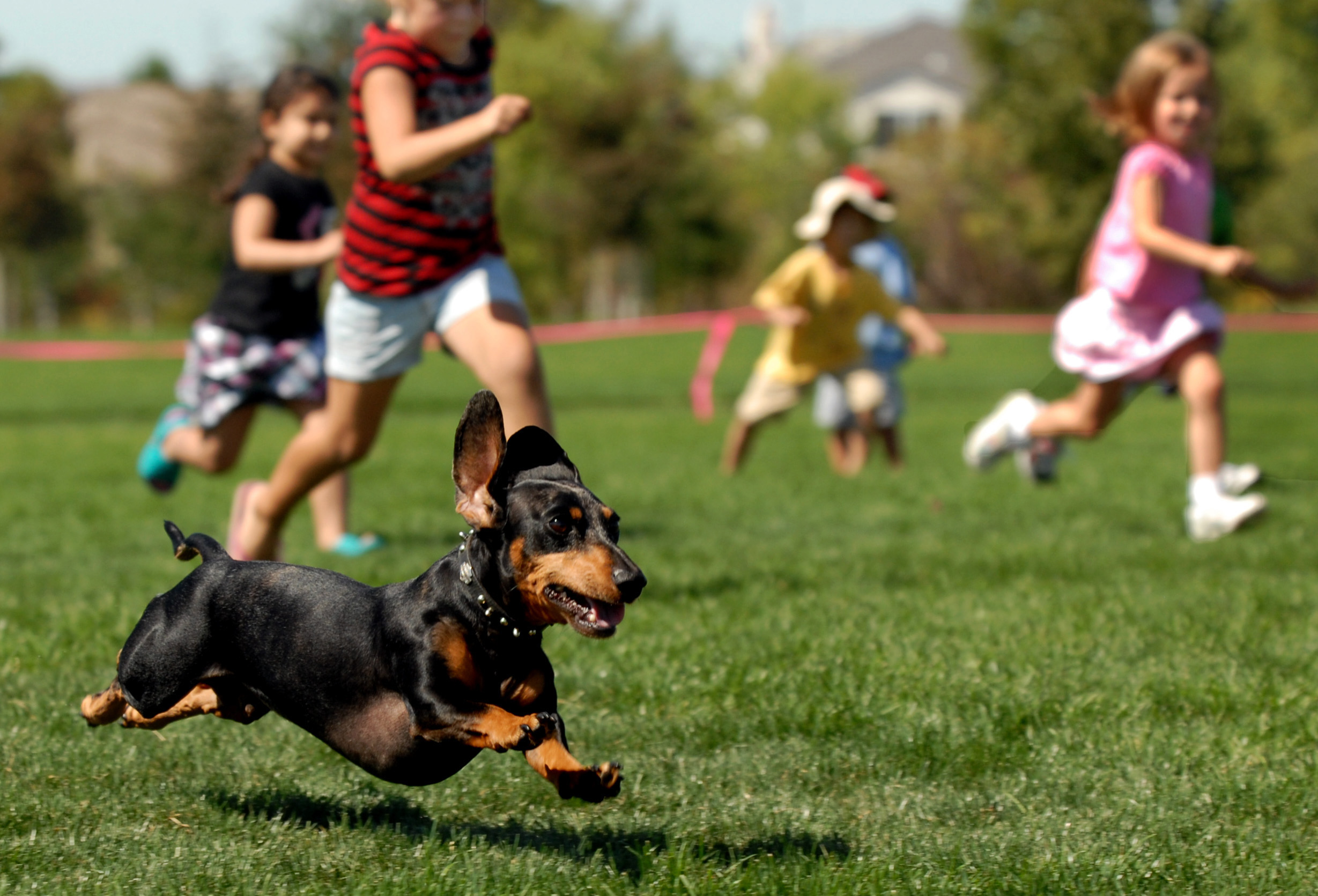 Sammy Davis loves to fetch.
His ears perk up. His little dachshund tail switches back and forth. They say he'll chase anything.
"No dog runs like him," said Patrick Major, his owner. "He's special."
Major should know.
In the seven years they have been together, Major has seen Sammy Davis transform from a playful pet to one of the fastest dachshund racers in the state. And, even though he stands only about 6 inches high, Sammy can pump his stubby little legs and leap through the air to catch Frisbees nearly as big as he is - he was a doggie pinup in the International Disc Dog calendar three years running.
But the biggest transformation has been in Major himself. He calls Sammy his "miracle dog," the pup that saved his life.
In 2003, when Sammy came into his home, Major, now 45, was at the end of his rope. Five years of failing kidneys, because of hypertension, had chipped away at his will. Major grew tired of being left exhausted and depleted by a dialysis machine, only to have to repeat the process 48 hours later.
He was ready to quit the treatments until Sammy entered the picture, arriving just in time.
On advice from his girlfriend, Sabrina Seiden, Major had decided to get a dog to keep him company and raise his spirits after those long dialysis sessions. It was an odd decision for the Pleasanton couple: Neither had ever owned a dog.
Major checked the newspaper ads that day and called a breeder in Madera. He and Seiden then drove more than two hours to meet the breeder's four dachshund pups, but both instantly picked Sammy.
Seiden was smitten with the puppy's symmetrical brown markings over his eyes. Major was drawn to the dog's nonstop activity.
They picked the name Sammy Davis one night after seeing the late entertainer Sammy Davis Jr. on TV - and realizing their pup had the makings of a star.
"He has some special quality that is hard to describe in words," Seiden, 33, said. "For such a little guy, he has such a huge presence."
Still, their joy turned to worry days later when the four-pound pup contracted canine parvovirus type 2, usually just called parvo, which shuts down a dog's ability to absorb nutrients or fluids.
The news hit Major hard.
"Like I hadn't been through enough," he said.
The veterinarian gave Sammy a 50-50 chance of survival. For a week, Major and Seiden sweated it out, jubilant when they got word Sammy would be OK.
"Things happen for a reason," Major said. "Sammy was so sick (but) I made the decision to save him, and he then saved me."
The dialysis continued. Three days a week, Major trekked to Union City, Calif., for treatment, only to return home and sleep. He didn't have the strength to do anything else.
Sammy changed that.
The rambunctious pup constantly perched himself right behind the front door of their then-Hayward, Calif., home, waiting for Major's return. Once he was home, Sammy wouldn't let Major rest, constantly plopping things at his feet.
It started with a small piece of rope tied at both ends that Sammy would catch in midair. It progressed to balls and eventually Frisbees. And when Major grew tired of fetch, Sammy found pine cones and even paper airplanes to coax Major to keep playing.
"I was able to forget about how depressed I was," Major said. "It took my mind away from dialysis."
Instead, Major began to occupy his time playing with Sammy and scouring the Internet for dog training tips. The more Major worked with Sammy, the better he got at picking up commands.
"I would talk to him like he's human," Major said.
Sammy went from tracking down Frisbees to vaulting off Major's back and catching the discs. As Sammy improved, so did Major's health.
A year after Major and Seiden found Sammy, Major received the call he had waited on for six years. Doctors at the University of California San Francisco had found a kidney donor.
Major and Seiden rushed to San Francisco, where doctors told Major that a man the same height and weight as him had died and his kidney was available. Hours later, Major was out of surgery.
"He had waited so long," Seiden said. "When it finally happened, it felt surreal."
The blessings kept coming. Five months after Major received the kidney, Seiden gave birth to the couple's son, Joshua, now 5.
Sammy's life also began to change.
Major took him to a disc dog competition in Fremont, Calif., where he caught the eye of Steve Teer, co-founder of Disc Dogs of Golden Gate. Teer was well known in the disc dog community, but he'd never seen a dachshund do the things Sammy Davis could do.
Sammy began competing in disc dog events around the state and his skill and uniqueness earned him praise up and down the state.
But, as good as he is at catching plastic circles, Sammy is even more well known on the racetrack.
In 2007, Sammy was the top dachshund in his class, winning the 2007 Wienerschnitzel Wiener Nationals Championship.
But things didn't start out so promising.
A visit to a local Wienerschnitzel turned Major on to wiener dog races and a chance for Sammy to show off his skills. Sammy made his debut in 2006 at the Alameda County Fair. It was a memorable race, but not one that he won.
On that hot July day, Sammy darted out the starting gate and headed straight for the shade. He finished last.
Sammy finally got it right in 2007, winning his first race.
He hasn't lost since, including back-to-back Dachshund Derby victories at the state fair.