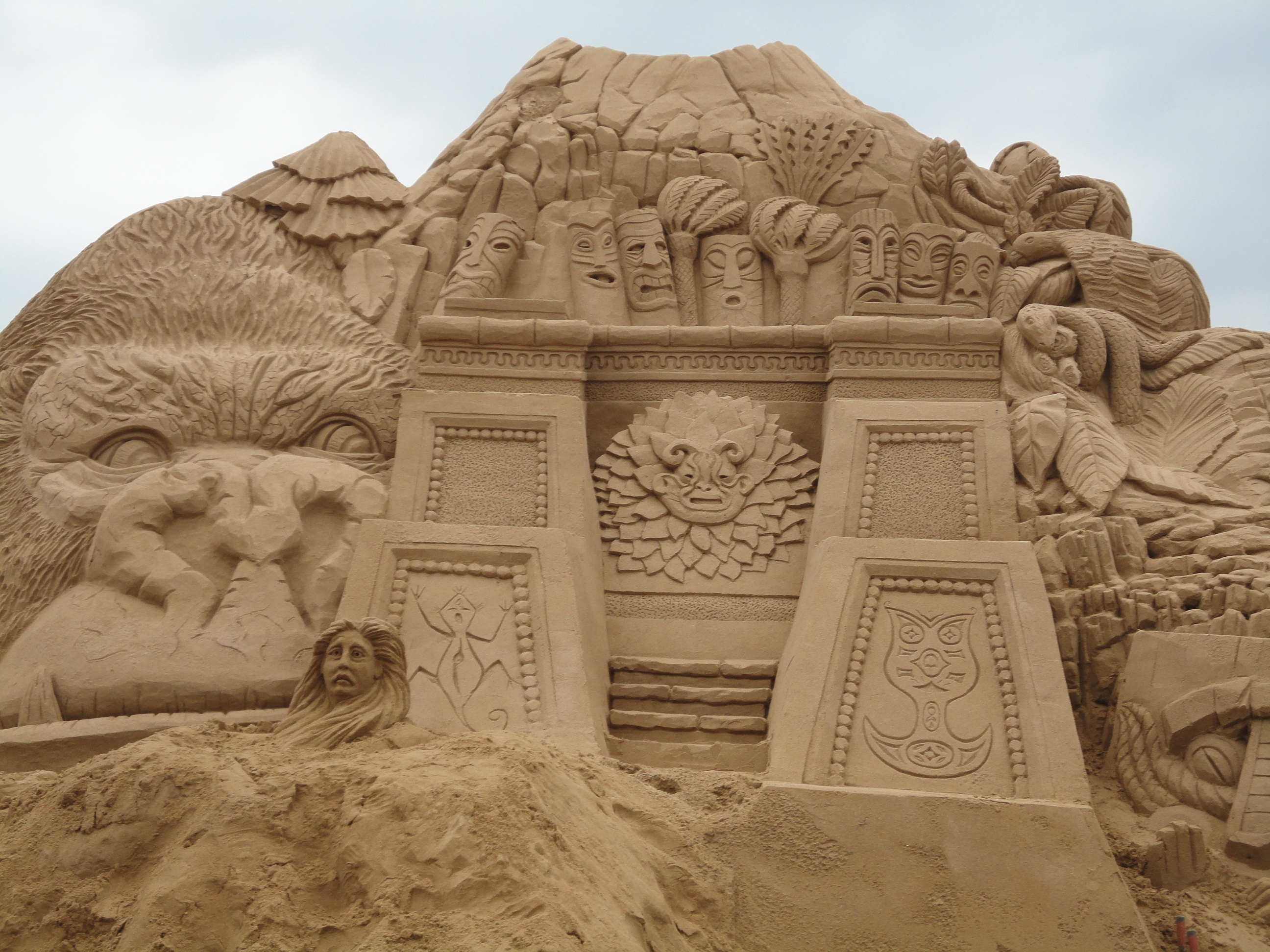 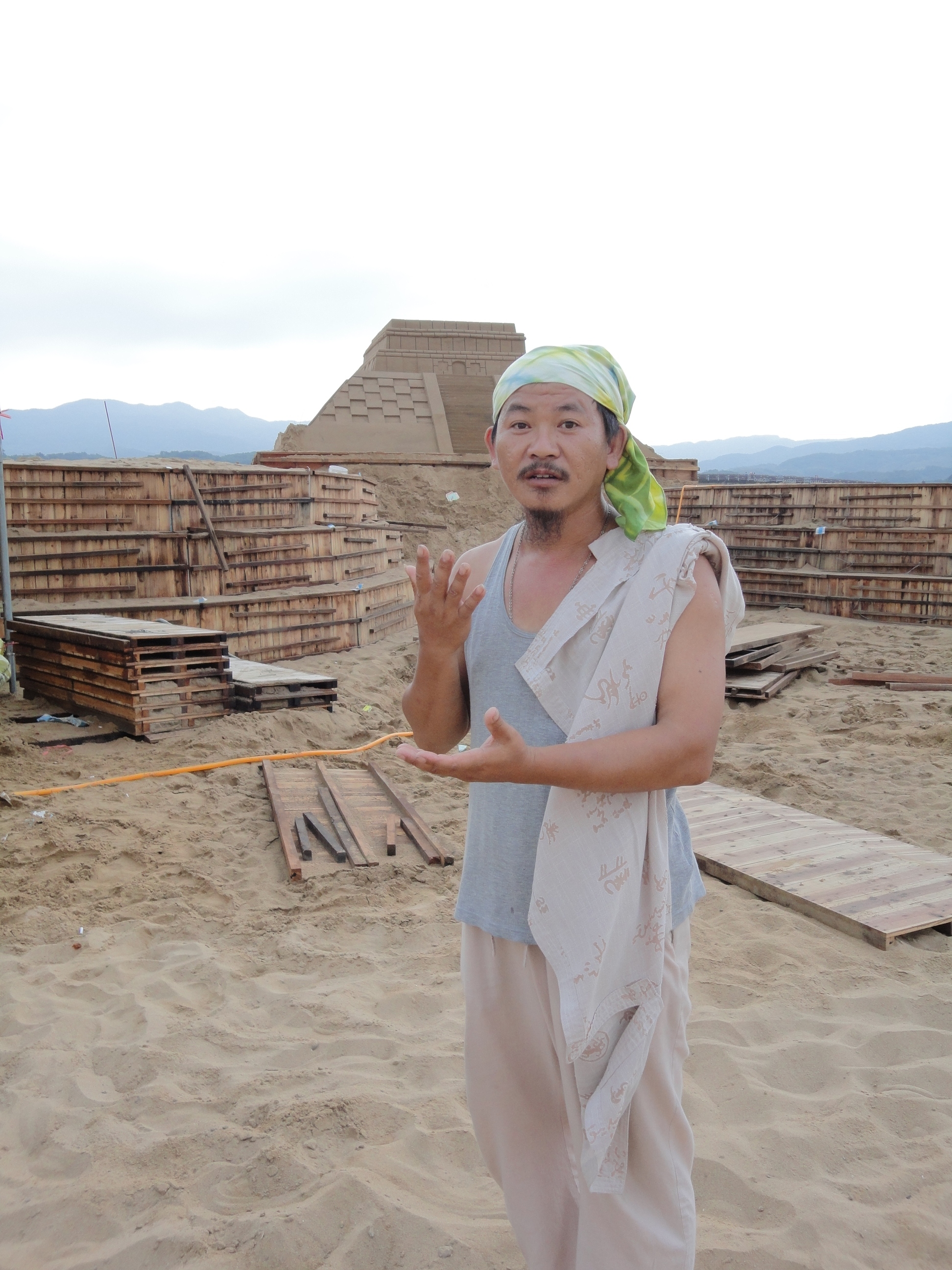 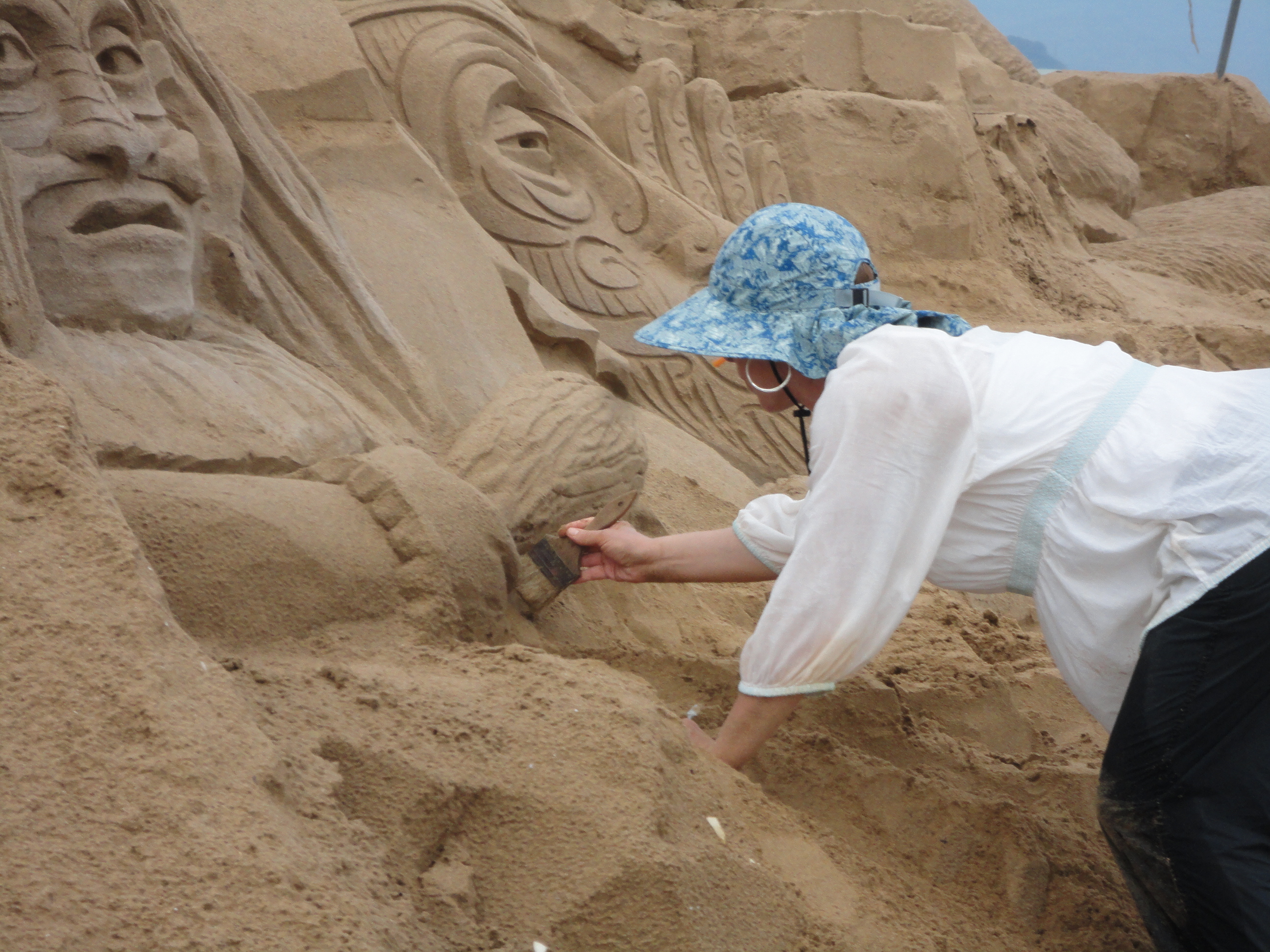 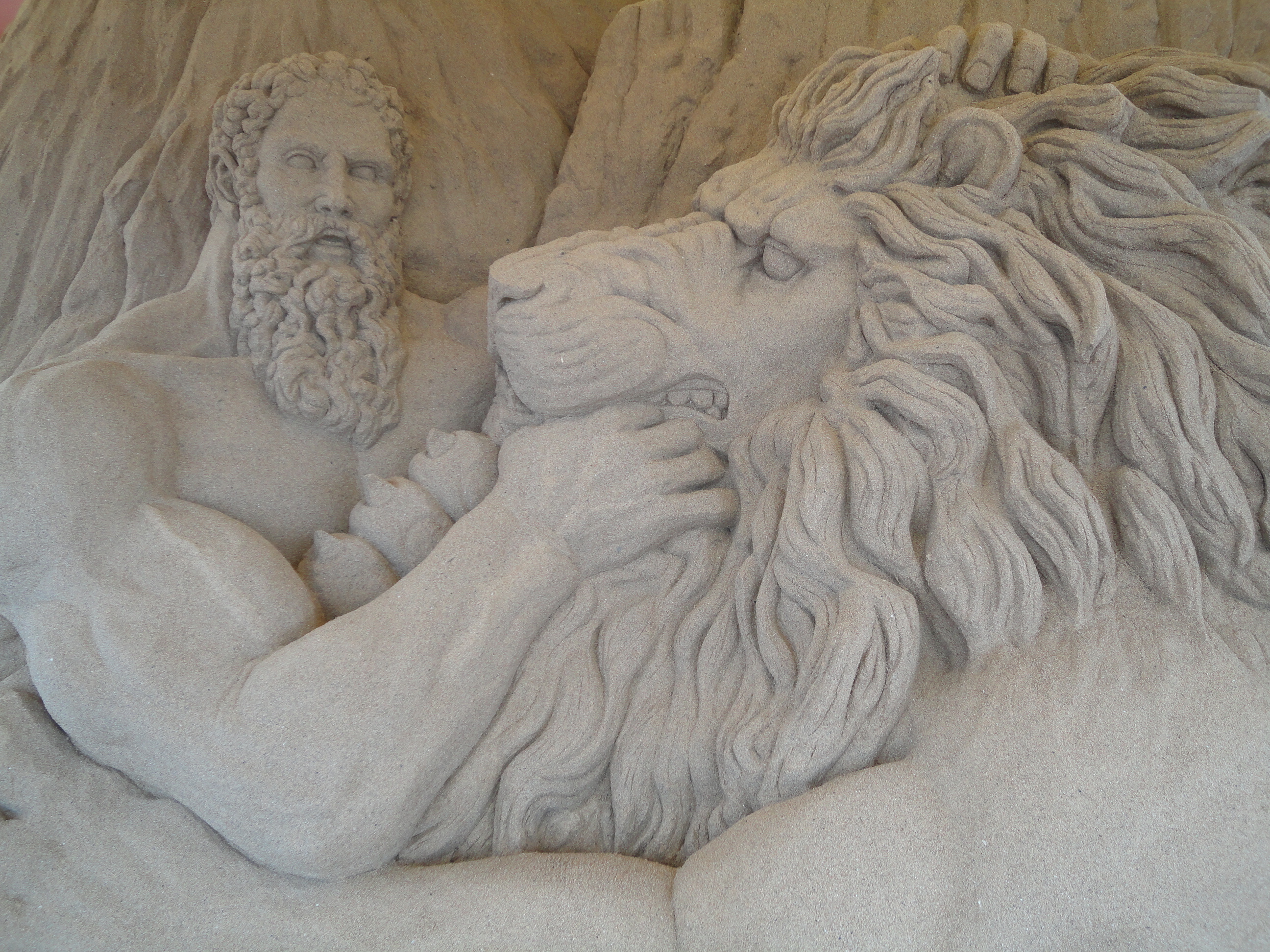 Sandcastle can remind most of us of the joyful moments in our childhood. But this means more to sculptors on Fulong Beach bathing in sweat, working under the sun to perfect their creations, for the visitors to the Sand Sculpture Festival that kicks off tomorrow.
Titled "A Fantastic World," the festival features spectacular three-dimensional sand sculptures built by both international and domestic teams out to astonish beach goers with their grand, vivid, and delicate creations.
Paradise Tiki
The Sand Sculpture Company, a professional sandcastle team from Illinois, U.S.A. presents the seven-meter-tall, 16-meter-wide "Paradise Tiki." Heroes from the movie King Kong and The Jungle Book play with wild animals such as snakes, panthers, tropical birds, and tigers in the paradise. The team came up with their design in March after receiving the invitation earlier this year to participate in the festival.
"Our theme is great for families," said Ted Siebert, head of the Company. "The characters are popular among children, who usually recognize the story right away." Eight years ago, the Company visited Taiwan for the first time and made their work based on Harry Potter, another popular tale among kids.
"The days working on the beach have been perfect. The teamwork is going on well; everything goes according to the plan," said Siebert.
It was not as smooth eight years ago in Yenliao, another beach in the northeast coast of Taiwan, where the team lost the top of the tall castle they built. So this time Siebert and his team have made a "big and fat" sculpture.
"Each member of the team has an expertise, such as carving, molding, and painting. Charlie has been working on King Kong's hair for four days straight," he said referring to Charlie Beaulieu. They met each other in earlier competitions.
The Company has bagged 7 Guinness World Records and many world championships since its establishment in 1986.
"I started out joining competitions, and didn't know it would turn out to be a full time job," said Siebert, who plans to go on a skiing holiday this year. "I don't build sand castles in my off time, and I don't walk on the beach when I spend time with my family in our summer house."
Next year, the Company plans to come back with an even bigger project, a circus, or American indigenous culture, with the Tepee and all.
One-man team
Fans of Greek mythology would find Japanese sculptor Toshihiko Hosaka's work very familiar, because he chose Hercules (or Heracles), the son of Zeus and Alcmene, and the Nemean lion, a vicious monster whose hide was impervious to weapons, as his subjects. In the story, the first of Hercules' twelve labors assigned by King Eurystheus (his cousin), was to slay the Nemean lion and bring back its pelt.
Hosaka began sculpting when he studied in the Tokyo National University of Fine Arts and Music in the late nineties. He was invited to make sand sculptures in Canada and Germany in previous years. This is his first visit to Taiwan.
"I chose famous Greek mythology figures so people know who they are," he said while he molded Heracles' hands. Muscle and body lines are this sand sculptor's specialty.
"The facial expression of Heracles fighting the lion is the most complicated part."
Hosaka arrived May 5th, started building the lion before it collapsed on the 9th, right in front of him. He had to start again from zero.
"The way it fell apart was a first for me, even though it was not the first time my work crumbled," he said calmly, "I re-designed my work and combined Heracles and Nemean lion together."
But he worries about something happening to his work during the night. For him, beach sand in Taiwan is something new and it is much softer than in Japan. Besides sand sculpturing, Hosaka makes comic figures with clay in Japan.
Trip around the world
Taiwan is a comparatively small island whose nationals have the ambition of being one of the best in the world. Take the works of the Taiwan team for example, Mayan pyramid, Leaning Tower of Pisa, the Burj Al Arab in Dubai, and the Sydney Opera House. Walking among them is like going on a trip around the world.
"We built the Mayan architecture at the center as a metaphor for the sun, and the rays around it are famous world architecture," said sculptor Wang Song-guan, creator of the design, adding that the branches also provide support for the main structure.
"Sand is like powder. You cannot have it either too dry or too wet, and you have to find the angle to allow the light coming from the sides instead of the front," the experienced sculptor said.
"When you get a hold of the basics, just enjoy the sun and the relationship with nature."
Wang founded The Sculpture Park of Jing Lim in the central Taiwan town of Nantou in 1998. Spread over an area of 6,600 square meters, the Park offers a relaxing hide-out among pineapple fields, and plenty of sculptures by Wang and his associates.
It's summer time. Don't hesitate, just hop on the train.