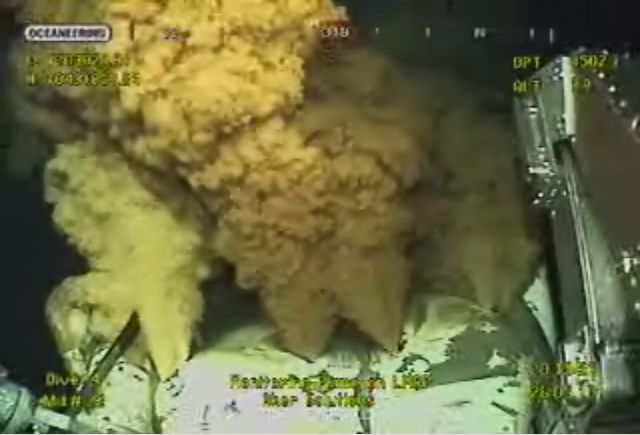 After BP began pumping heavy mud into the leaking well in the Gulf of Mexico, executives said that there had been no problems so far, but they said engineers would not know until at least yesterday afternoon whether the latest remedy was having some success.
If the risky procedure, known as a top kill, stops the flow, BP would then inject cement into the well to seal it. The top kill has worked above ground but has never before been tried 5,000 feet (1,500m) beneath the sea. BP pegged its chance of success at 60 to 70 percent.
"We're doing everything we can to bring it to closure, and actually we're executing this top kill job as efficiently and effectively as we can," BP Chief Operating Officer Doug Suttles said.
Fishermen, hotel and restaurant owners, politicians and residents along the coast are fed up with BP's failures to stop the oil that is coating Louisiana's marshes and the wildlife that relies on them. The anger has turned toward President Barack Obama and his administration. Polls show the public is souring on their handling of the catastrophe.
The gusher, which has spewed 7 million gallons (26.5 million liters) of crude by the most conservative tallies, began after an offshore drilling rig exploded April 20, killing 11 workers. Dozens of witness statements obtained by The Associated Press show a combination of equipment failure and a deference to the chain of command aboard the rig impeded the system that should have stopped the gusher before it became an environmental disaster.
Additional leaks springing from the top kill solution were a grave risk, said Anil Kulkarni, a mechanical engineering professor at Penn State.
"One scenario is that it may make things worse," Kulkarni said. "If it ruptures all over, then it would be even more difficult to close it."
Suttles said BP had not detected any new leaks as of Wednesday night.
He said within the next day, if oil stops flowing to the surface, then engineers will know the drilling fluid being pumped in was starting to work. Engineers were monitoring the well's pressure readings constantly to determine how much oil was escaping.
If not, the company had several backup plans, including sealing the well's blowout preventer with a smaller cap. An earlier attempt to cap the blowout preventer failed. BP could also try a "junk shot" - shooting golf balls and other debris into the blowout preventer to clog it up - during the top kill process.
Last week, the company inserted a mile-(1.6km) long tube to siphon some of the oil into a tanker. The tube sucked up 924,000 gallons (3.5 million liters) of oil, but engineers had to dismantle it during the top kill.
A permanent solution would be to drill a second well to stop the leak, but that was expected to take a couple months.
Some 100 miles (160km) of Louisiana coastline had been hit by the oil, the Coast Guard said.
When will they stop the oil and can they? They were questions on the lips of residents in Grand Isle at the bottom tip of Louisiana.
"Certainly there's hope. But the reality for us is that whether they cap it or not, we're still going to have an ecological and economic disaster down here, one that we don't know whether or not we'll be in a position to recover," Jefferson Parish Sheriff Newell Normand said.
In Pass a Loutre, the odor wafting above the oily water was that of an auto shop.
"There's no wildlife in Pass a Loutre. It's all dead," Plaquemines Parish President Billy Nungesser said.
Louisiana-raised Democratic strategist James Carville has been critical of the administration response and hoped Obama's visit Friday would change that.