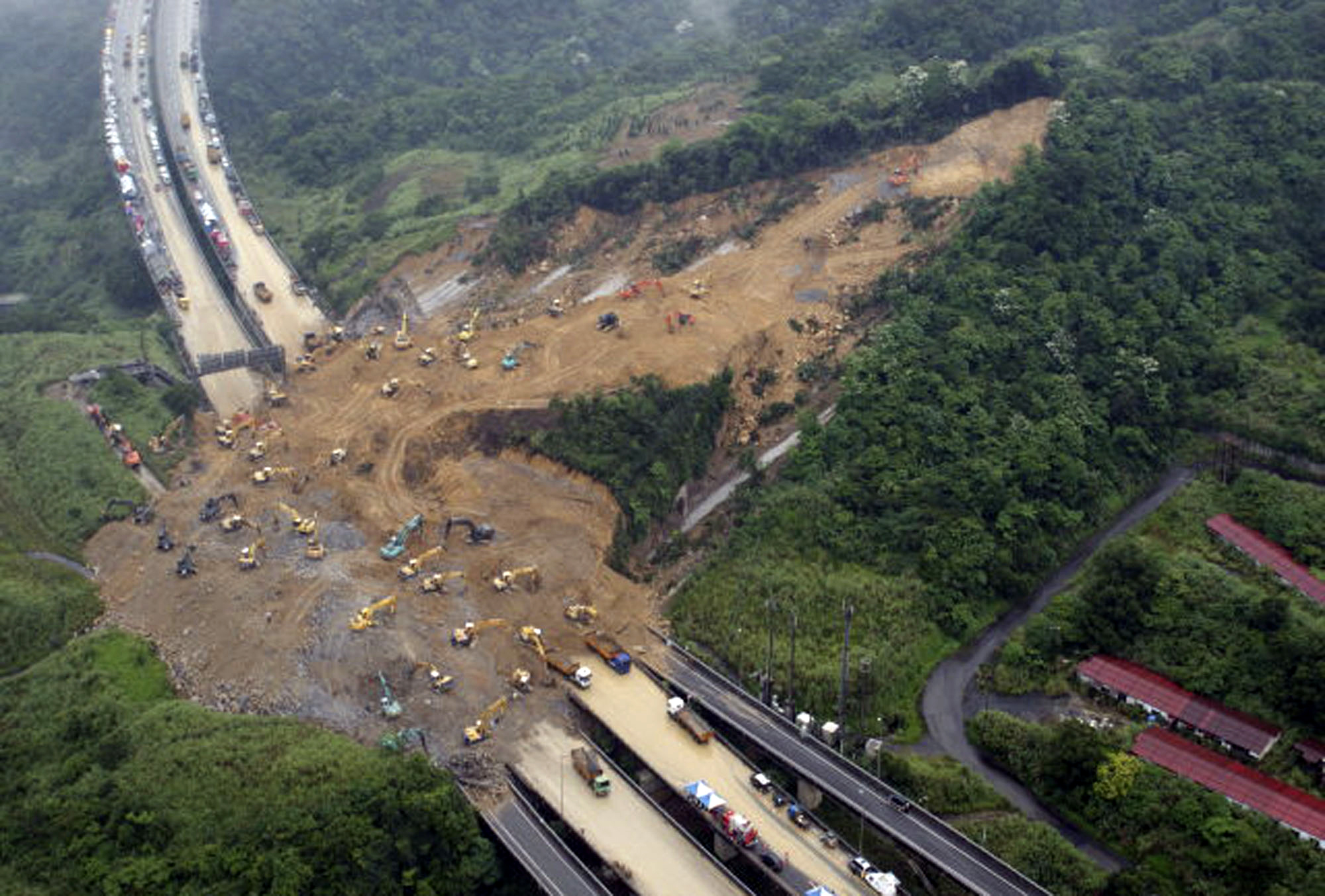 Rescue workers yesterday found a car license plate in the rubble of the landslide on Freeway No.3 near Keelung, but the total of missing persons went up to five.
A total of four cars were now believed buried after the side of a hill collapsed and covered the full width of the freeway over a length of 300m.
A 55-year-old man, a 55-year-old woman taxi driver, and a 32-year-old woman with a friend were originally believed to have been buried under the rocks in three separate cars. Yesterday morning, relatives reported a 34-year-old Kaohsiung businessman surnamed Chang as missing.
In a first sign that the relief operation was moving closer to the missing persons, workers dug up the badly mangled license plate of the black Mercedes Benz driven by the 32-year-old woman surnamed Li. There was no sign of the car itself or of its two occupants, reports said.
Police phoned 117 owners of cars recorded by cameras as having passed through a nearby toll station on the northbound section of the freeway within 10 minutes before the landslide. There are no toll stations on the southbound section.
A team from Keelung's Chang Gung Memorial Hospital with two ambulances was standing by to help possible survivors, reports said.
Over a thousand relief workers have been digging non-stop since shortly after the disaster happened Sunday afternoon.
They have been using dozens of excavators, more than 100 trucks to take away the earth, and special equipment to find traces of life under the rocks, though these were of limited use because of the depth of the soil. By yesterday noon, they had removed 31,000m3, or 15 percent of the total of 200,000m3 estimated to have covered the freeway.
Relatives of the missing spoke to Vice Premier Eric Liluan Chu at the scene of the landslide yesterday afternoon. They expressed their concern that the rescue effort was not moving fast enough.
The government could still give no clear explanation of why the landslide happened without rain or earthquake. The geological structure of the collapsed hill, known as a dip slope, was thought to be responsible for the landslide. An added element suspected to have played a role in the disaster was the state of anchors supposed to stop the rocks from covering the road.
National Taiwan University geologist Chen Wen-shan said the disaster was manmade, because if people had not built a road there in the first place, there would have been no landslide.
The anchors might have rusted after a decade, or their design might have been faulty, leaving them not strong enough to keep the hill in place, Chen said.
The Ministry of Transportation said it wanted to know within three days how many more dip slopes were situated along Taiwan's roads. Reports mentioned nine such locations in the same area, and 32 nationwide.
The fear for dip slopes also spread to the real estate market, with the Taipei City Government refusing to reveal the locations of an estimated 135 buildings close to similar geological flashpoints.
The refusal was aimed at preventing the real estate value of the apartments in the affected complexes from falling too fast, reports said.
The city is reportedly considering the installation of monitoring systems in the areas.