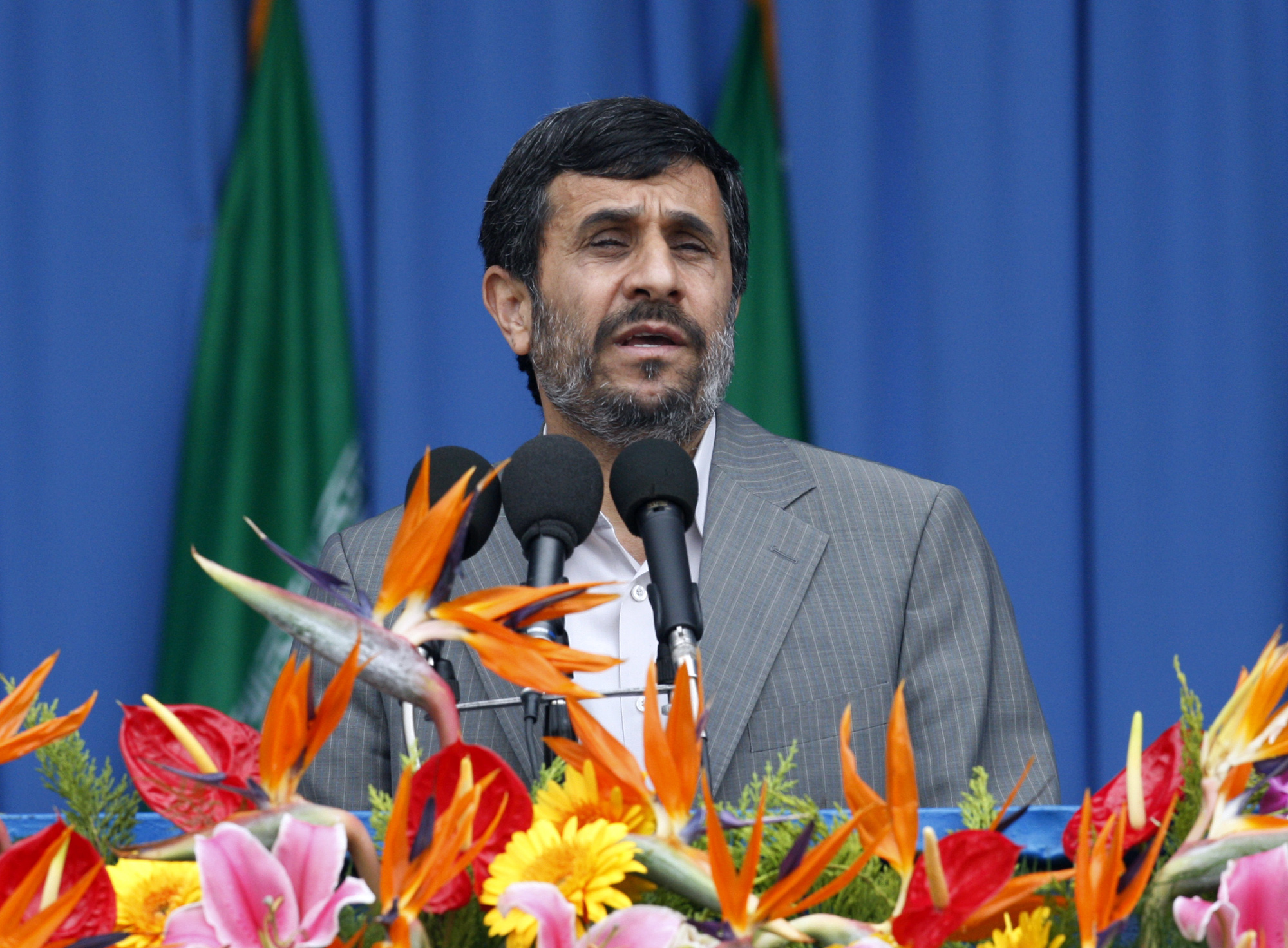 I take it personally: Iran's president, Mahmoud Ahmadinejad, wants to murder me, my family and my people. Day in, day out, he announces the imminent demise of the "Zionist regime," by which he means Israel. And day in, day out, his scientists and technicians are advancing toward the atomic weaponry that will enable him to bring this about.
The Jews of Europe (and Poles, Russians, Czechs, the French, etc.) should likewise have taken personally Adolf Hitler's threats and his serial defiance of the international community from 1933 to 1939. But he was allowed, by the major powers and the League of Nations, to flex his muscles, rearm, remilitarize the Rhineland and then gobble up neighboring countries. Had he been stopped before the invasion of Poland and the start of World War II, the lives of many millions, Jews and Gentiles, would have been saved. But he wasn't. And it doesn't look like Ahmadinejad will be either. Not by the U.S. and the international community, at any rate. President Obama, when not obsessing over the fate of the ever-aggrieved Palestinians of the West Bank and Gaza Strip, proposes to halt Ahmadinejad's nuclear program by means of international sanctions. But here's the paradox: The wider Obama casts his net to mobilize as many of the world's key players as he can, the weaker the sanctions and the more remote their implementation. China, it appears, will only agree to a U.N. Security Council resolution if the sanctions are diluted to the point of meaninglessness (and maybe not even then). The same appears to apply to the Russians. Meanwhile, Iran advances toward the bomb. Most of the world's intelligence agencies believe that it is only one to three years away.
Perhaps Obama hopes to unilaterally implement far more biting American (and, perhaps, European) sanctions. But if China and Russia (and some European Union members) don't play ball, the sanctions will remain ineffective. And Iran will continue on its deadly course.
At the end of 2007, the U.S. intelligence community, driven by wishful thinking, expediency and incompetence, announced that the Iranians had in 2003 halted the weaponization part of their nuclear program. Last week, Obama explicitly contradicted that assessment. At least the American administration now publicly acknowledges where it is the Iranians are headed, while not yet acknowledging what it is they are after - primarily Israel's destruction.
Granted, Obama has indeed tried to mobilize the international community for sanctions. But it has been a hopeless task, given the selfishness and shortsightedness of governments and peoples. Sanctions were supposed to kick in in autumn 2009; then it was December; now it is sometime late this year. Obama is still pushing the rock up the hill - and Ahmadinejad, understandably, has taken to publicly scoffing at the West and its "sanctions."
He does this because he knows that sanctions, if they are ever passed, are likely to be toothless, and because the American military option has been removed from the table. Obama and Secretary of Defense Robert M. Gates - driven by a military that feels overstretched in Afghanistan, Pakistan and Iraq and a public that has no stomach for more war - have made this last point crystal clear.
But at the same time, Obama insists that Israel may not launch a pre-emptive military strike of its own. Give sanctions a chance, he says. (Last year he argued that diplomacy and "engagement" with Tehran should be given a chance. Tehran wasn't impressed then and isn't impressed now.) The problem is that even if severe sanctions are imposed, they likely won't have time to have serious effect before Iran succeeds at making a bomb.
Obama is, no doubt, well aware of this asymmetric timetable. Which makes his prohibition against an Israeli pre-emptive strike all the more immoral. He knows that any sanctions he manages to orchestrate will not stop the Iranians. (Indeed, Ahmadinejad last week said sanctions would only fortify Iran's resolve and consolidate its technological prowess.) Obama is effectively denying Israel the right to self-defense when it is not his, or America's, life that is on the line.
Perhaps Obama has privately resigned himself to Iran's nuclear ambitions and believes, or hopes, that deterrence will prevent Tehran from unleashing its nuclear arsenal. But what if deterrence won't do the trick? What if the mullahs, believing they are carrying out Allah's will and enjoy divine protection, are undeterred?
The American veto may ultimately consign millions of Israelis, including me and my family, to a premature death and Israel to politicide. It would then be comparable to Britain and France's veto in the fall of 1938 of the Czechs defending their territorial integrity against their rapacious Nazi neighbors. Within six months, Czechoslovakia was gobbled up by Germany.
But will Israeli Prime Minister Benjamin Netanyahu follow in Czech President Edvard Benes' footsteps? Will he allow an American veto to override Israel's existential interests? And can Israel go it alone, without an American green (or even yellow) light, without American political cover and overflight permissions and additional American equipment? Much depends on what the Israeli military and intelligence chiefs believe their forces - air force, navy, commandos - can achieve. Full destruction of the Iranian nuclear project? A long-term delay? And on how they view Israel's ability (with or without U.S. support) to weather the reaction from Iran and its proxies, Hezbollah, Hamas and Syria.
An Israeli attack might harm U.S. interests and disrupt international oil supplies (though I doubt it would cause direct attacks on U.S. installations, troops or vessels). But, from the Israeli perspective, these are necessarily marginal considerations when compared with the mortal hurt Israel and Israelis would suffer from an Iranian nuclear attack. Netanyahu's calculations will, in the end, be governed by his perception of Israel's existential imperatives. And the clock is ticking.
Benny Morris is the author of many books about the Middle East conflict, including, most recently, "1948: A History of the First Arab-Israeli War." He wrote this for the Los Angeles Times.