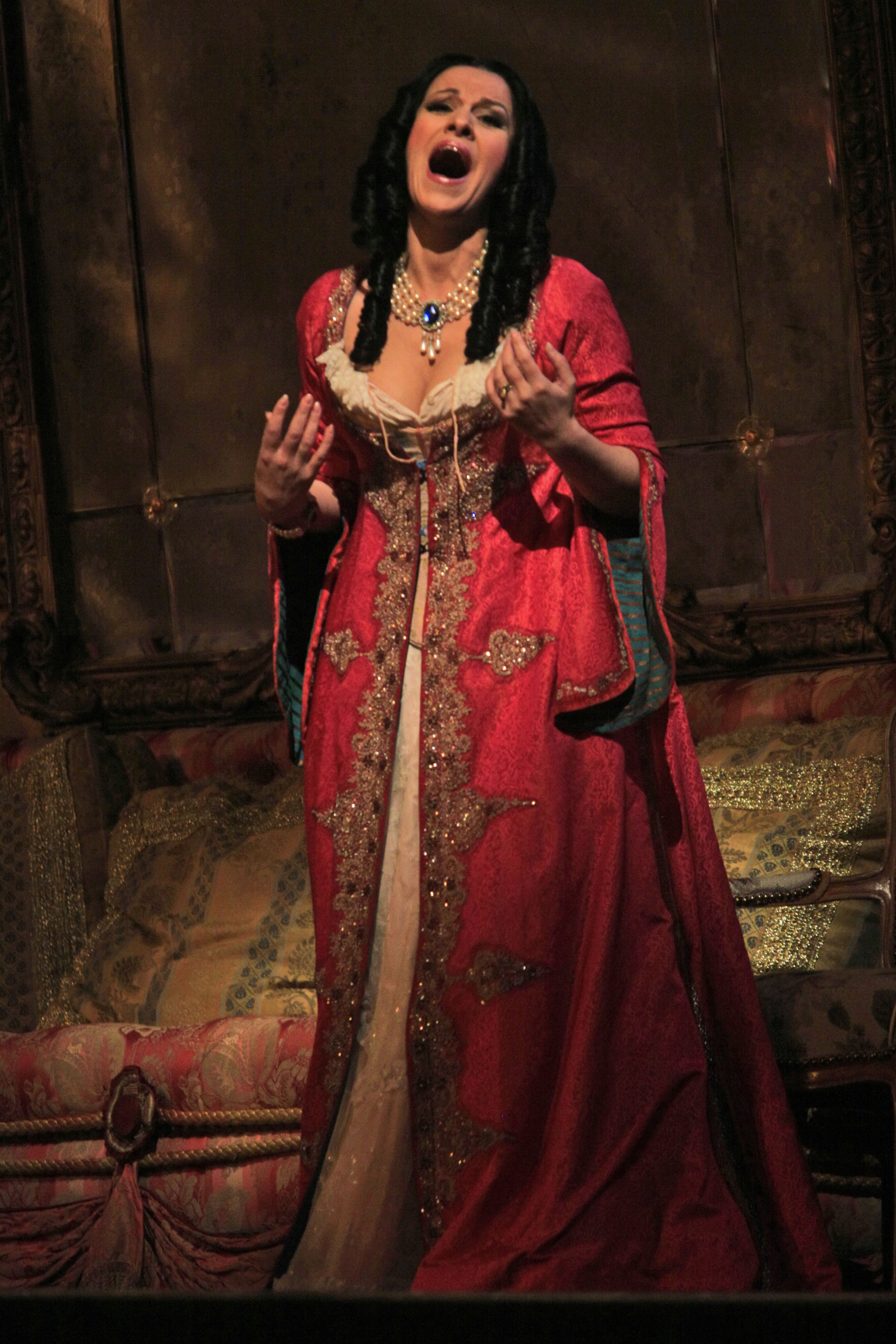 After suffering the musical equivalent of a train wreck, the Metropolitan Opera got its revival of "La Traviata" back on track for the second performance by switching conductors.
Gone was Leonard Slatkin, who presided over last night's season premiere of the Verdi opera with a striking lack of coordination between the orchestra and singers. In his place Saturday night was Met mainstay Marco Armiliato - only four hours after he had led a matinee performance of another Verdi work, "Aida." Even a routine performance by Armiliato would have come as a relief, but the audience got something better: an expert hand guiding the delicate and tuneful score that allowed two top-notch veterans and one promising newcomer to shine in their roles.
Verdi's tale of the courtesan Violetta, who finds true love, gives it up, and then dies of tuberculosis, is first and foremost a showcase for a singer who can capture the glamor and pathos of the role in her acting and her voice. Romanian soprano Angela Gheorghiu fulfills the requirements as well as anyone singing the role today. Gheorghiu's voice, while not large, expands with melting beauty on the notes leading up to high C. At the very top she sounded stressed on Saturday night, and sometimes her pitch wandered flat when she sang softly in the lower part of her voice. But overall her performance was affecting, especially in her death scene when she is reunited with Alfredo, the lover she renounced to spare his family the taint of scandal.
That part was taken by American tenor James Valenti, who is making his Met debut in these performances. He has a light and easy lyric sound, as well as tall, dark good looks that count as a distinct asset on stage. He also managed an impressive high C at the end of his second-act cabaletta, a note avoided by many tenors. He fell short only in the third-act confrontation with Violetta, where his voice seemed slightly underpowered for the dramatic climaxes. As his father, Giorgio Germont, American baritone Thomas Hampson was more robust of voice than he has sounded on some recent occasions. He made a strong impression in the scene in which he persuades Violetta to give up his son, as well as in the aria that follows, "Di Provenza il mar," as he comforts the brokenhearted lad.
Slatkin, who had never before conducted "La Traviata," originally was hired to lead a revival of John Corigliano's "The Ghosts of Versailles." When the company scrapped that production to save money, he was offered the Verdi work instead.
Even he may have had doubts about how it was going to work out, writing in his blog during rehearsals:
"It seems like I am the only person who has never performed Traviata. This causes some raised eyebrows." After scathing opening night reviews, he withdrew from the run for what the company tactfully called "personal reasons."
Armiliato, by contrast, has frequently conducted "Traviata" at the Met and has worked with Gheorghiu, who has a reputation for being willful about choosing her own tempi. His experience paid off on Saturday, despite the obvious lack of rehearsal time.