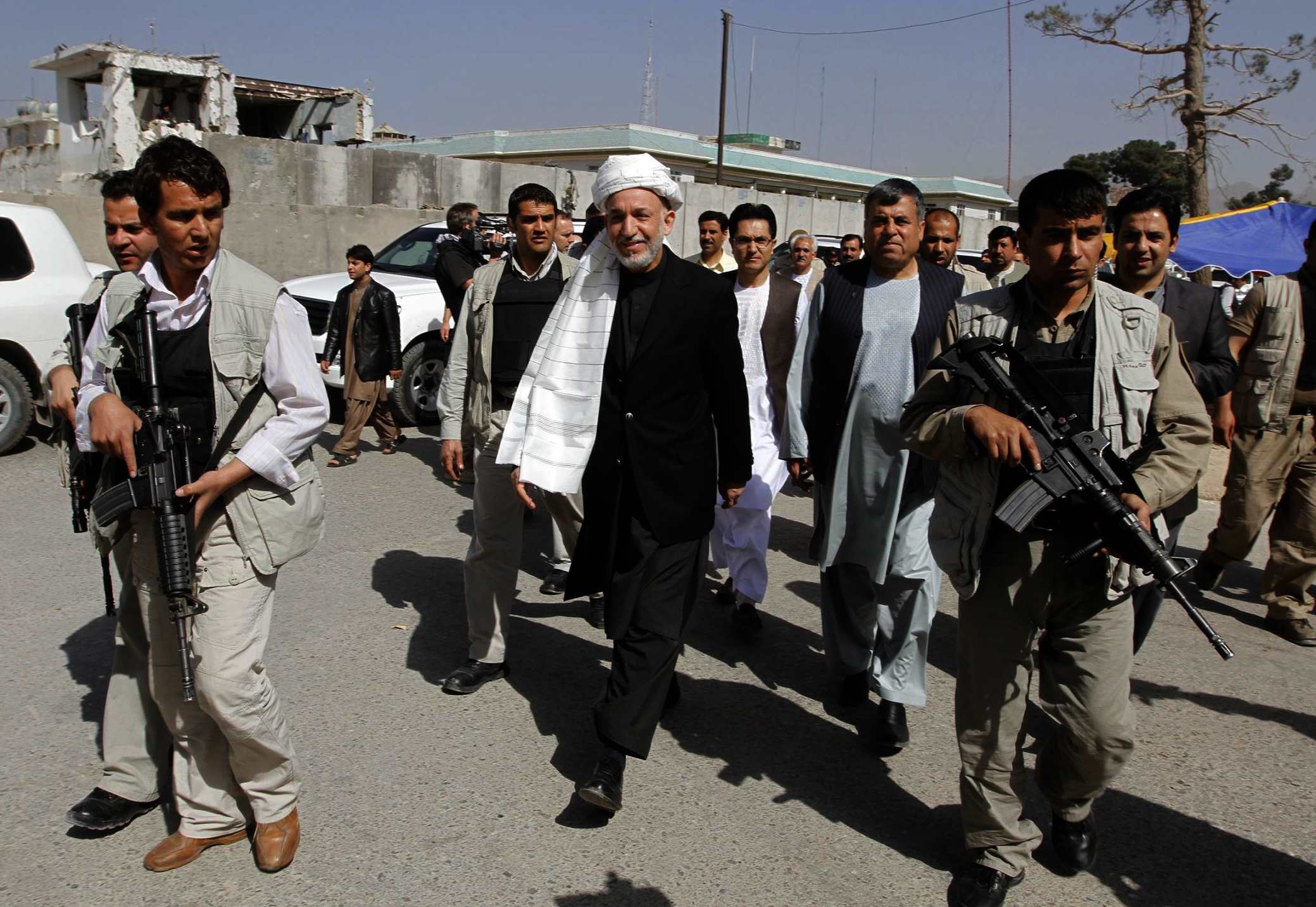 NATO forces said they killed 10 militants in a raid on a compound near the Pakistani border early yesterday, while gunmen seriously wounded an Afghan provincial councilwoman in a drive-by shooting in the country's increasingly violent north.
Meanwhile, NATO confirmed that international troops were responsible for the deaths of five civilians, including three women, in February. Such killings have inflamed frictions between the government of President Hamid Karzai and his Western backers.
A NATO statement said a joint international-Afghan patrol fired on two men mistakenly believed to be insurgents in the Feb. 12 incident in Gardez, south of Kabul. It said the three women were "accidentally killed as a result of the joint force firing at the men."
Family members said they were awaiting formal notice of the NATO admission.
In yesterday's raid, which began around 2 a.m. local time, U.S. troops backed by Afghan army and police forces moved on a compound in Nangarhar province's Khogyani district after receiving reports of militant activity there, the international forces command said in another statement.
They were fired on with heavy weapons and 10 militants were killed and one wounded in the ensuing firefight, the statement said. A search of the compound found automatic rifles, rocket-propelled grenades, material for building roadside bombs, and communications equipment, NATO said. It said no civilians were harmed in the operation.
In the latest of a series of targeted assassination attempts blamed on militants, Baghlan provincial council member Nida Khyani was struck by gunfire in the leg and abdomen in Pul-e Khumri, the capital of the northern province, said Salim Rasouli, head of the provincial health department. Khyani's bodyguard was also slightly injured in the attack.
There was no immediate claim of responsibility for the shooting, although suspicion immediately fell on Taliban fighters who often target people working with the Afghan government and their Western backers.
In the national parliament in Kabul, a lawmaker from Baghlan province shared details of the attack and lamented the security problems female officials face in Afghanistan.
"It happened in the center of the city," said Shaukria Esakhil. "How can a woman work under these kinds of conditions?"
One month ago, a member of the Afghan national parliament escaped injury when her convoy was attacked by Taliban insurgents in eastern Afghanistan. Female government officials regularly report receiving threats to their safety. Some women leaders, including a prominent policewoman, have been assassinated.
The Taliban rigidly oppose education for girls and women's participation in public affairs, citing their narrow interpretation of conservative Islam and tribal traditions. Militants, who are strongest in the south and east, carry out beatings and other brutal punishments for perceived women's crimes from immodesty to leaving home unaccompanied by a male relative.
NATO, meanwhile, is under constant pressure to prevent killings of civilians in military operations, amid concerns it only serves to boost support for the insurgency and undermine Karzai's weak government.
NATO conceded the Feb. 12 killings in Gardez were the result of faulty intelligence and that its forces had killed the two men because they believed they posed a threat to their personal safety. On the night of the attack, the family had been celebrating the birth of a grandson.
"We deeply regret the outcome of this operation, accept responsibility for our actions that night, and know that this loss will be felt forever by the families," spokesman Brig Gen. Eric Tremblay said in the statement.
"We now understand that the men killed were only trying to protect their families," he said. International forces were working with Afghan security partners to improve coordination and "help prevent such mistakes from happening again," Tremblay said.
Tremblay said initial reports that the dead women had been bound and gagged before the raid had been apparently based on a misinterpretation of Islamic burial customs, which require bodies be shrouded for speedy burial.
Typically limbs are bound to allow the body to be more easily lifted into the grave.
International force officials will discuss the results of the investigation with family of those killed, apologize and provide compensation, he said.
The two men killed in the Gardez raid had been long-serving government loyalists and opponents of al-Qaeda and the Taliban, one serving as provincial district attorney and the other as police chief in Paktia's Zurmat district.
Their brother, who also lost his wife and a sister, said he learned of the investigation result from the Internet, but had yet to receive formal notice.