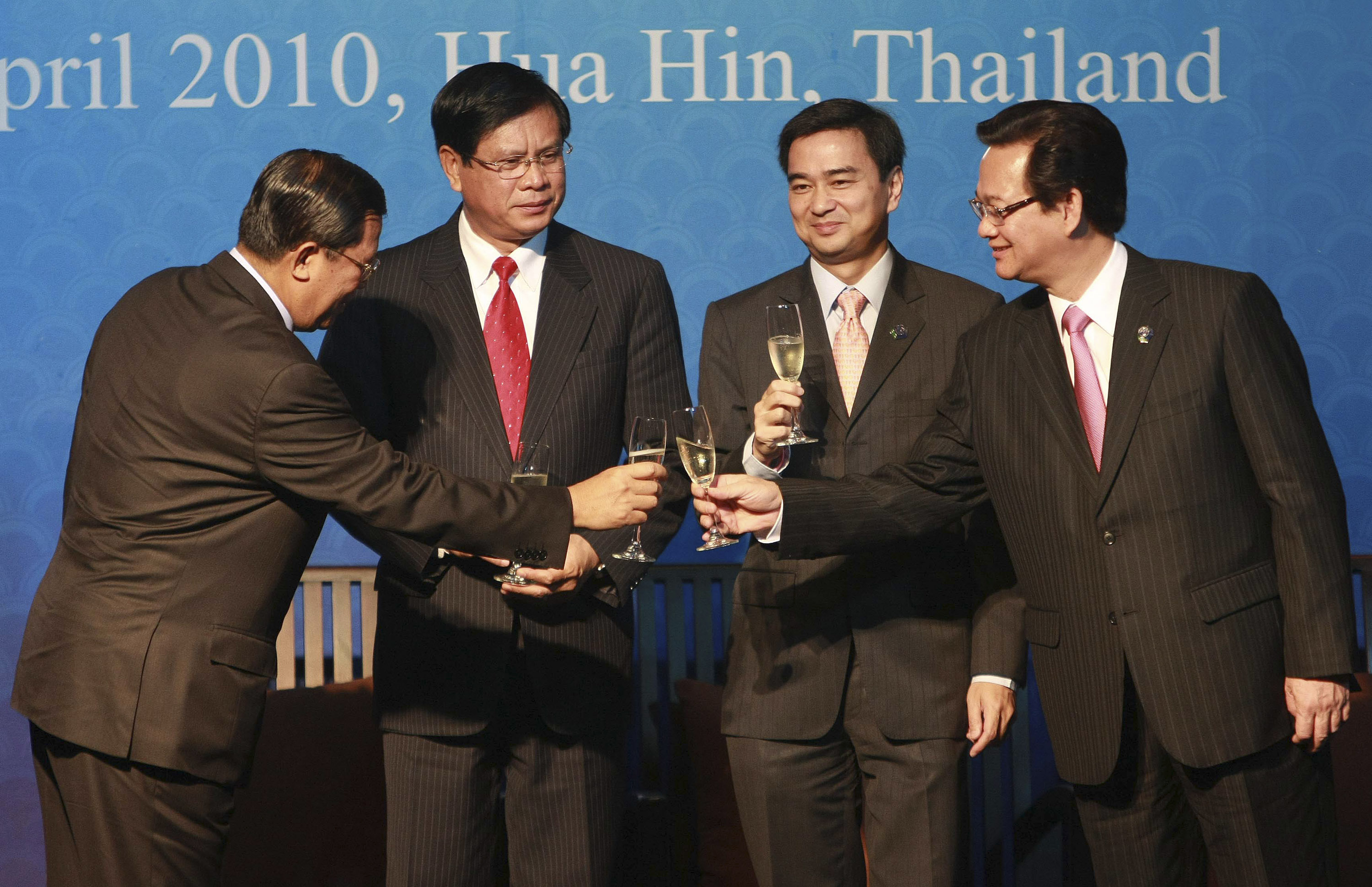 China strongly rejected claims that its dam-building policies are environmentally harmful, as the four downstream countries through which Asia's mighty Mekong River flows agreed yesterday to step up protection and promotion of the waterway.
Leaders of the four Mekong Basin nations - Thailand, Laos, Cambodia and Vietnam - held a one-day meeting to address climate change and other challenges to the health of the river, which provides jobs and sustenance to some 65 million people in six countries. "This summit is sending a message, that all the countries in the Mekong Region, both its upper and lower parts, are stakeholders, and we all have to take joint responsibility for its long term sustainability," Thai Prime Minister Abhisit Vejjajiva said in an opening speech.
The meeting of the member-nations of the Mekong River Commission, along with China and Myanmar comes as the Mekong's water levels are at their lowest in nearly 20 years.
The commission's scientists say this year's low flow and consequent drought can be attributed to an early end to the 2009 wet season and low rainfall during the monsoons.
But environmental activists have said massive dams being built by China are draining off water from downstream areas, with potentially disastrous consequences for farmers, fishermen and the ecology at large.
China stressed that its dam projects on the Mekong's upper reaches, which China calls the Lancang, do not affect the downstream countries. "China's ongoing hydropower development of the Lancang River has little impact on the water amount and environment of the Lancang River and the lower reaches," said Chinese Vice Minister of Foreign Affairs Song Tao, leading his country's large contingent at the meeting. "Quite the contrary, by way of the regulating effect of the water dams, hydropower development of the Lancang River can improve navigation conditions and help with flood prevention, drought relief and farmland irrigation of the lower reaches," he said.
In response to the concerns of some downstream countries, China took many steps on its own initiative to protect the environment. "Some actions even came at the expense of hydropower development," he said.
Song cited cancellation of a hydropower project to avoid impact on fish migration; construction of an additional reservoir to control water fluctuations; and a large scheme to minimize affecting water temperatures in the river.
In an unusual diplomatic gesture of openness, China last month began releasing to its Mekong neighbors closely held information on dry season water flows in its section of the river, making it easier to forecast problems downstream. "We have started this work and hope that it can help the downstream countries overcome the difficulties brought by the drought at an early date," he said. "China itself is also a victim of the present severe drought," he noted. The release of such information from upstream points in China has been a major concern of the downstream countries seeking early warning to cope with floods and droughts.
Abhisit said the Mekong leaders agreed on areas for "priority action," including researching and addressing the threat to livelihoods posed by climate change, and intensifying efforts to effectively manage the risks from flood, drought and rising sea levels.