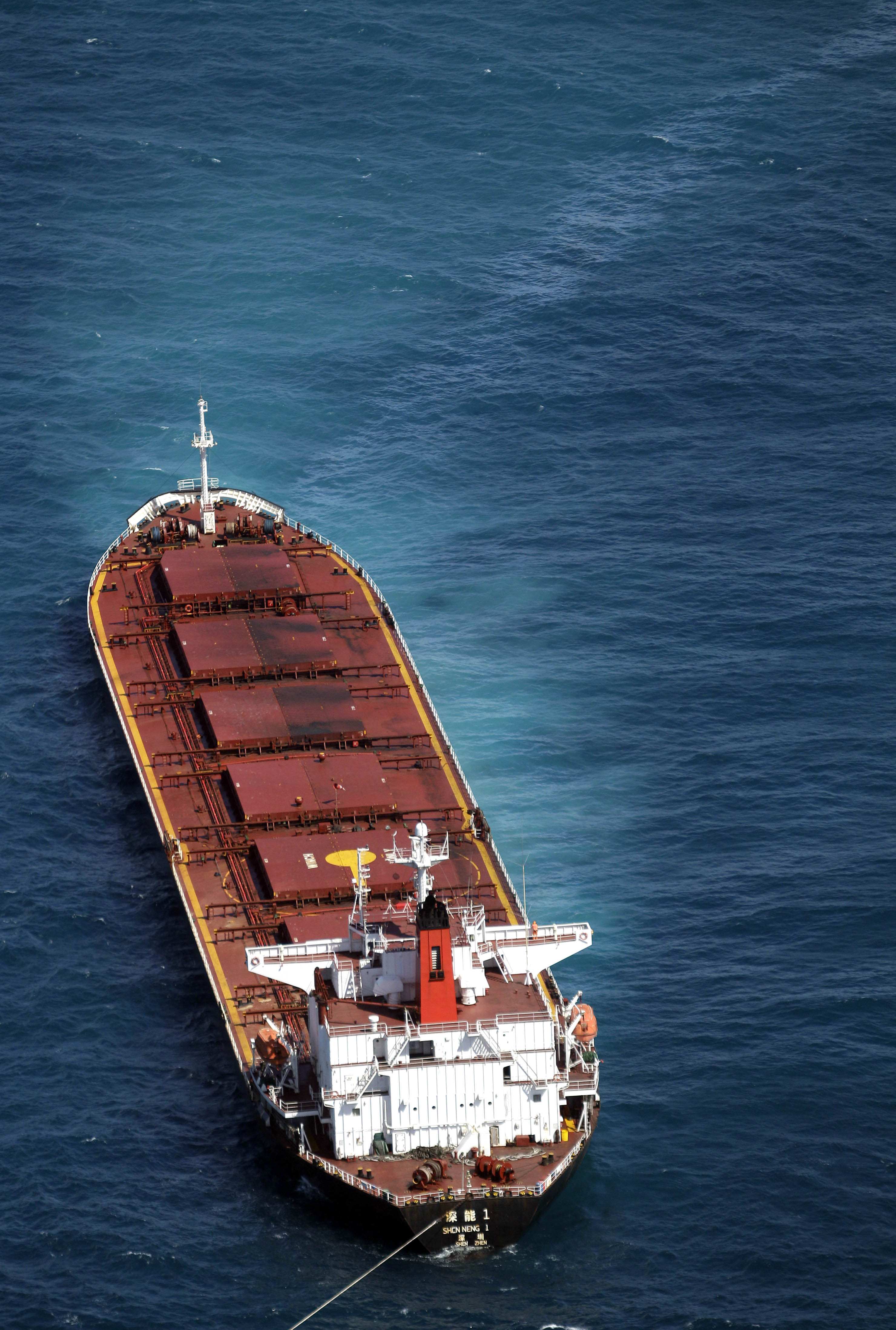 Workers rushed to contain an oil spill yesterday from a coal-carrying ship grounded on Australia's Great Barrier Reef, sending two tugboats to stabilize the vessel so that it would not break apart and further damage the fragile coral beneath.
Traveling at full speed of 10 mph (12 knots, 16 kph), the Chinese-registered Shen Neng 1 rammed into Douglas Shoals late Saturday, an area that has shipping restrictions in order to protect what is the world's largest coral reef and one that is listed as a World Heritage site because of its gleaming waters and environmental value as home to thousands of marine species. About 2 tons (metric tons) of oil have already spilled from the 1,000 tons (950 metric tons) of fuel on board, creating a 100m (yard) slick that stretches 3km (2 miles), Marine Safety Queensland said in a statement.
Queensland State Premier Anna Bligh said a boom will be put around the ship by Tuesday to contain oil leaking from the hull. Aircraft sprayed chemical dispersants in an effort to break up the slick Sunday.
"Our No. 1 priority is keeping this oil off the Barrier Reef and keeping it contained," she told reporters in Brisbane.
Bligh said a salvage team had reached the ship yesterday and were attempting to stabilize it.
The ship's owner, Shenzhen Energy, a subsidiary of the Cosco Group that is China's largest shipping operator, could be fined up to A$1 million (US$920,000) for straying from a shipping lane used by 6,000 cargo vessels each year, Bligh said.
"This is a very delicate part of one of the most precious marine environments on earth and there are safe authorized shipping channels - and that's where this ship should have been," Bligh said.
Authorities fear the ship will break apart during the salvage operation and wreck more coral, or spill more of its heavy fuel oil into the sun-soaked sea. However, Bligh said the risk of the ship breaking apart appeared to have lessened since the first of two tug boats arrived and reduced its movement.
Two tugs arrived yesterday to stabilize the ship, Marine Safety Queensland said. "One of the most worrying aspects is that the ship is still moving on the reef to the action of the seas, which is doing further damage" to the coral and hull, according to the agency's general manager, Patrick Quirk. Initial damage reports showed flooding in the main engine room and damage to the main engine and the rudder.
A police boat was standing by to evacuate the 23 crew members if the ship breaks apart.
The bulk carrier was taking about 72,000 tons (65,000 metric tons) of coal to China from the Queensland port of Gladstone when it slammed into the shoals off Queensland's coast in the Great Barrier Reef Marine Park.
Numerous conservation groups have expressed outrage that bulk carriers can travel through the reef without a specialized marine pilot. Shipping lanes in Australian waters typically require a seasoned captain to go aboard an incoming ship to help navigate around hazards.
Until now, the government has said there is no need for a marine pilots around the protected area because large ships are banned there.