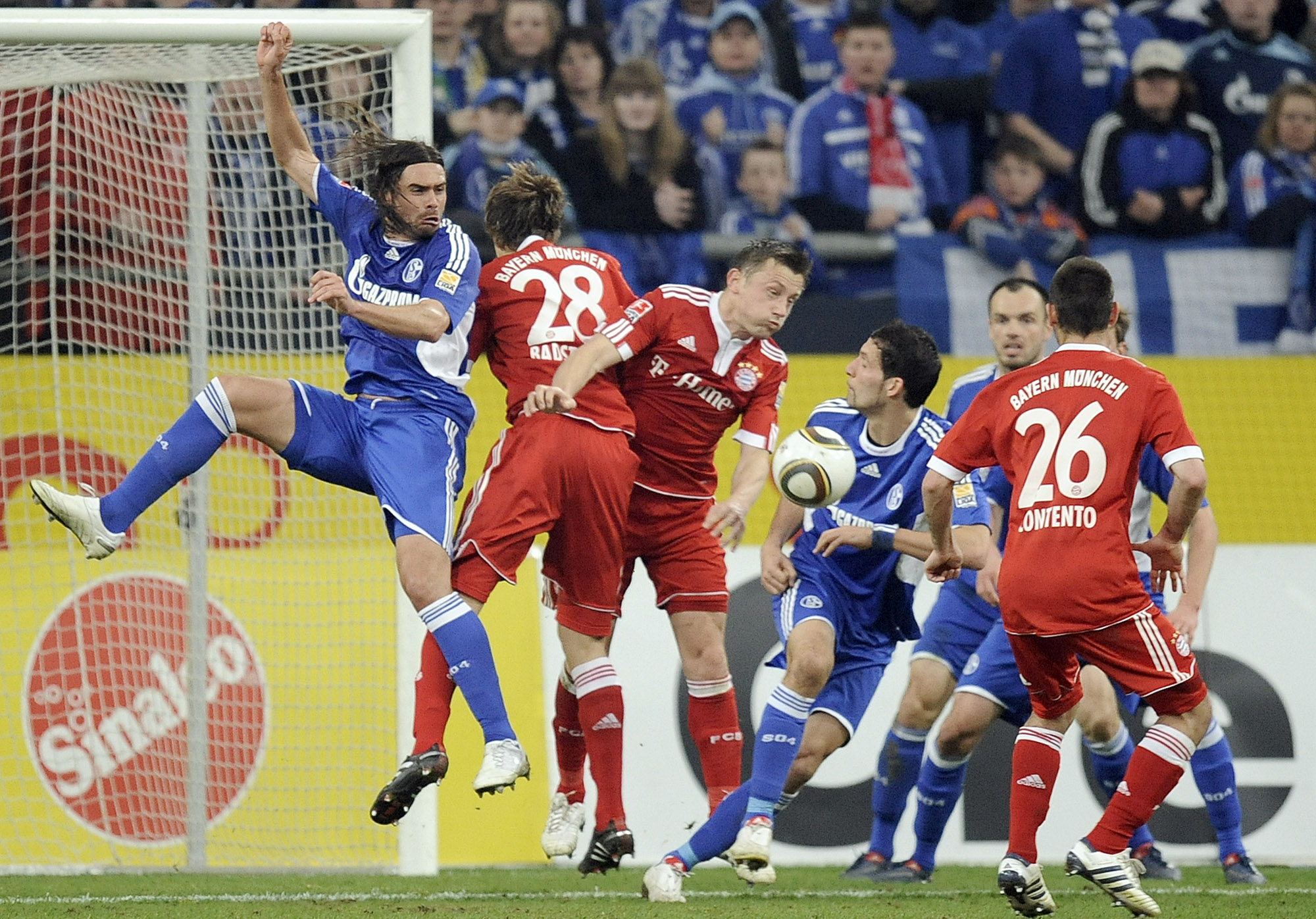 Bayern Munich hailed their win over Bundesliga title rivals Schalke as a perfect tonic as they prepare to finish the job and knock Manchester United out of the Champions League.
Last week's come-from-behind 2-1 quarter-final first leg win over the English giants sent the Bavarians into Saturday's league encounter at a packed Veltins Arena with the wind in their sails despite some poor recent domestic form.
And a 2-1 courtesy of goals from Frenchman Franck Ribery - his fourth of the season - and Thomas Mueller, within a minute of each other, saw Bayern deliver a potential hammer to Schalke's hopes of a first league crown since 1958.
"We are top - and that's where we belong," said delighted skipper Mark van Bommel after his side went a point clear with five games remaining, giving Bayern the perfect psychological boost ahead of their Old Trafford showdown next Wednesday.
Schalke were left reeling after Bayern won on the Royal Blues' home patch for the second time in ten days, adding to their German Cup success, to shrug off recent league losses to Frankfurt and Stuttgart.
Schalke coach Felix Magath, who led Wolfsburg to a stunning title success last season and who was twice a domestic double winner with Bayern before his 2007 sacking, as much as conceded that the race is now pretty much over with the momentum having slipped away from his side.
"After a match such as this none of my players should bother thinking about the title," Magath stormed as Bayern moved onto 59 points from their 29 games to 58 for Schalke.
Schalke scorer Kevin Kuranyi agreed that "we must not get caught up thinking about the title - we have yet to reach our goal for the season, which is qualifying for Europe.
"Today we lost too many balls and lacked a clear head when they went down to ten men (Hamit Altintop was red carded in the first half) and that shows we still lack experience compared with Bayern."
Bayern's Dutch coach Louis van Gaal intimated that he had not been worried about his side being pegged back - even after Kuranyi gave Schalke some hope with a header.
"Even down to ten men I was not worried as I knew Schalke would struggle to produce," insisted the former Barcelona handler.
Ribery, starting a league match for the first time since February 28 after an injury-plagued season, snaffled the opener with a right-foot shot after good work from Bastian Schweinsteiger.
Mueller made it 2-0 after home defender Rafinha could only clear as far as Altintop, who fed Mueller for a neat finish before Kuranyi gave the hosts brief hope of a point.