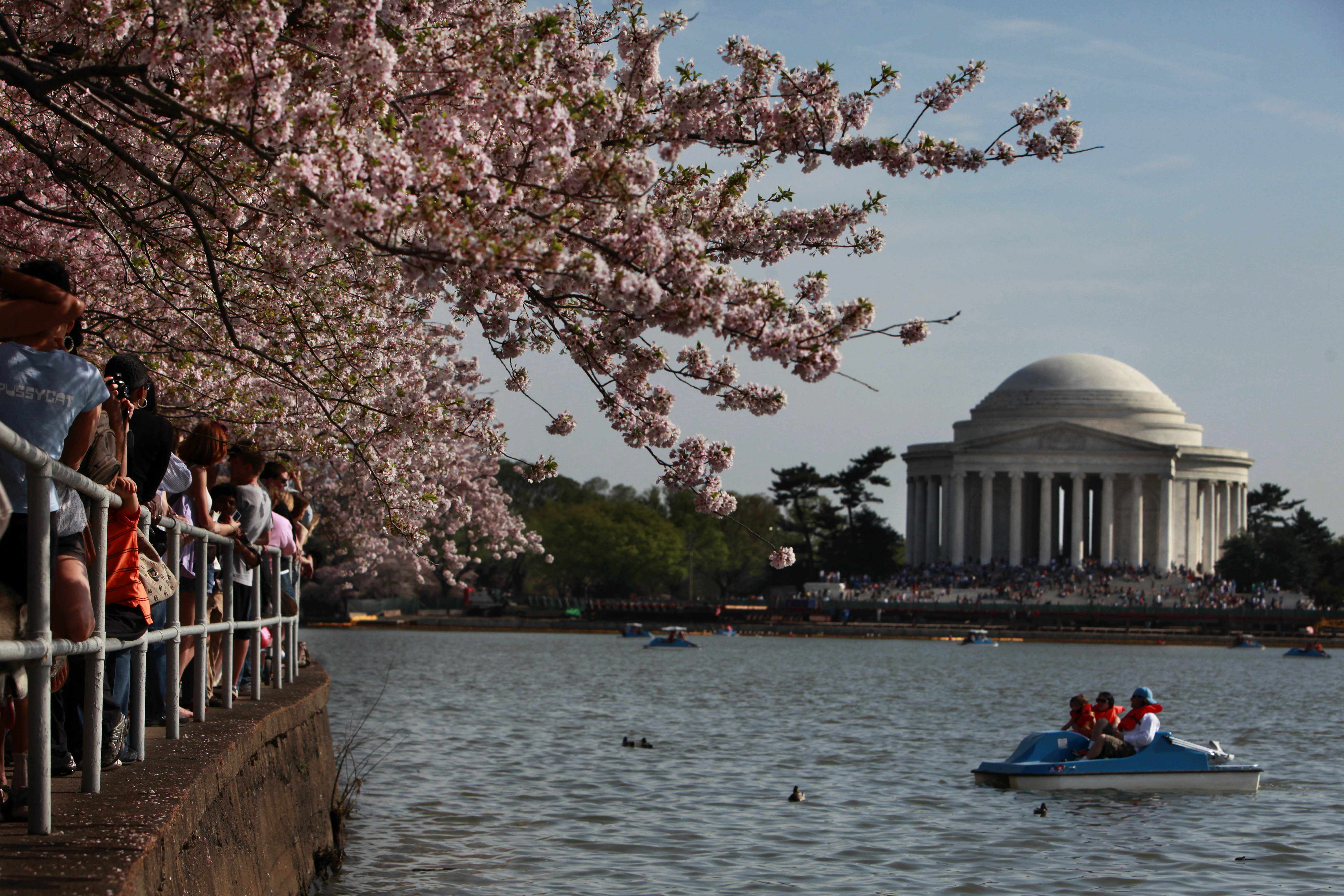 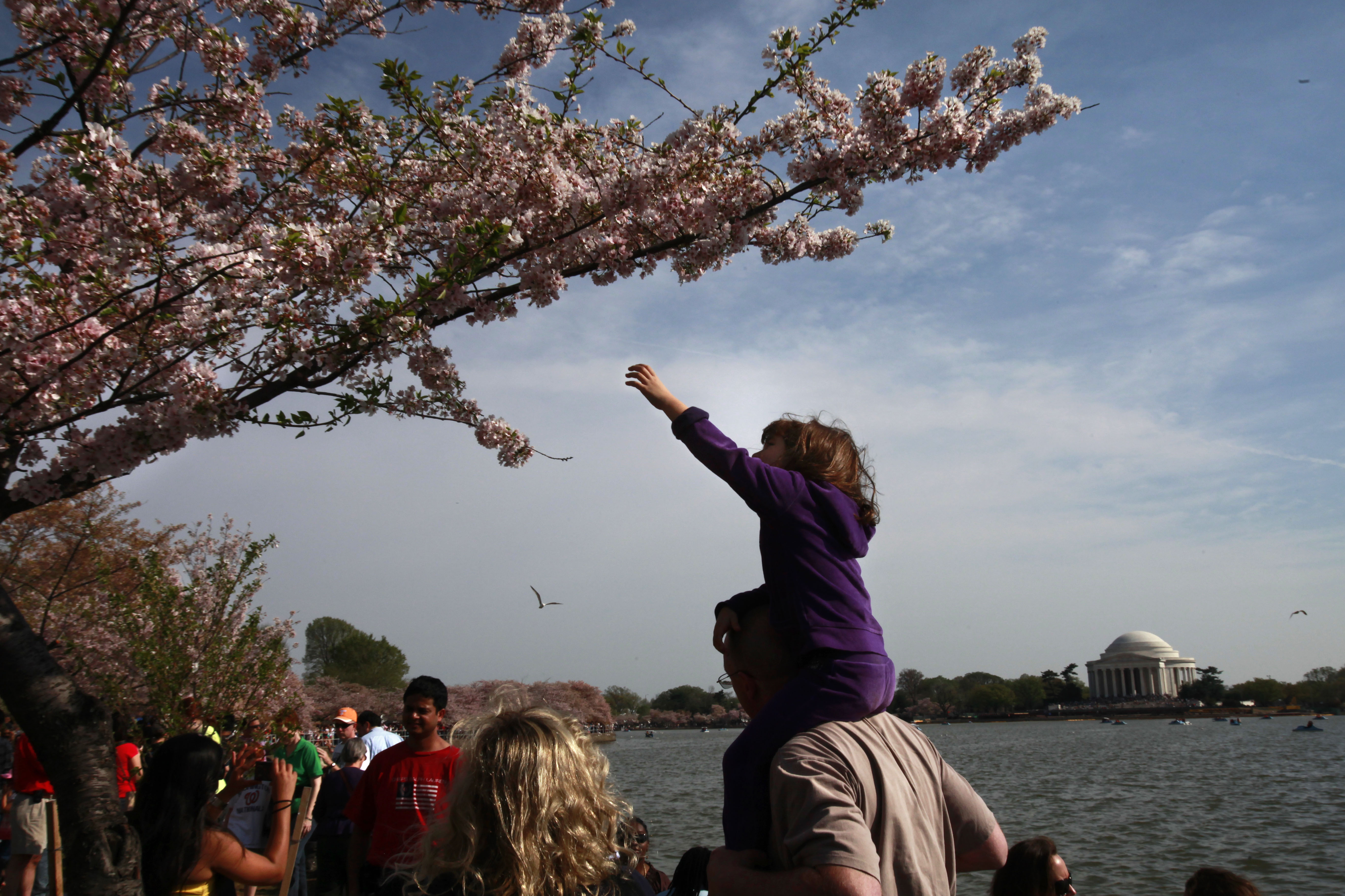 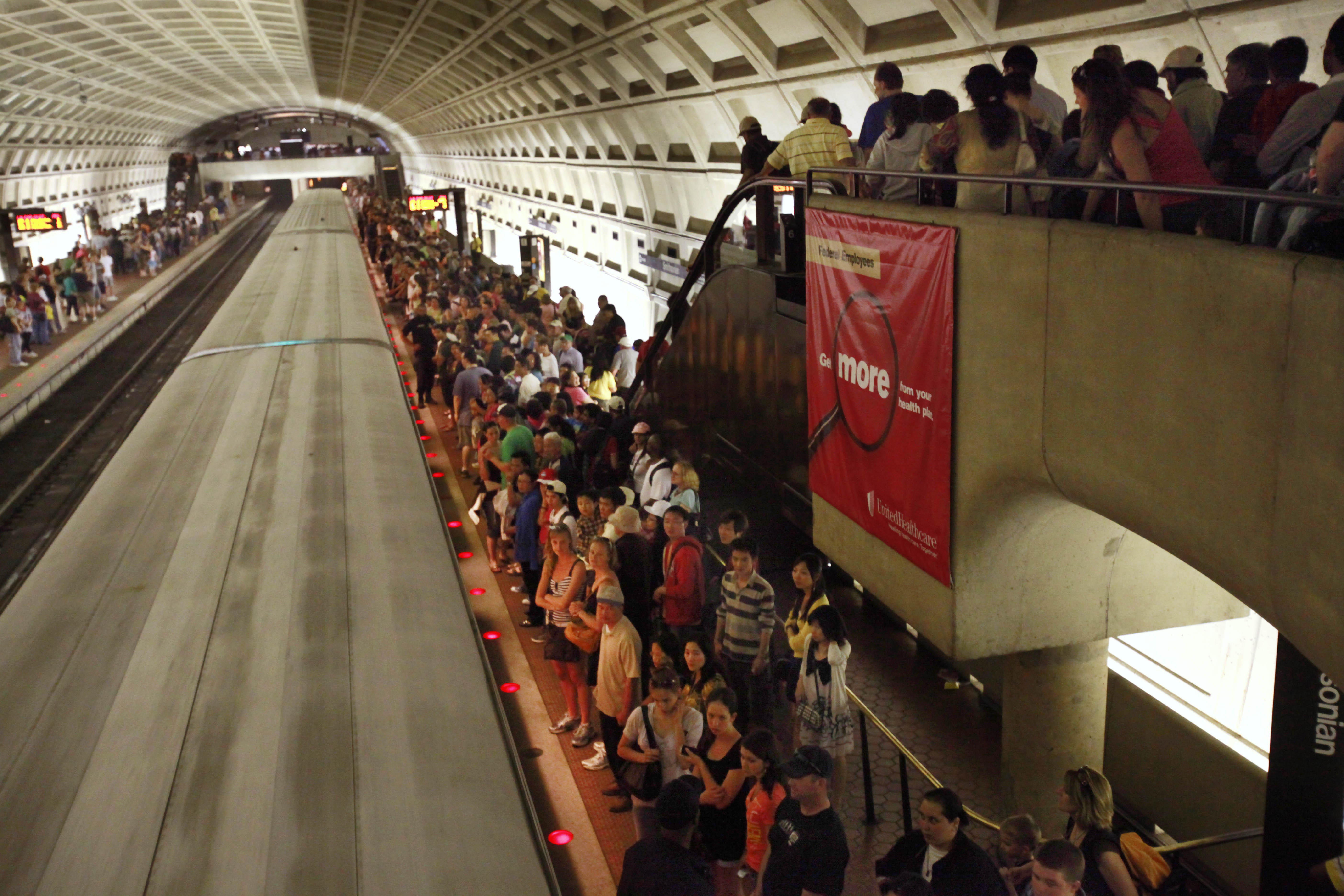 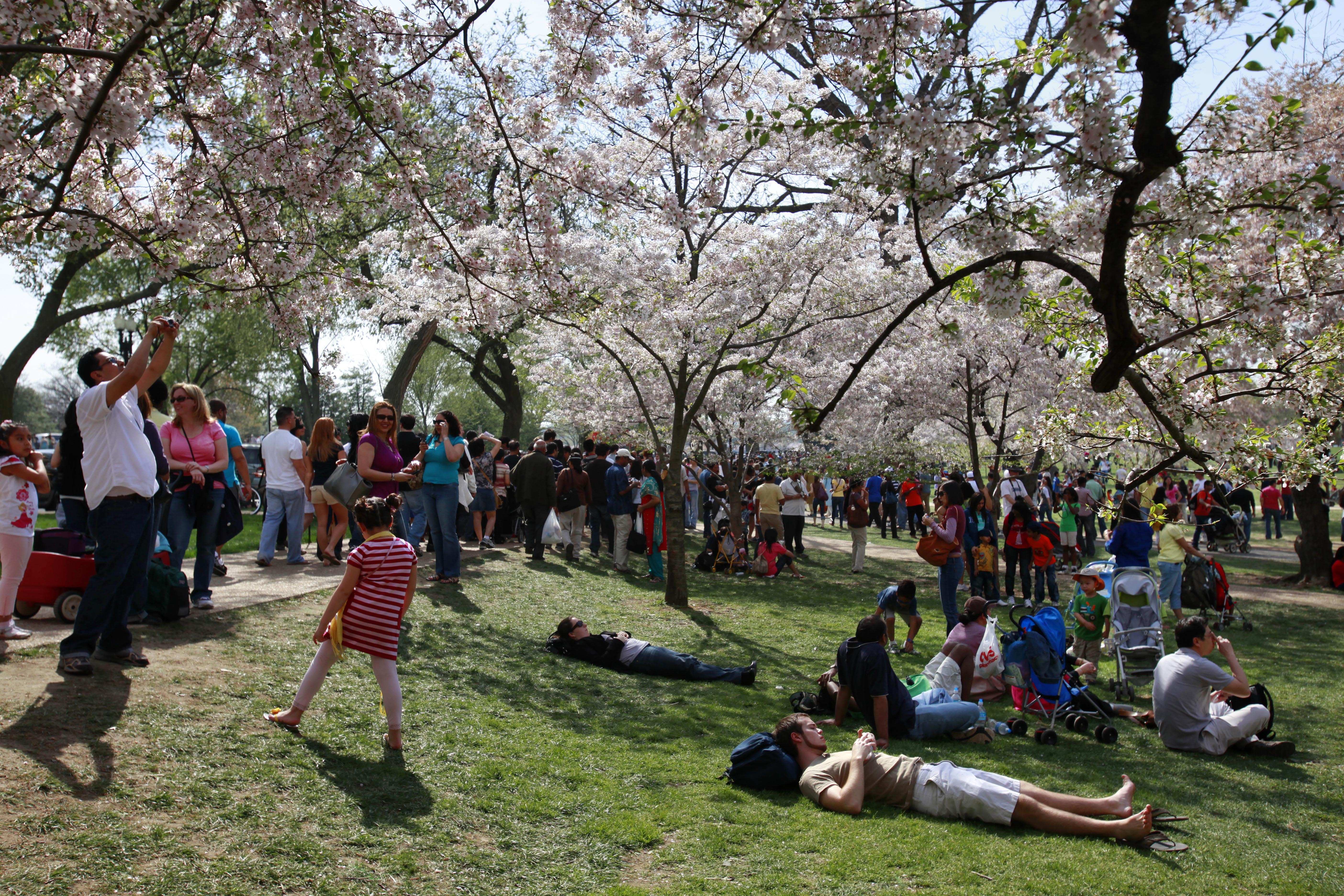 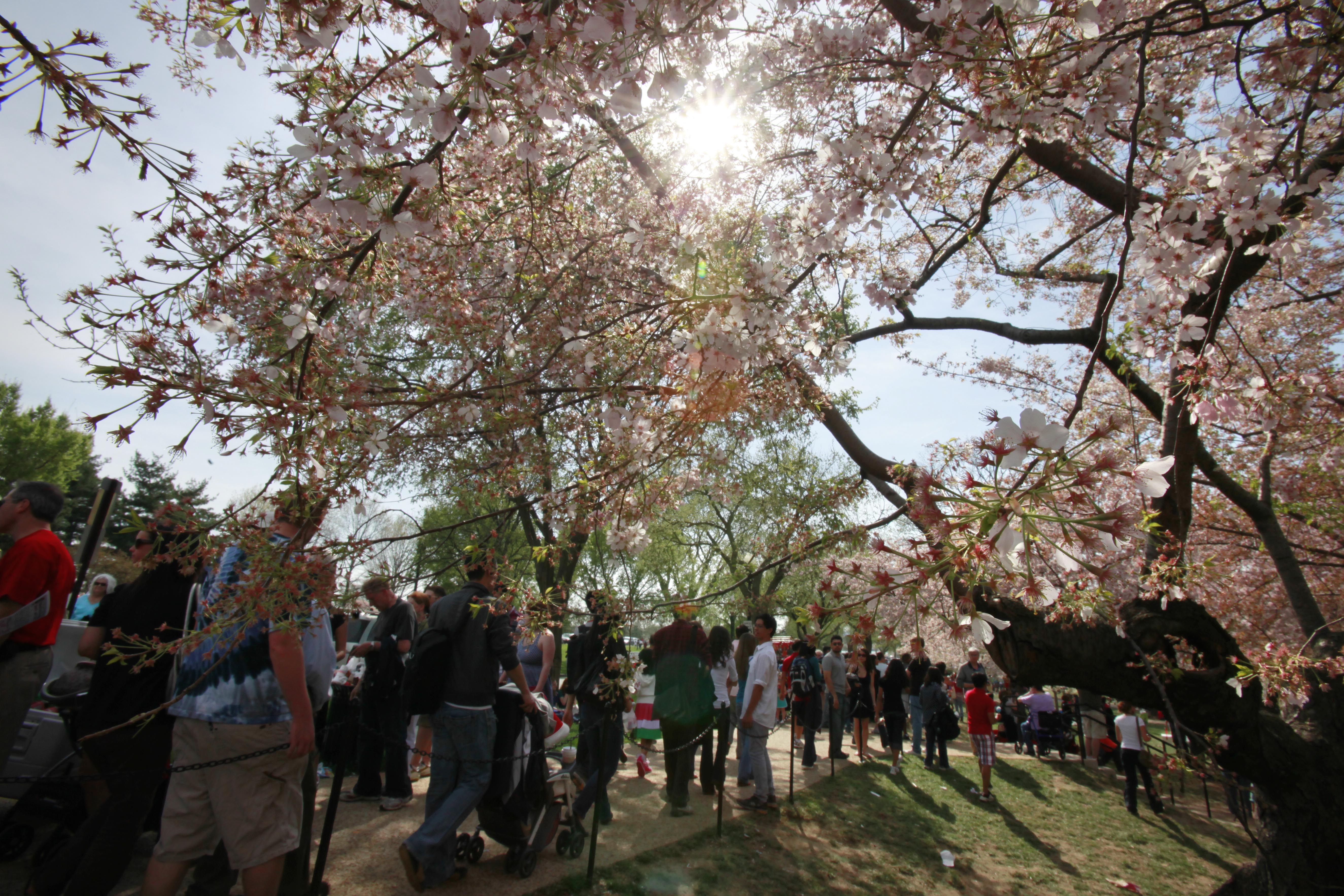 Visitors who want to see Washington's cherry blossom trees can now get their views from a peaceful cruise on the Potomac River, away from the hordes of land-based tourists.
While many of the 1 million-plus visitors over the next two weeks will crowd along a five-mile stretch around the Tidal Basin to see about 300 flowering trees, thousands of others are escaping to the water.
"The flowers and trees are like a picture, a painting," Trang Ha, 27, of Vietnam said during a recent 90-minute cruise with fellow students from the University of Maryland.
From the 65-foot Harbour Belle, about 3,000 cherry blossom trees are visible with the nation's monuments and Capitol dome as a backdrop. Arlington National Cemetery is across the river on the Virginia shore.
A narrator offers a rundown of the area's history, architecture and facts on the different types of cherry trees.
"It's wall to wall pink" by the time the trees are in full bloom, said Eric Slaughter, who captains the boat for Capital Yacht Charters. "The whole city, the skyline, the whole panorama, is suddenly entirely different with the cherry blossoms."
Of course, it's not all picturesque. River-faring passengers must pass under some of Washington's ugly, rusting bridges. (The city isn't known for its river crossings.)
Last year, 6,000 people boarded the company's boats during the two-week National Cherry Blossom Festival, and Slaughter is expecting a 20 percent increase, or 1,200 more customers, this year. Other companies offer boat tours as well.
As the recession slashed the traditional corporate charter business in 2008, Slaughter's group began offering walk-up ticket sales. The demand has grown each year.
"We were dead in the water - no pun intended," he said. "But we've gained a different kind of business."
For the 90-minute tour, adult tickets sell for US$24 and children ages 4 to 12 can board for US$12. Boxed lunches and drinks are sold separately aboard the yachts. Visitors can also opt for a "Monuments by Moonlight" cruise.
The group also offers English-style "high tea" brunch cruises aboard an early 20th century yacht on weekends during the festival. They include full table service, china and linens. It's pricer at US$70 for adults and US$35 for children.
The 16-day festival opens Saturday with a ceremony at the National Building Museum and will run through April 11.
The cherry blossom trees were a gift from Japan to the nation's capital in 1912, and each year, the trees are similarly celebrated in Tokyo as they bloom about the same time, marking the annual rite of spring.
The nearly 100-year old gift sparked a tradition that has become big business. Hotels offer special packages, chefs create cherry-inspired creations and museums host special exhibits.
This year, the Smithsonian's Renwick Gallery is presenting the arts and crafts of Japanese Americans held in internment camps during World War II.
The city also features the largest Japanese street festival in the U.S.
A new study by George Mason University found the festival generates about US$126 million in visitor spending each year at numerous attractions.
For visitors who want a closer look at the blossoms, the National Park Service also offers a full range of free activities, including ranger-led Lantern Tours at dusk, talks at the waterside park on Hains Point, a new Family Fun Zone for kids and early morning "chitchat runs" with a park ranger.
Park Service horticulturist Robert DeFeo, who predicts the peak blooming dates for the trees each year, has said at least 20 percent of the blossoms will be open March 28 through April 9. Peak blooming is expected April 1 to April 4 when 70 percent of the blossoms are in bloom.
For Slaughter, the view from the water can't be beat. He tries to pack as many cruises on his schedule as possible when the trees are in full bloom.
"It's an incredibly beautiful city from the river," he said. "You back up a little bit and you see all of Washington and what it really means to Washington. ... People go 'Ahh, this is really something.'"
If You Go
NATIONAL CHERRY BLOSSOM FESTIVAL: March 27 to April 11. Family day and opening ceremony March 27 at the National Building Museum. Annual cherry blossom parade starts at 10 a.m. April 10, then it is followed by the Sakura Matsuri Japanese Street Festival (http://nationalcherryblossomfestival.org).
CAPITAL YACHT CHARTERS: Tours at 12 p.m. and 2 p.m. weekdays and 10 a.m., 12, 2 and 4 p.m. Saturdays and Sundays, Other times also available: http://www.dc-cruises.com
Brett Zongker is an Associated Press writer.