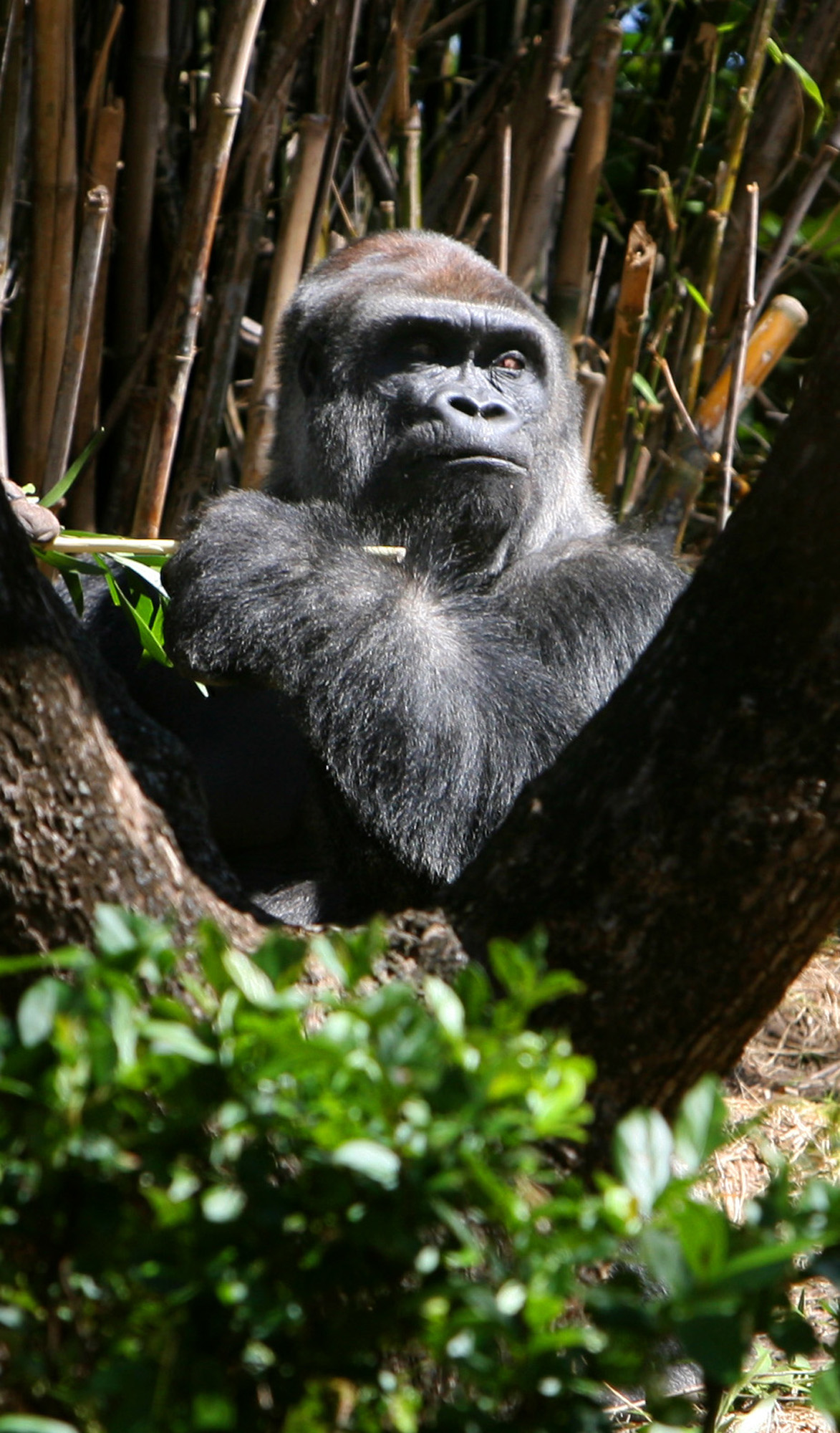 Gino the gorilla knows the drill. He reaches way up with his left hand and puts his right hand out to the side. When his keeper asks, he pushes his right leg out and presses his left thigh and chest against the crisscrossed bars of his enclosure.
He knows that striking this unusual pose - it looks like an upright round of Twister - earns him a treat.
He doesn't know that the ultrasound machine rolled up to the bars will collect information that could help gorillas beyond his Disney's Animal Kingdom home.
The animal-programs team at Walt Disney World began this work late last year and is pioneering the process, which is notable because it uses no sedatives. This allows veterinarians to monitor vital signs of fully awake animals.
"We've seen over the past 20, 30 years that as these big silverbacks get older, they have heart problems," said Dr. Mark Stetter, director of animal health for Disney's Animal Programs.
Gorillas commonly are sedated to get snapshots of their hearts. That disturbs the animals, and it only allows at-rest readings. The result is an incomplete picture of the effects - good or bad - of heart medication.
Now at Animal Kingdom, a sonogramist rolls an ultrasound machine near each gorilla's enclosure - not too close, of course - and a keeper places a probe against the posing gorilla's chest.
"It's a neat combination of fields that may not always overlap," said Kristen Lukas, curator of conservation and science at Cleveland Metroparks Zoo. "This whole notion of fusing training and using that relationship between the keeper and the animal to develop some of these behaviors helps us take better care of the animals."
Each of Disney's eight grown gorillas, which folks may spy along the theme park's Pangani Forest Exploration Trail, have an individualized ultrasound regimen that factors in elements from their temperament to the thickness of their chest.
"You'll see animals in different stances just because they need to orient their chest cavity in order to get the right angle on the probe," said Matt Hohne, animal-operations director at Disney's Animal Kingdom.
A few gorillas learned quickly that the exams had tasty payoffs.
"It's really a give-and-take relationship based on trust with their keepers," Hohne said.
The animals' personalities shine through in the process. Kashata dislikes the cool gel used for sonograms, so keepers warm the gel before applying it to her chest. But when it is boisterous Gino's turn, he takes a swipe of the gel with his fingers and tastes it. He sometimes prefers the unflavored goo to the treat offered from his keeper. During a recent session, Gino was so enamored with the gel-smeared sensor that he attempted to pull it through to his side of the bars.
Keepers reward the gorillas after they assume the proper positions. The animals also respond to specific movements, sounds and commands - as simple as the handlers saying "closer" or tapping a stick.
Once the probe is in place, the sonogram machine records video and still images of the heart. A cardiologist later uses the data to check the organ's walls, effectiveness of ventricles and blood flow.
Results are shared through an Association of Zoos and Aquariums cooperative group - cardiologists, pathologists, curators and veterinarians - that looks at cardiac diseases. Other institutions are trying the no-sedation method but not to the extent that Animal Kingdom has, Hohne said.
'"Our ultimate goal is making sure that every institution with gorillas benefits as well," Hohne said. "It does nothing but benefit the species."
Disney is preparing a video tutorial of its process, including the challenges.
"It's so meaningful that we have a place like Disney that's taking the lead on things, not only doing it themselves but then working to get the information to the other institutions," said Lukas, who also serves as the chairwoman of AZA's Gorilla Species Survival Plan. "It's the future of where zoos are going."
One finding: The sources of humans' heart problems are not the causes of gorillas' heart problems.
"We're certainly seeing that it's age-related; it seems to be mostly in males," Stetter said. "But it doesn't appear to be cholesterol. It doesn't appear to be diet. And it doesn't appear to be the hardening of the arteries."
Now that the Animal Kingdom gorillas are cooperating with the ultrasound procedure, the Disney team is working on another task: low-key blood-pressure checks.
Naturally, there have been challenges, such as convincing the gorillas that they're not being given a new plaything. "How do you get a blood-pressure reading from a gorilla voluntarily without him sort of 'borrowing' that cuff?" Hohne wonders.
Dewayne Bevil is a Orlando Sentinel writer.