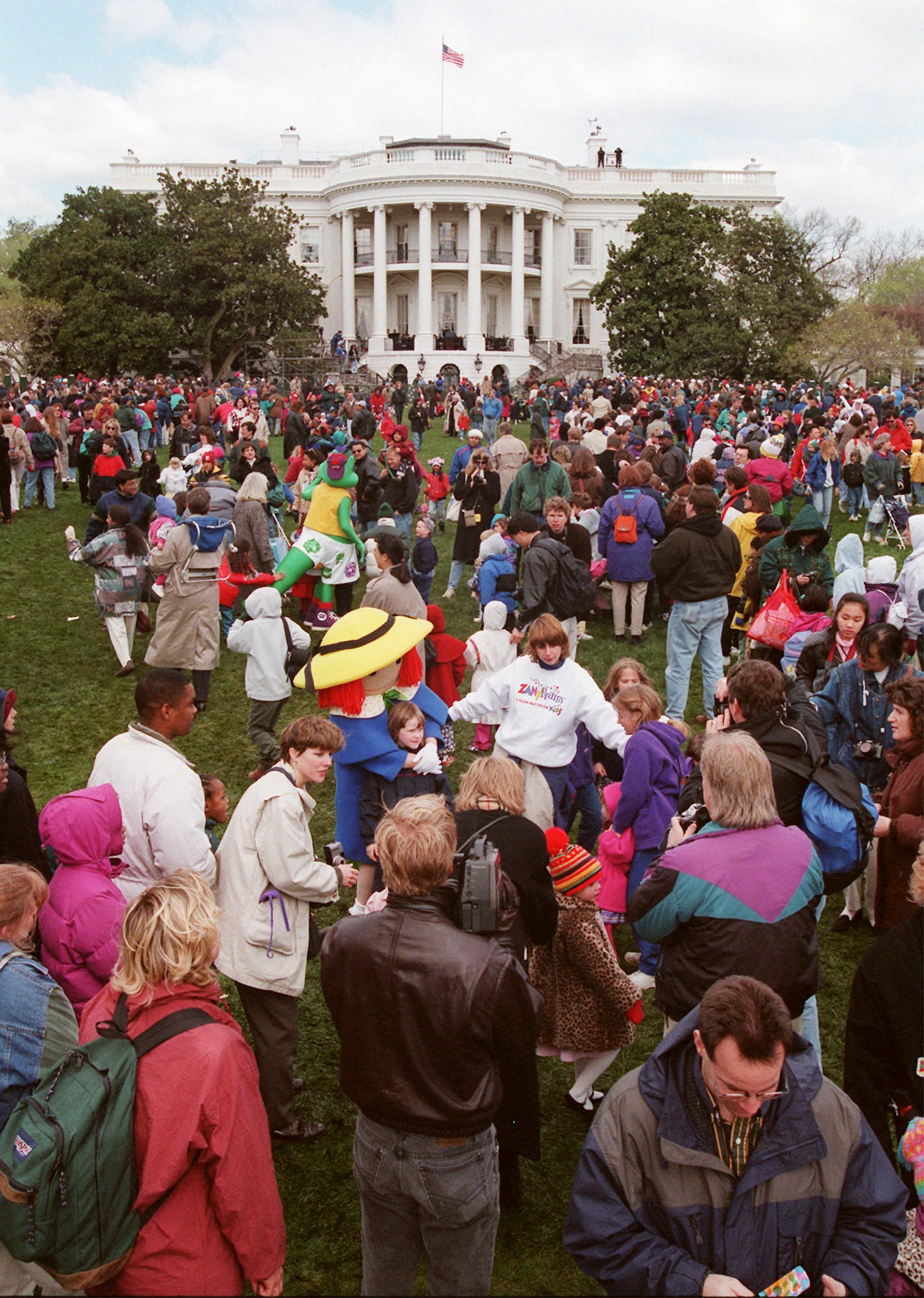 If it's the Monday after Easter in Washington, it's time for the White House Easter Egg Roll.
The White House is getting ready, putting on the finishing touches before the gates open and 30,000 men, women and children scramble to take part in the annual tradition. The Easter Bunny and more than 14,500 hard-boiled eggs are dyed and waiting.
The event, in which children roll eggs using spoons across the White House's manicured lawn dates from 1878. It has a rich history.
Two world wars and weather have caused the "eggcitement" to be canceled several times. The fun and games are at the president's home, but he is not always there to join the fun. The event usually is a signal that spring has arrived in the U.S. capital.
Here are a few tales from White House Easter Egg Roll history.
Rules of game
It is long-standing policy: No child or adult can attend alone. Decades ago, in the 1930s, as the event grew more popular, children and grown-ups alike figured out some "eggceptional" ways around the rule. Children would mingle with tourists and others passing by the White House gates, and hoped they could talk someone into escorting them through security and into the festivities on the South Lawn.
Eager to stroll the plush grounds, adults would dig into their purses and pockets to pay a nickel, a quarter or whatever the going rate was at the time to "adopt" a child long enough to get inside, too.
Once past the guards, they often parted company. Sometimes, the kids headed back out through a different gate in search of another parent for hire and more money for their pockets.
The scam continued to such a degree that one newspaper headline in 1935 screamed: "Children Outside Gates Turn Racketeer and Take Sunday Elders for a Nickel Fee," according to the National Archives. One 11-year-old boy said the five quarters he earned one Easter Monday helped pay the weekly rent for the rooms he lived in with his mother and three siblings. Secret Service agents were posted at the gates in 1939 to break up the racket.
Eggstravaganza
Nowadays, it takes more than just sweet talk to get into the "eggstravaganza." It takes a ticket.
It used to be that on the weekend before the Easter Egg Roll, anyone who wanted tickets had to wait in line outside a booth near the White House, regardless of the weather. Getting a ticket was not guaranteed.
That changed under President Barack Obama and his wife, first lady Michelle Obama.
For the first time last year - the Obamas' first in the White House - tickets were distributed through an online lottery.
The White House said it made the change to give more families from across the country a chance to participate in what is the longest annual presidential tradition on the South Lawn. It also meant people now could apply for tickets from the comfort of their homes.
South Lawn
Public access to the South Lawn is as rare as sightings of the Easter Bunny.
The White House grounds are open to the average public just two weekends a year, for the spring and fall garden tours. It is open again for the Easter Egg Roll, which is the only event where people get to walk across the meticulously tended South Lawn.
It is the White House Easter Egg Roll, but the fun and games did not originate at 1600 Pennsylvania Ave., the presidential address.
The west front of the Capitol has a steep, grassy slope that made it an ideal venue for egg rolling, and children had been taking their colored eggs and rolling them down the hill there for years on Easter Monday.
After putting up with noisy children and watching them trample the grass, members of Congress decided they had had enough. A bill passed and signed by President Ulysses S. Grant in 1876 banned such activity to prevent "injury" to the Capitol grounds and grass.
In 1877, it rained so hard that the egg roll was canceled, so the Capitol Police did not have to enforce the new law.
The officers would have no such luck the following year, however, and had to chase away basket-toting egg rollers as they arrived at the Capitol. "Eggsasperated" egg rollers then headed west on Pennsylvania Avenue in search of an alternate site after word spread for them to go to the White House, according to the White House Historical Association.
As the story goes, President Rutherford B. Hayes was out for his daily walk a few days before Easter in 1878 when a boy approached and asked Hayes if he would let them roll eggs at the White House. The still-new president was not familiar with the tradition, partly because the event was rained out his first year in office, in 1877. Hayes told the boy he would check with his staff. Back at the White House, the president inquired about egg rolling. He instructed the staff to let the kids through the gates if they showed up on Easter Monday, and not to make a fuss.
When Monday arrived, the egg rollers did, too. The next year, on the eve of Easter in 1879, another boy approached Hayes as he was walking to ask about egg rolling at the White House. Hayes replied that he thought there would be no objection to it. By 1880, no child bothered to check beforehand with Hayes. Egg rollers showed up and took over the south grounds of the White House. The tradition of a White House Easter Egg Roll was well under way.
On the Net:
White House:
www.whitehouse.gov/eastereggroll
National Archives:
tinyurl.com/y86p8qt
White House Historical Association:
tinyurl.com/yaequwm