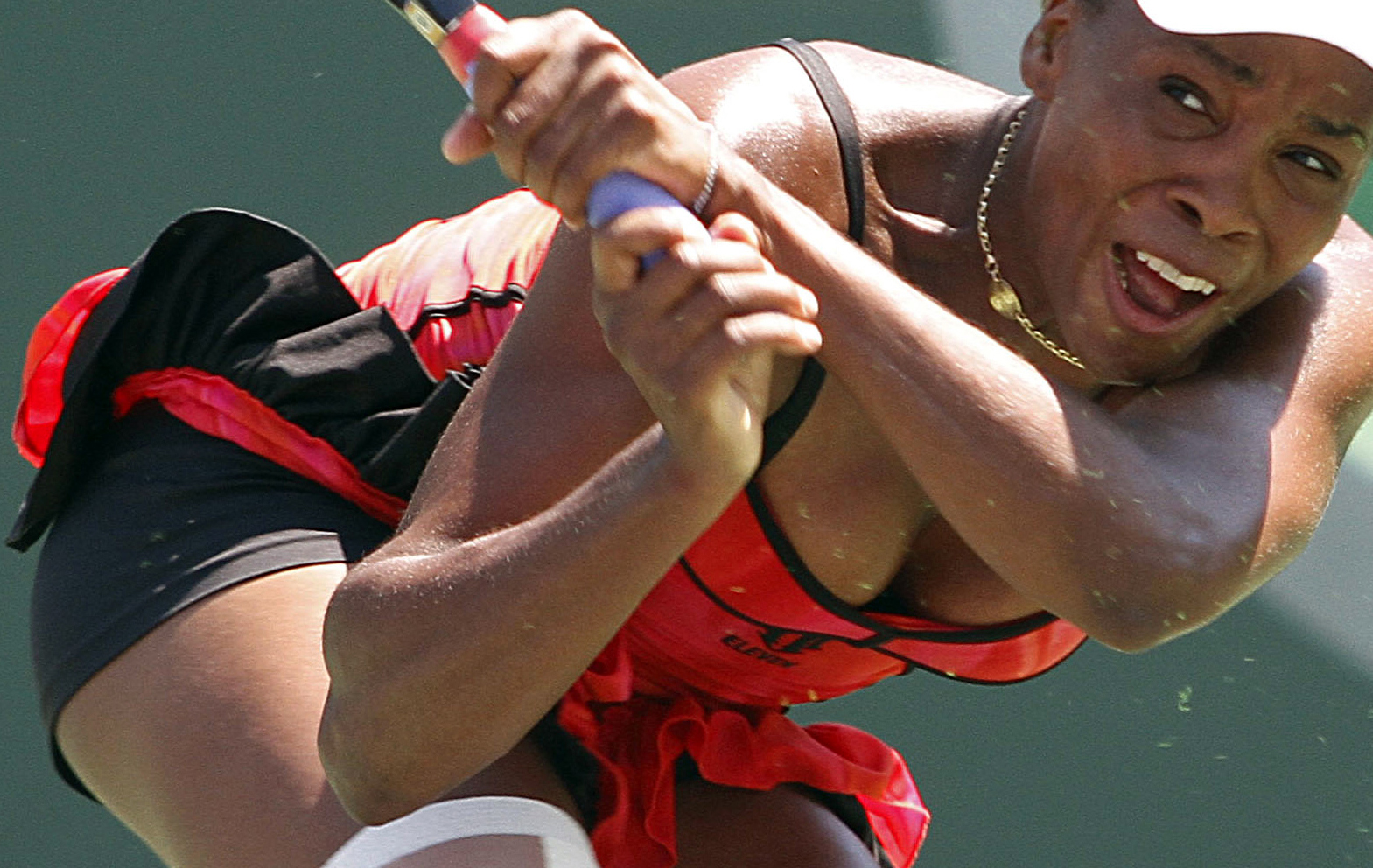 Venus Williams swept past France's Marion Bartoli Thursday to reach the final of the Sony Ericsson Open, where she'll face old rival Kim Clijsters of Belgium.
Williams downed Bartoli 6-3, 6-4, notching her 15th straight victory in her current hot streak.
Clijsters, the 2005 Miami champion, needed four match points to put away fellow Belgian Justine Henin 6-2, 6-7 (3/7), 7-6 (8/6).
The battle was the second this year between two players who have come out of retirement. Clijsters returned with a bang last year to win the US Open, while Henin, who launched her comeback this year, reached the Australian Open final.
Between them Clijsters and Henin produced 18 double faults and 103 unforced errors.
But the end of the match saw some exciting exchanges, Clijsters sealing the victory with a volley winner followed by a line-skimming forehand.
Clijsters had appeared to be on the way to victory after taking the first st and building a 3-0 lead in the second.
She was one point away from taking a 5-2 lead, but couldn't shake off the determined Henin.
"It wasn't a great match, and she played better on the important points," Henin said. "She's been more aggressive and took the opportunities. I think that really made the difference today."
In the men's quarter-finals, Roland Garros runner-up Robin Soderling and giant-killer Tomas Berdych lined up a semi-final showdown.
Soderling, the fifth-seeded Swede, broke Russian Mikhail Youzhny six times in a 6-1, 6-4 victory, dropping only five points on his first serve.
Soderling reached his second straight Masters 1000 semi-final, following up on his trip to the final four at Indian Wells where lost to American Andy Roddick.
"I played really well from the back of the court," Soderling said. ""I was moving well and didn't miss much. But I didn't serve quite the way I wanted to. I served really well the past three matches here, but today it wasn't so good. Hopefully I can improve on that tomorrow."
In Berdych he'll meet a player who managed to build on the momentum of his fourth-round upset of world number one Roger Federer.
Berdych rallied for a gritty 4-6, 7-6 (7/5), 6-4 victory over Spain's Fernando Verdasco.
The match, lasting nearly three hours, was a contrast to their clash at Indian Wells, where Berdych made short work of Verdasco.
"It was a great match, definitely," Berdych said of a contest in which each player saved seven of nine break points faced. The Czech won just one more point than Verdasco.
Berdych admitted his marathon win over Federer had left him with a bit of a hangover - that he was able to shake off in time.
"The beginning for me was a little bit slow, because I was still feeling a little bit tired after the long, long match against Roger," he said.
"But then finally I get the rhythm, start to play really well. I think the beginning of the third set Fernando was a little bit struggling. He was maybe a little bit tired. But that was my advantage."
Soderling said he was looking forward to the clash with Berdych.
"We always had good matches," he said. "He's a great player. He played really well now in the past couple of weeks. He's definitely in good form. I really have to play well."
The other men's semi-final has already been set, between world number four Rafael Nadal and Roddick.