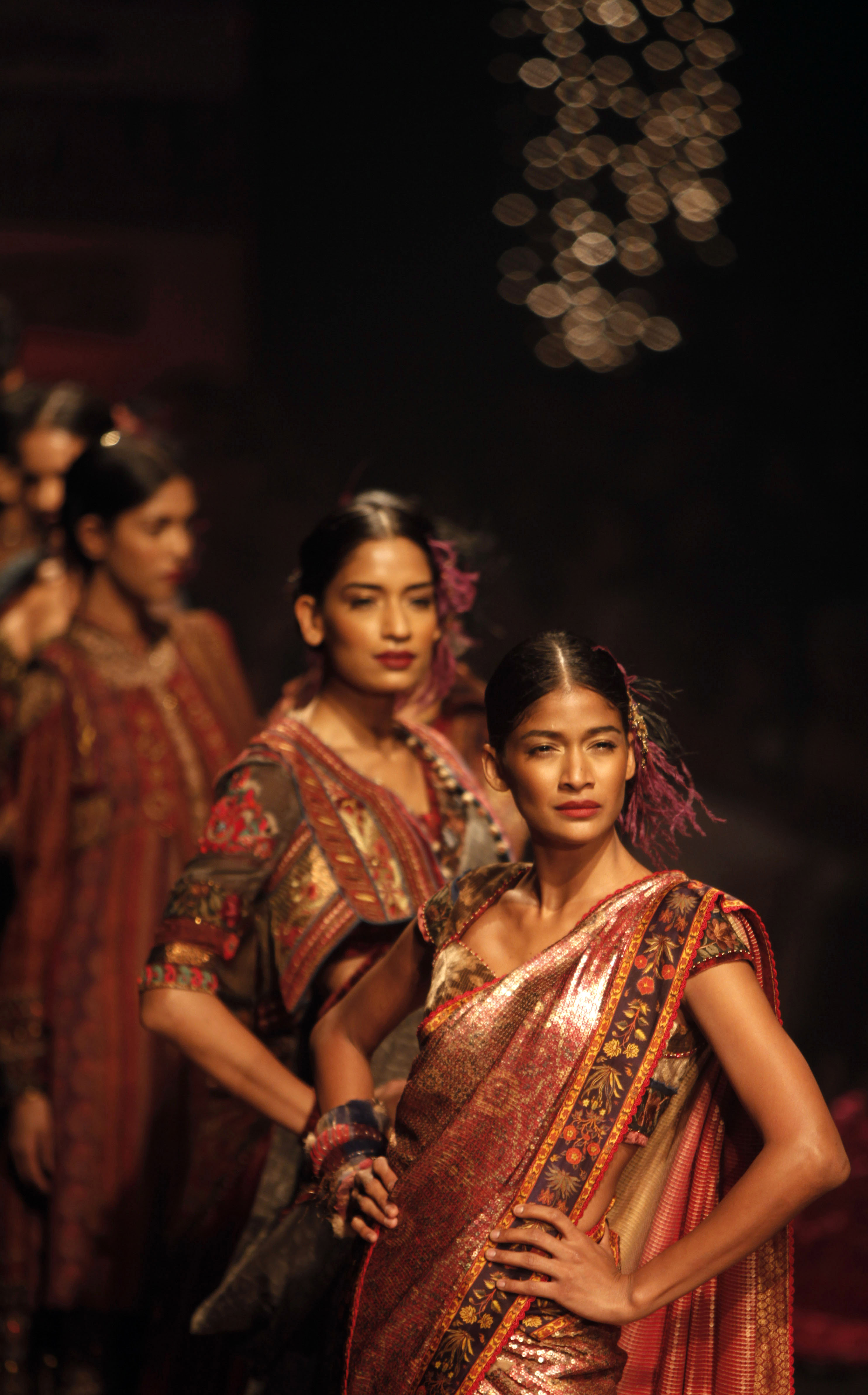 Raw silk, cotton, jute - India's traditional fabrics are finding favour among top designers raring to break new ground in the highly competitive Indian fashion market.
The tendency to ape Western cuts and style in recent years has seen the country's own rich craftsmanship take a backseat.
But a reversal in the trend was evident at this year's Wills India Fashion Week, where classic couturier Tarun Tahiliani marked the return to traditional craft with hand-made Indian fabrics and embroidery in his signature draping style.
"I consciously used Indian fabric. I feel we've been a little too Western," Tahiliani said after his show at the event, one of the two most prestigious events on the Indian fashion calendar.
Tahiliani's theme at the show was "Return to The Craft" highlighting qualities that he said had been lost in the "hyper-explosion of brands, stores, distribution and price wars."
In keeping with his theme, the designer showcased gilets (sleeveless jackets) over tiny T-shirts, sarongs and his trademark sari drapes held together by embroidered belts.
Tahiliani, whose previous shows had a more international flavour, is not alone in his new-found mission.
A host of upcoming and promising designers are looking to affirm their cultural heritage and break free from the Western mould to carve out "Indian" identities.
Samant Chauhan, from the impoverished eastern state of Bihar, is trying to revive the handloom industry by focusing on raw silk and making it appealing to the global market.
Another example is designer Nitin Bal Chauhan, who gave up a scholarship offer to study fashion abroad and went back to his village in northern Himachal Pradesh, where the skills of local craftsmen were dying.
"I have been promoting raw silk and using it a lot in texturing, interlacing and knits to create layered outfits," said Samant Chauhan. "The silk I use has been hand-woven and made from an eco-friendly process without the use of any dyes.
"I have been working on raw silk ever since I was in college because I could see that the craftsmen, in spite of being so talented, were not getting their due. So I decided to do something about it through my work."
Samant Chauhan said designers need not look westwards for inspiration as India has a rich history of craftsmanship.
"Our designs are so intricate and rich that international designers can never match us. We must take our traditional craftsmanship forward and present it in a way that it is liked in the international market," he said.
Tahiliani, whose elaborate golden bridal outfit for Bollywood celebrity Shilpa Shetty was a hit among wealthy socialites, said most designers resisted working with handloom materials because they do not "construct too well."
"It is beautiful to wear as a sari or as a dupatta (stole), but if you want to make different clothes with it, you can't. You can't have perfect fits with handloom as it doesn't mould like the fabrics you get abroad.