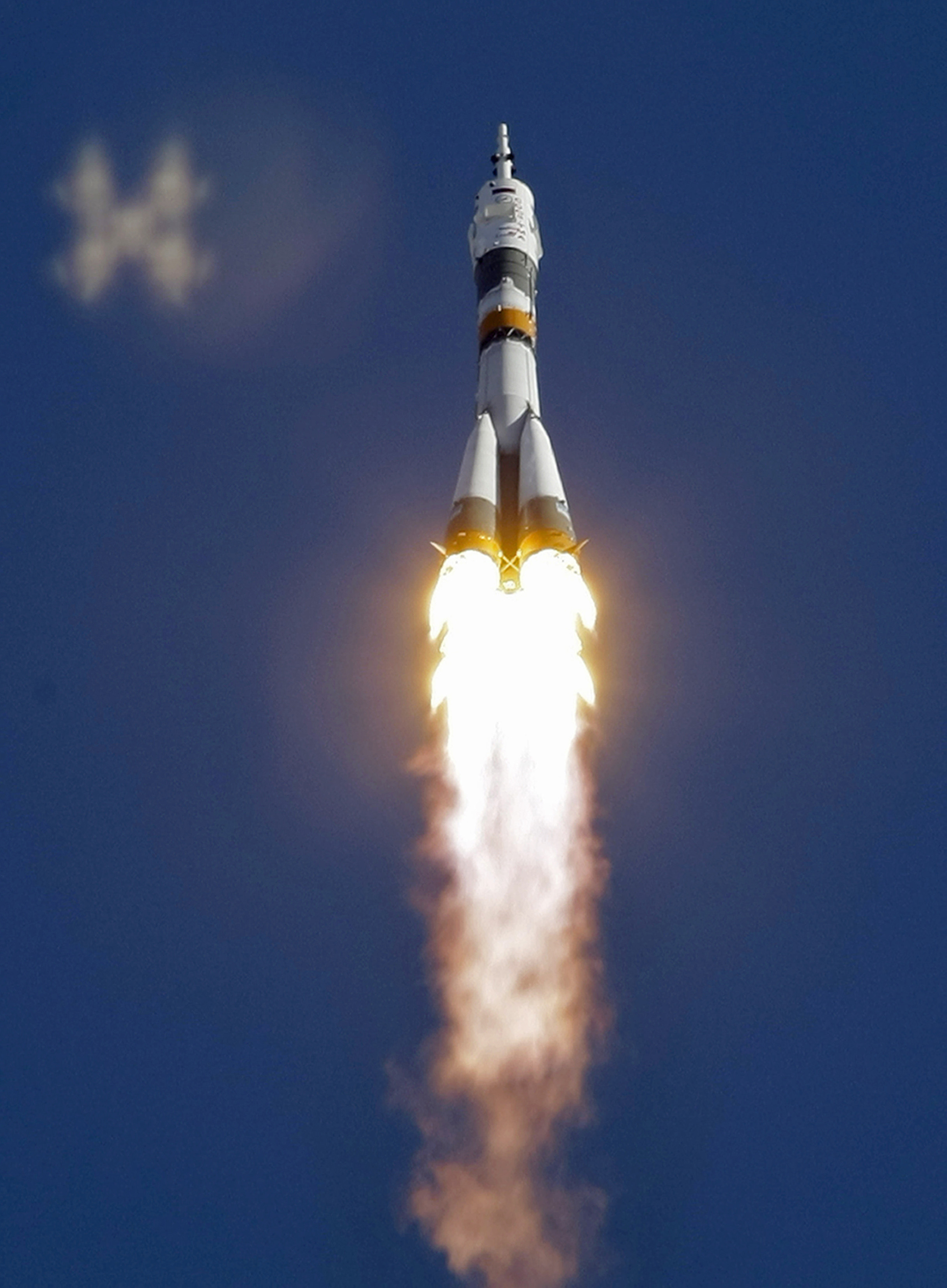 The International Space Station is set for some heavy traffic over the coming days in a tightly packed schedule that kicked off yesterday when a Russian rocket transporting three astronauts blasted off from a space center in southern Kazakhstan.
The Soyuz craft carrying California native Tracy Caldwell Dyson and Russians Alexander Skvortsov and Mikhail Kornienko soared from the Baikonur cosmodrome in southern Kazakhstan in a carefully regimented operation that has been perfected over the decades.
At the scheduled time of 10:04 a.m. (0404 GMT), powerful booster rockets shattered the stillness of the immense and arid Kazakh steppe, propelling the Soyuz heavenward atop an iridescent flow of flames against the limpid blue sky.
The craft, which thundered into orbit at more than 8,000 miles per hour (13,000km per hour) about 10 minutes into the flight, will dock on Easter Sunday with the space station, orbiting about 200 miles (320km) above the Earth.
Live pictures broadcast from the craft showed expedition chief Skvortsov smiling as a toy duck nicknamed "Quack" dangled overhead. Once the craft entered orbit, the fluffy talisman began to float, demonstrating zero gravity. "The vehicle is performing fine," Skvortsov was heard saying after a long communications disruption due to static. Caldwell Dyson didn't respond to questions from Russian mission control in Moscow asking how she was, apparently due to radio interference. Before the pre-launch briefing early yesterday, Caldwell Dyson - a lead vocalist in Houston-based all-astronaut rock band Max-Q - drew on her musical talents by regaling her friends, colleagues and relatives with a solo rendition of Garth Brooks' country hit "The River."
Caldwell Dyson, Skvortsov and Kornienko will join the Russian commander Oleg Kotov, NASA astronaut Timothy J. Creamer and Soichi Noguchi of Japan on board the space station.
Within three days of their arrival, a seven-person crew aboard the Shuttle Discovery will dock at the station for a 13-day mission to transfer eight tons of research equipment and cargo. In a historic development, that period will mark the first time that four women have been in space contemporaneously.
The expedition led by Skvortsov, a seasoned military pilot who is making his maiden flight to space, will end in September, just as the U.S.' last-ever shuttle flight launches from the Kennedy Space Center.