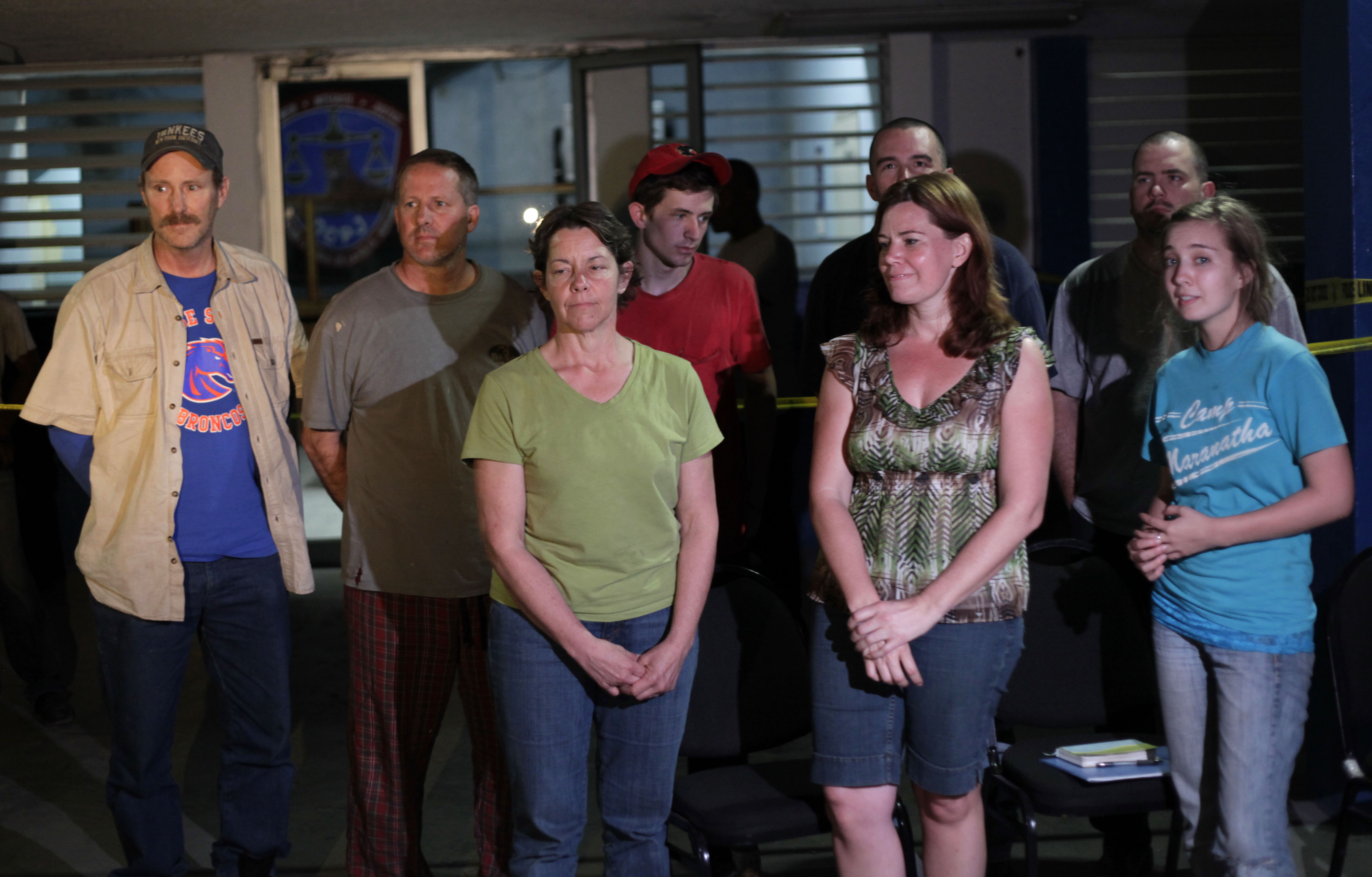 A group of 10 American Baptists were being held in the Haitian capital yesterday after trying take 33 children out of Haiti.
The church group, most of them from Idaho, allegedly lacked the proper documents when they were arrested Friday night in a bus along with children from 2 months to 12 years old who had survived the catastrophic earthquake.
The group say they were setting up an orphanage across the border in the Dominican Republic.
"In this chaos the government is in right now we were just trying to do the right thing," the group's spokeswoman, Laura Silsby, told The Associated Press at the judicial police headquarters in the capital, where the Americans were being held pending a hearing today before a judge.
The Baptists' "Haitian Orphan Rescue Mission" was described as an effort to save abandoned, traumatized children.
Their plan was to scoop up 100 kids and take them by bus to a 45-room hotel at Cabarete, a beach resort in the Dominican Republic, that they were converting into an orphanage, Silsby told the reporter.
Whether they realized it or not, these Americans _ the first known to be taken into custody since the Jan. 12 quake _ put themselves in the middle of a firestorm in Haiti, where government leaders have suspended adoptions amid fears that parentless or lost children are more vulnerable than ever to child trafficking.
Silsby said the group, including members from Texas and Kansas, only had the best of intentions and paid no money for the children, whom she said they obtained from well-known Haitian pastor Jean Sanbil of the Sharing Jesus Ministries.
Silsby, 40, of Boise, Idaho, was asked if she didn't consider it naive to cross the border without adoption papers at a time when Haitians are so concerned about child trafficking. "By no means are we any part of that. That's exactly what we are trying to combat," she said.
She said she hadn't been following news reports while in Haiti.
Social Affairs Minister Yves Cristallin told the the reporter that the Americans were suspected of taking part in an illegal adoption scheme.
Cristallin said the 33 children were lodged late Saturday at an SOS Children's Village outside of Port-au-Prince. SOS Children's Villages is a global nonprofit based in Austria.
Many children in Haitian orphanages aren't actually orphans but have been abandoned by family who cannot afford to care for them.
Advocates both here and abroad caution that with so many people unaccounted for, adoptions should not go forward until it can be determined that the children have no relatives who can raise them.
UNICEF and other NGOs have been registering children who may have been separated from their parents. Relief workers are locating children at camps housing the homeless around the capital and are placing them in temporary shelters while they try to locate their parents or a more permanent home.
The U.S. Embassy in Haiti sent consular officials, who met with the detained Americans and gave them bug spray and field rations, according to Sean Lankford of Meridian, Idaho, whose wife and 18-year-old daughter were being held.
"They have to go in front of a judge (today)," Lankford told the the reporter.