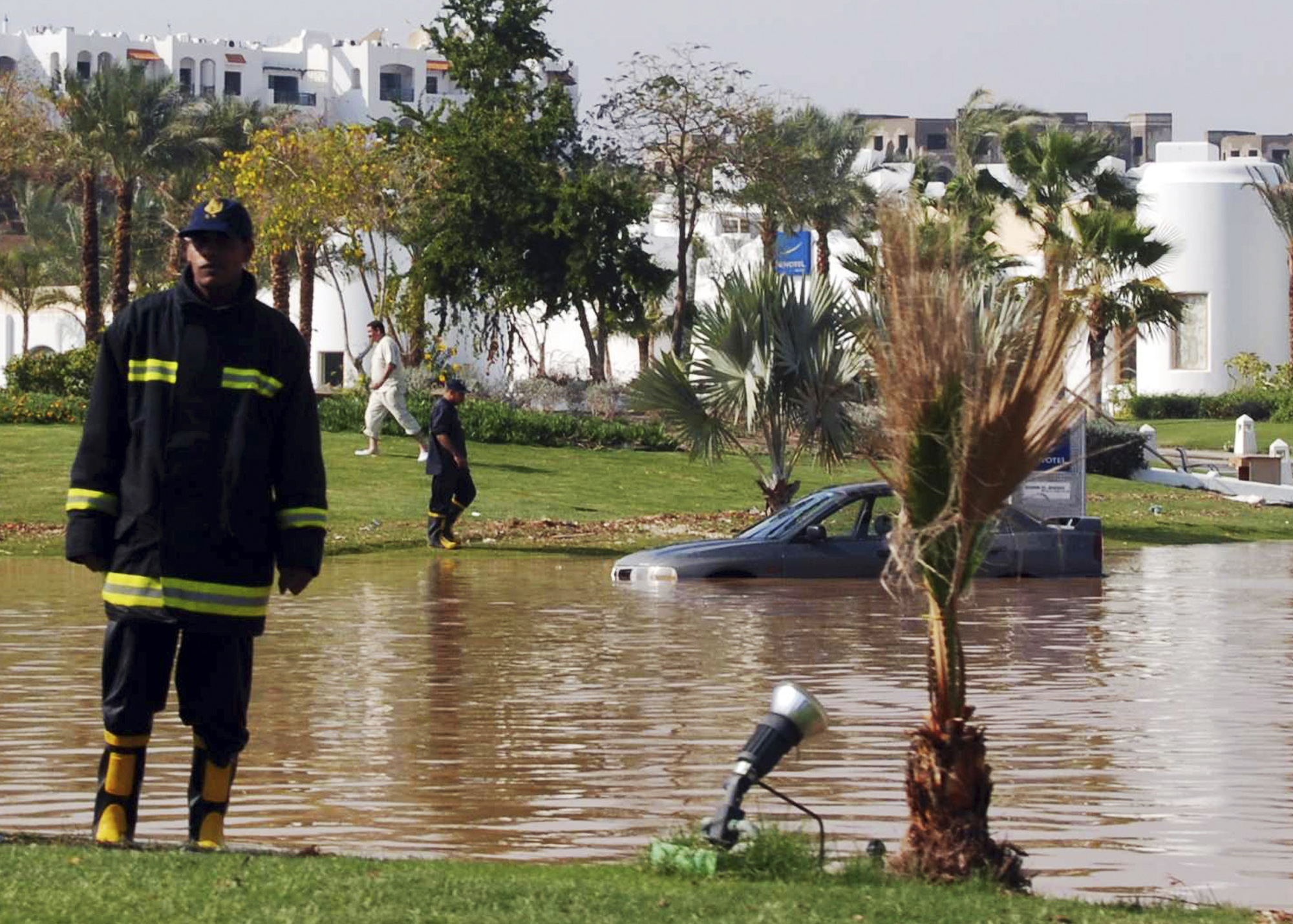 The Nile Delta, Egypt's bread basket since antiquity, is being turned into a salty wasteland by rising seawaters, forcing some farmers off their lands and others to import sand in a desperate bid to turn back the tide.
Experts warn that global warming will have a major impact in the delta on agriculture resources, tourism and human migration besides shaking the region's fragile ecosystems.
Over the last century, the Mediterranean Sea, which fronts the coast of the Nile Delta, has risen by 20cm and saltwater intrusion has created a major challenge, experts say.
A recent government study on the coast of Alexandria, Egypt's second largest city, expects the sea to continue to rise and flood large swathes of land.
"A 30 centimeter rise in sea level is expected to occur by 2025, flooding approximately 200km2.
"As a result, over half a million inhabitants may be displaced and approximately 70,000 jobs could be lost," the study said.
Environmental damage to the Nile Delta is not yet one of Egypt's priorities, but experts say if the situation continues to deteriorate, it will trigger massive food shortages which could turn seven million people into "climate refugees" by the end of the century.
The fertile Nile Delta provides around a third of the crops for Egypt's population of 80 million and a large part of these crops are exported providing the country with an important source of revenue.
Climatic changes have forced some Delta farmers to abandon their land, while others are trying to adapt by covering their land with beds of sand to isolate it against seawater infiltrations, and grow crops.
"We buy these sacks of sand which cost a lot of money and use them to make a bed on which to grow crops so we can get by," said farmer ElSayed Saad.
"Life is difficult," said Saad, who like other farmers must repeat the procedure every 10 years in order to stay productive - even if that in itself is not a guarantee.
Meanwhile engineering firms specialising in underwater projects have been looking for more long-term solutions.
Mamduh Hamza, of Hamza Associates, has floated a plan to build a waterproof wall or barrier that would effectively separate the sea from the land and raise the shore by 2m.
"The wall will prevent flooding as well as underground infiltration," Hamza told reporter.
The project was submitted to the authorities in 2007 but has not yet been given the go-ahead, amid fears that such a wall would undermine Egypt's Mediterranean beach resorts which are popular tourist destinations.
Some say that Egypt, like many other developing countries, is suffering from the mistakes of the industrialised West.
"Egypt is only responsible for 0.6 percent of global greenhouse gas emissions," said Mohammed al-Raey of the Regional Disaster Response center.
Raey and other experts believe that rising sea levels will not only risk inundating the fertile Nile Delta region but will also change the quality of water, as saltwater seeps into the groundwater.
"There is no doubt that (climate change) poses a threat to food security and a threat to social systems," Raey said.
People in affected areas will leave to find work elsewhere, this in turn will cause unemployment in other areas to rise, which leads to crime and threatens general security.
"So we consider this a matter of national security," said Raey who believes farming in the Delta needs to be restructured to confront the effects of climate change.
"For example, if there are areas that will be flooded, we should use them for fish farms. If there are areas that must be protected, we should protect them with walls," he said.
Egypt's Environmental Affairs Agency also believes that rising sea levels will have an impact on agricultural productivity and fisheries "thus influencing the country's food supply."
The complex ecosystem of the Nile, which has nurtured civilisations for millennia, has already been deeply affected in the last 60 years by the construction of the High Dam in the southern city of Aswan.
The giant project managed to regulate the often devastating effect of the Nile's yearly floods, but it also deprived lands of crucial nutrients and minerals.