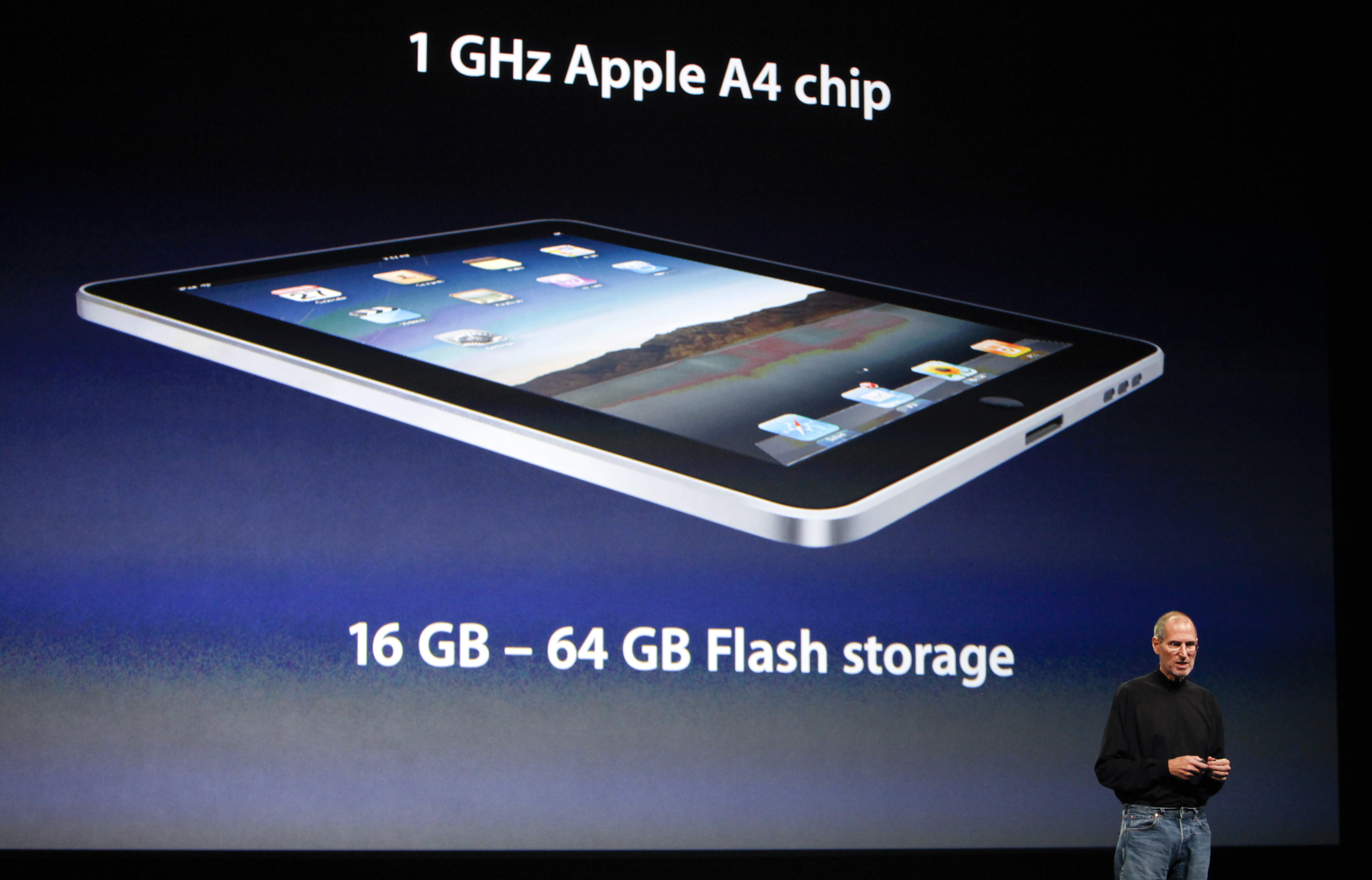 With all due respect to Steve Jobs, he chose the wrong name for Apple Inc.'s new iPad.
A far better name would be iWonder. As in, it certainly is a consumer-tech wonder. And also as in, I wonder if the content providers who may determine its success are prepared to take full advantage of it?
The half-hour or so I spent playing with the iPad at its San Francisco unveiling on Wednesday was much too short a time to evaluate it authoritatively. What I can say is that it's fast, beautiful and loaded with potential.
The half-inch-thin iPad looks something like an iPod Touch on steroids. While it uses the iPhone/iPod Touch operating system - meaning it runs just about all the 140,000 or so applications already written for those pocket-sized devices - you can sense a little Mac DNA as well in the machined aluminum back. It feels solid and substantial in your hand - and also, at about a pound and a half, is considerably heavier than a typical e-book reader, one of its core functions.
Indeed, the iPad is about consumption of media in all its forms, from storing and viewing your photos to watching high-definition movies on the beautiful 9.7-inch touch screen.
I was struck by its speed and responsiveness. In the photo application, for instance, I could race through hundreds of photos in a blur. Apps originally written for the iPhone, such as Electronic Arts Inc.'s car-racing game Need for Speed Shift, looked terrific when expanded to fit the iPad screen. They may look better still once developers begin writing specifically to the new dimensions and the capabilities of the custom Apple-designed chip that powers the unit.
Turning the Page
Books in the new iBooks application look much more paper-like than they do on devices such as Amazon.com Inc.'s Kindle or Barnes & Noble Inc.'s Nook. The process of turning a page is so smoothly animated that if you stop in the middle of the process, you see both the content of the page being turned and that of the new page peeking out from underneath, just as if you were holding a physical book.
While Apple is hardly known for the value pricing of its products, the iPad may be the exception. It will be available in six models, with the least expensive - including 16 gigabytes of flash-memory storage and Wi-Fi connectivity - starting at just US$499. It and two other Wi-Fi models with more memory go on sale in March.
3G Connectivity
A month later, three more iPads will go on sale, adding connectivity over AT&T Inc.'s 3G wireless network in the U.S. The top-of-the-line model, with both 3G and 64 GB storage, will cost US$829. AT&T will offer no-contract data plans costing US$14.99 for up to 250 megabytes per month, or US$29.99 for an all-you-can-eat plan.
At those prices, and if the iPad also fulfills Jobs's battery-life promises - 10 hours of heavy-duty use, and even longer for lower-impact functions like listening to music - Apple will have delivered a true achievement. Then the question will be whether the publishing industry, which up to now hasn't been known for forward thinking, will do the same.
Will book publishers, for example, get to work producing added-value interactive versions that include author interviews and DVD-style extras to take advantage of the iPad's multimedia capabilities? Or will they be content to use Apple's new iBooks store to sell the same plain-vanilla e-books they currently produce, in hopes of simply lessening their dependence on Amazon.com?
Life Preserver
What about newspaper and magazine publishers? These, after all, are the same geniuses who decided to give away their product for free, then expressed shock when their audiences ended up valuing it no more highly than they did. Will they now recognize the life preserver Apple has thrown them and produce versions optimized for the new platform, with features that will excite their customers and re-engage their advertisers?
To a larger extent than with most of Apple's other products, the iPad's fate is out of the company's hands. Without compelling new content, it risks having no reason to be.
If that's the case, it may turn out that Apple's decision to bring iWork, its Mac productivity suite, to the iPad will be crucial. The three iWork programs - a word processor, spreadsheet and presentation software - will sell for US$9.99 each. With them and a Bluetooth keyboard, or perhaps the new combination keyboard-dock that Apple showed off this week, the iPad becomes a sophisticated alternative to inexpensive netbook computers running Microsoft Corp.'s Windows software.
While that might still sell a fair number of iPads, it would signal failure in the ambitious goals Jobs has set out for the device. To be truly "revolutionary," which was the word he used to describe it, the iPad needs content as cool as it is.