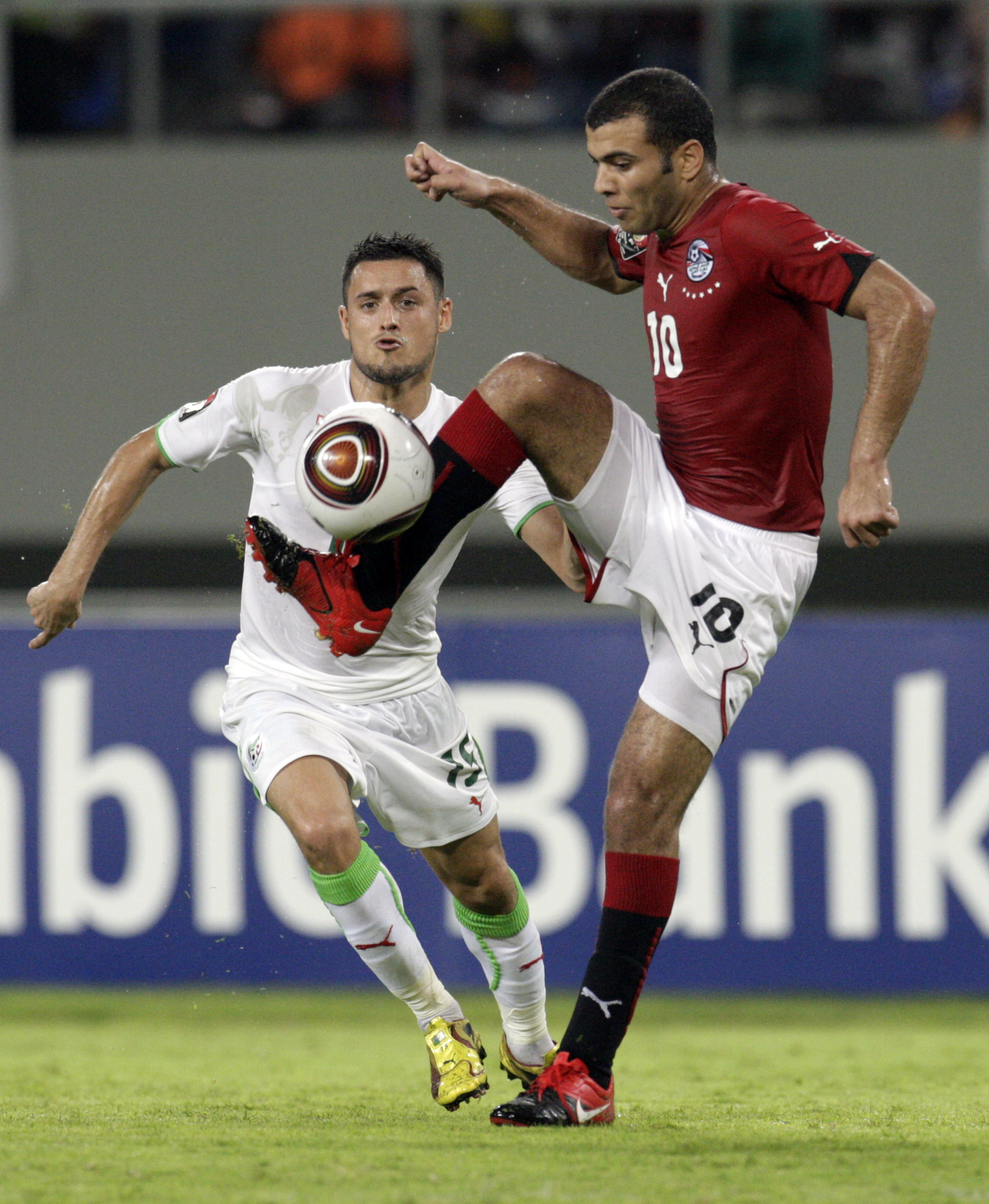 Defending champions Egypt thrashed bitter rivals Algeria 4-0 to reach the Africa Cup of Nations final on Thursday and stay on course for an unprecedented seventh title.
In a stormy semi-final clash, Algeria ended the game with just eight players as Egypt avenged their painful World Cup qualifying defeat against their North African rivals last November.
Victory also extended Egypt's unbeaten run in the championship to 18 games.
On Sunday, the Pharaohs will on Ghana, who pipped Nigeria 1-0 in the other semi-final.
Egypt took the lead in the 39th minute through a penalty by Hosni Abdrabou after Emad Motaeb was brought down by Rafik Halliche inside the box.
The big Algeria defender saw red for his second booking of the night.
Mohamed Zidan extended Egypt's lead in the 65th minute when he let fly from 15 meters beyond a diving goalkeeper Faouzi Chaouchi.
Soon after Nadir Belhadj became the second Algerian player to be sent off after a vicious two-footed tackle on Ahmed Al-Muhammadi.
Substitute Mohamed Abdel Shafi put the game beyond the Desert Foxes of Algeria on 81 minutes when he found the back of the net from a very tight angle on the left.
Algeria's woes were compounded in the 86th minute when goalkeeper Chaouchi was also sent off after he launched a wild kick at a goal-bound Mohamed 'Gedo' Nagy.
Supersub Nagy made it 4-0 in stoppage when he slammed the ball past replacement goalkeeper Lamine Zemmamouche.
Egypt assistant coach, Shawki Gharib, said they deserved to reach their third consecutive Nations Cup final.
"We are a great team and deserved to be in the final again because we defeated three World Cup finalists (Nigeria, Ivory Coast and Algeria) to get there. We also scored 10 goals in three matches," he said.
Gharib dismissed suggestions that Benin referee Koffi Codjia decided the outcome of this much-anticipated clash.
"Refereeing mistakes are part of the game and it is because of these mistakes that we are not going to the World Cup. We have suffered from mistakes by referees in the past," he argued.
However, Algeria coach, Rabah Saadane, blasted the referee's performance.
"The referee decided the outcome. There was a plan against us when he gave our best defender (Rafik Halliche) a red card for what was not a penalty," said Saadane.
"And when we had to play with three men down, it was impossible to come back against a team like Egypt, who play the ball around very well."
Saadane added he was consoled by the fact that his team improved as they progressed in the tournament and this experience will stand them in good stead at the World Cup in June.
"This is a young team. Experience here will prepare us very well for the World Cup," he said.
After a rather cautious first half, Algeria tried to come out of their defensive shell and attack Egypt.
Belhadj now began to attack from the left but it was Egypt who came close to doubling their first-half lead when Sayed Moawad got to the end of a loose ball, raced into the box only to be denied by a timely tackle by an Algerian defender.
On the hour mark, Essam El-Hadary pulled off a splendid save off Mourad Meghni, whose free kick was heading into the top corner before the veteran goalkeeper stretched full length to push it away for a corner.
Egypt's response was quick as three minutes later, several players including Ahmed Hassan, failed to connect home from inside the 18-yard box, before Zidan broke his goal scoring duck at this tournament with a superb effort from just inside the box.
In the 76th minute skipper Ahmed Hassan would have got his name on the scoresheet in his 171st international, but his shot from inside the box missed its target with the Algerian goal at his mercy.