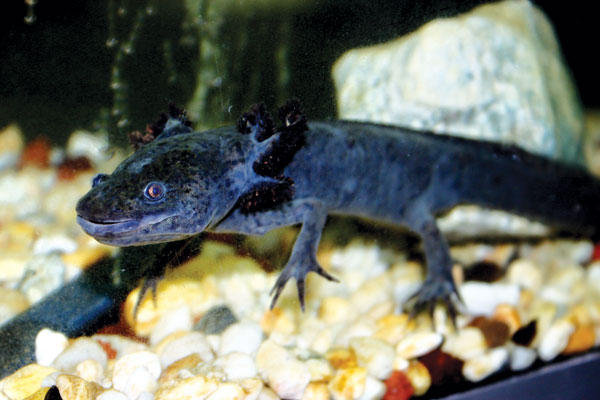 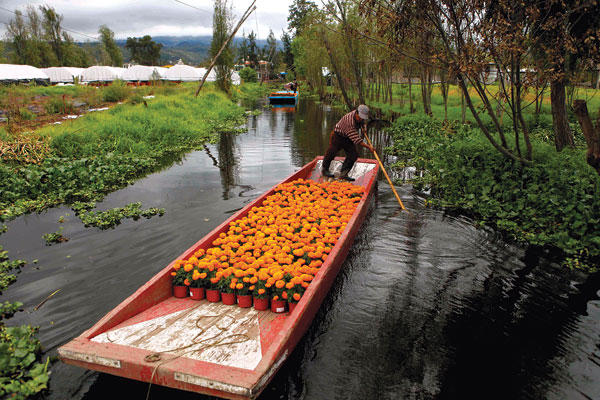 The ancient waterways upon which the Aztec Empire was built are now a fraction of their former glory. Sucked dry by Spanish conquerors and subsequent urban planners, Mexico City's great lake is now little more than a network of canals in Xochimilco, a borough in the city's far south.
Hidden underneath the murky water, sharing space with discarded soda cans and empty potato-chip bags, an ageless "water monster" called the axolotl, a central figure in Aztec legend and a protein-rich part of the diet then, is also vanishing.
The creature is a type of salamander boasting a tuft of featherlike gills on its head and a "smile" that makes it seem more like a stuffed animal than a slimy amphibian.
The axolotl is found naturally only in this tangle of canals and channels, but urban growth, pollution, and the introduction of predatory fish have taken a heavy toll: The salamander population has shrunk 10-fold in the past five years alone. Today, scientists estimate that, at best, only some 1,200 are left.
Now a team of biologists in Mexico City is trying to save the axolotl (pronounced AK suh lot'l) from extinction. It's not just a matter of preserving an icon of the past: In laboratories around the world, axolotls are studied for their potential to aid war victims and others who have lost limbs, because they have the ability to regenerate lost or damaged body parts.
"It's not a panda in terms of cuteness," concedes Luis Zambrano, the lead biologist overseeing a bustling lab of students at the National Autonomous University of Mexico, who are monitoring the axolotl population in Lake Xochimilco. "But for historic, cultural, gastronomical, biological, and medical interests, they are, by far, more important than a panda."
At first glance, Xochimilco seems little more than a tourist trap, a Mexican version of Venice. Colorful gondolas called trajineras hold Mexican families lunching on tacos and mariachi ensembles looking for a buck.
Yet beyond the tourist route, narrow canals where marshland is accessible only by canoe and where trees form canopies across the waterways, Dr. Zambrano and his team are rebuilding channels to restore axolotl communities in the wild.
It seems a race against time. The International Union for Conservation of Nature has classified the axolotl as a threatened species. Zambrano's research suggests it could disappear in coming years if nothing is done.
On a recent day, a group of students measured the growth of salamanders that have been living in a refuge at the edge of a farmer's property, surrounded by irises that act as a natural filter and within nets to fight off the tilapia and carp that were introduced into the waters more than two decades ago and now feed on axolotl eggs whenever they can find them.
Initially, the scientists expected to breed the animals in labs and reintroduce them into the water. But Zambrano says that would reduce genetic variability and increase risks of chytrid fungus, which causes a disease that has been killing amphibians worldwide. Instead, they are breeding them in their natural habitat, creating five experimental channels now, with more channels planned.
Success depends on the full support of the locals, says Elsa Valiente, who leads the axolotl project on the banks of Lake Xochimilco, where some 1,000 farmers and 200 fishermen are registered to fish. "It cannot work without their commitment," she says.
Getting locals and biologists on the same page is not always an easy task. When students here think of an axolotl, they think of science. Locals say they think about a favorite lunch of the past - axolotl tamales, served whole in cornmeal and covered with corn leaves.
But a handful of area farmers who grow spinach and cilantro on plots of land called chinampas talk proudly of the salamander's role in the great legends of their history: The Aztec god Xolotl is believed to have turned into an axolotl while fleeing his enemies. "I don't want to lose this part of our culture," says Anastasio Santana, on whose land the biologists built their first experimental channel.
Farmers are reaping indirect benefits from the world's interest in their ancient creature. If the project is going to succeed, ecological degradation, from uncontrolled population growth and Xochimilco's role as a receptacle for wastewater from nearby treatment plants, must be reversed.
So the project includes a series of conservation training. It has also purchased a compost machine to give farmers and fishermen an alternative source of income and supported their efforts to sell their herbs and vegetables citywide as a "locally grown" option for urbanites.
The project also seeks to resume work with the municipality to help remove the tilapia and carp that nibble at the edges of the chinampas.
Those aren't the only goals, though. Local farmer Dionizio Eslava, who heads a producer's association in Lake Xochimilco, sees the project as a parallel effort to re-create ancient life on the floating gardens of Xochimilco, where many today have opted to grow more lucrative flowers in greenhouses instead of food.
His group wants to work with farmers to get rid of pesticides, create compost, and reforest stretches of land. "We cannot preserve only our biodiversity," Mr. Eslava says, "but our culture, too."