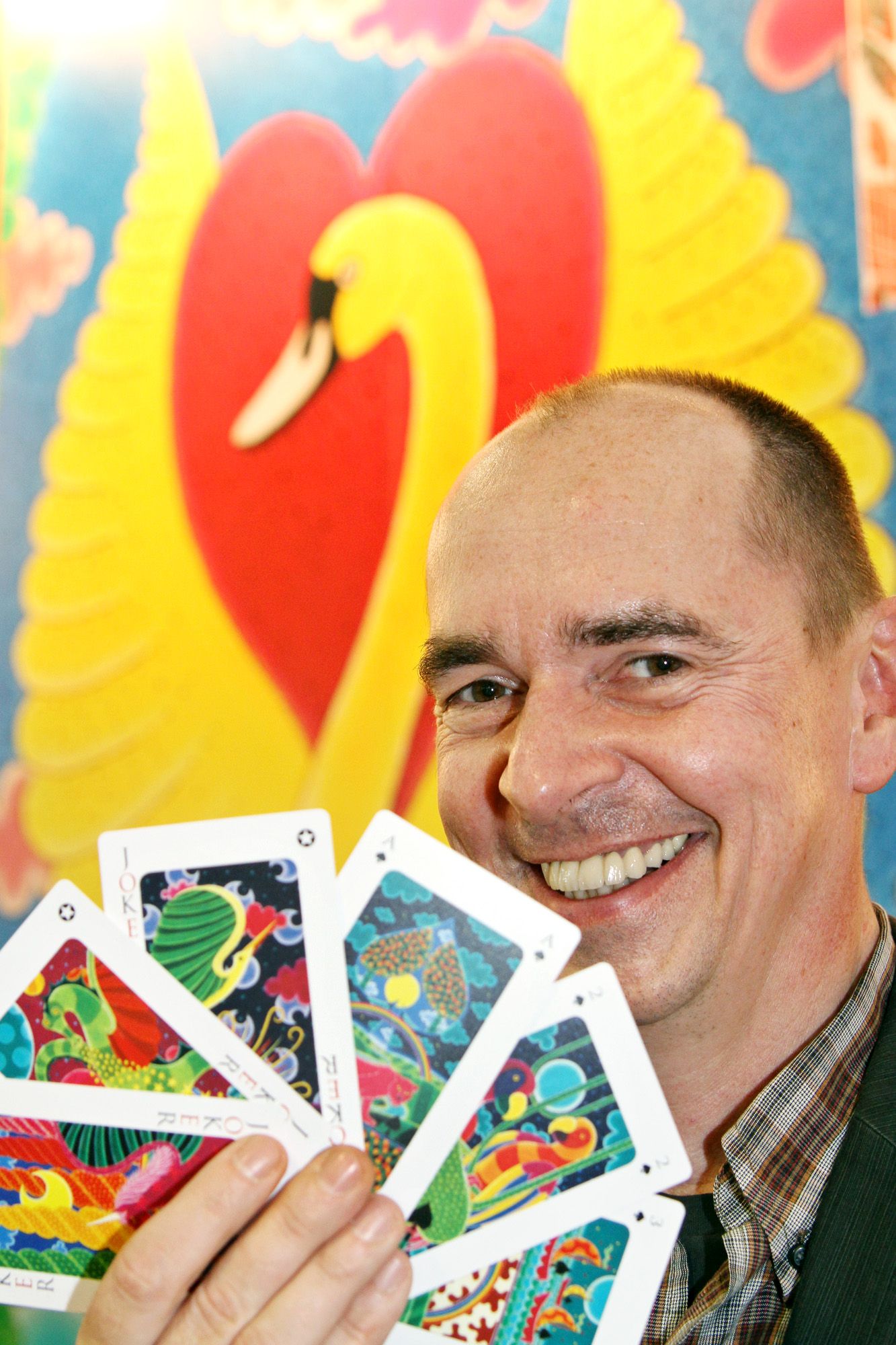 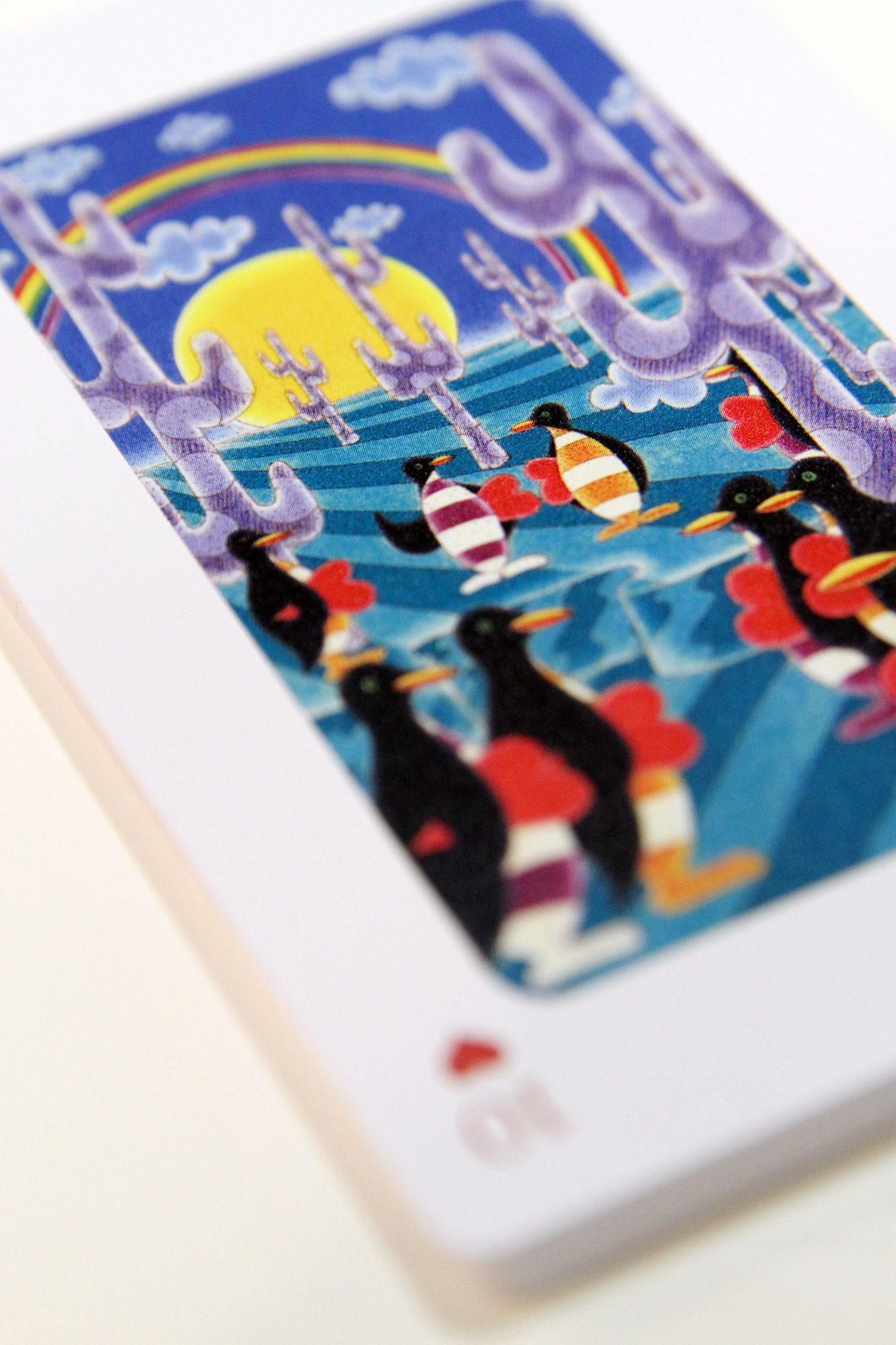 German artist Wolfgang Nocke will dazzle readers at the ongoing Taipei International Book Exhibition (TIBE) with his new art book, which is a combination of a deck of cards, painting, and short stories that promise to plunge us into a world of fantasy and fun.
Nocke spent nearly two years painting a deck of cards, 52 regular cards with 52 different animals, and three jokers with imaginary creatures - a unicorn, a bird of paradise, and a star dragon.
Each of the 55 cards has a different motif; the quantity of the species painted on each corresponding to the number of the card.
Nocke is the third artist in Germany since the 17th century who has created a complete deck of cards by hand.
His new book "Fabelspiel," published by Linking Books, contains the 55 brightly colored cards. Next to each card is a short story of ironic humor or poetic imagination written by Nocke himself.
"It may be strange to combine a deck of cards with paintings and short stories," Nocke said in an interview with the Taiwan News on Thursday.
"This is a book you can play with, so get one and read it."
Nocke met Lin Tsai-chueh, chairman of the Taipei Book Fair Foundation at last year's TIBE, and Lin showed interest in his poker painting, and talked him into the book project. Lin asked if Nocke could imagine writing no more than 30 sensible words in German for each short story that goes with a painting. "I always consider myself a painter, not an author," he said, "but I do not want to be limited to two-dimension painting, and I am happy to do other projects, to write more and make my creation complete."
Nocke was one of the 2009 TIBE featured artists; he was invited by the German Cultural Center in Taipei to hold a solo painting exhibition last March. The German artist has had more than 300 paintings exhibited in Switzerland, Spain, Luxembourg, Austria, and the United States. Using bright colors and geometrical patterns, his paintings often exude a feeling of playfulness and evoke an infinite sense of space.
Nocke paints a lot of animals, but he never paints humans.
Animals are again the lead roles in the art book. He explained that animals give the feeling of exotic worlds, and for him, who was raised in an industrial area, painting things that he did not have in his home town - animals, plants, colors and creating fantasy - are his way of not being frustrated by reality.
One of Nocke's favorite cards, the Kings Club, shows a proud eagle looking at the stone of a castle and thinking to himself that no matter how many stones are put to build a castle, the castle would never fly to the sky.
Nocke said he hoped that readers can get inspired and like a deck of cards, discover the many things in their daily lives, and handle them in a more creative way.
The artist was invited to be artist-in-residence for the 2010 TIBE. He will meet his fans and sign the books from 2:00 p.m. to 3:00 p.m. at the book exhibition today and tomorrow.