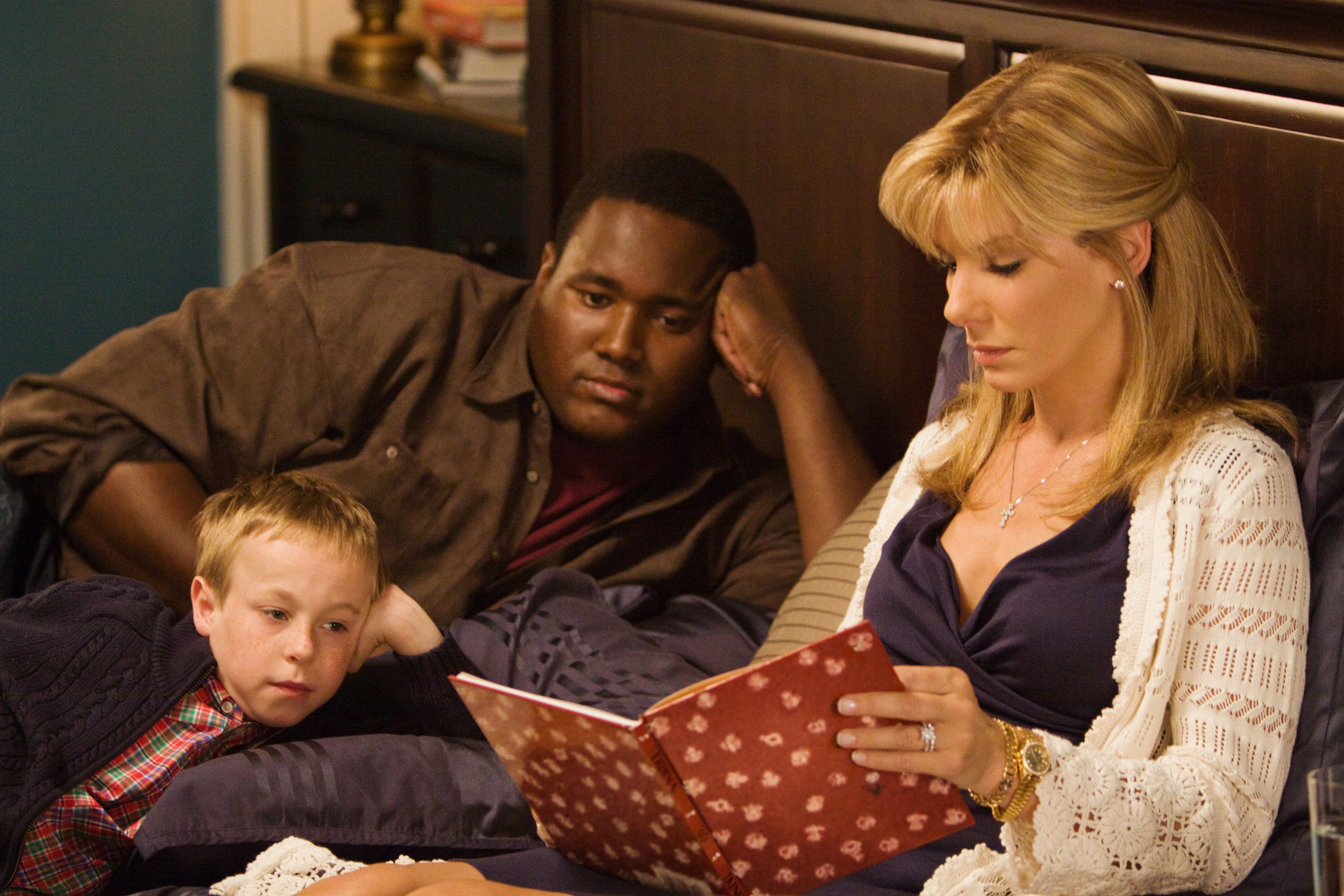 'The Blind Side'
攻其不備
Directed by: John Lee Hancock
Starring: Sandra Bullock, Tim McGraw, Quinton Aaron
Reviewed by: Colin Covert, Star Tribune
Opens Taiwan: Feb. 26
Uplifting. Heartwarming. Schmaltzy but effective. Watching "The Blind Side," I felt my emotions being stage-managed, but once or twice I got something in my eye. It's inspired by a feel-good true story of interracial adoption and gridiron glory. The project could have been designed by scientists synthesizing the crowd-pleasing-movie genome. Bullock + football + Kumbaya = Ka-ching!
Sandra Bullock plays Leigh Anne Tuohy, a steel magnolia whose conservative certitude and indomitable willpower make Sarah Palin look lily-livered. The highway department has bulldozers that are not as pushy. Her husband, Sean (Tim McGraw), owns scores of fast food franchises, her daughter and son go to Memphis' swankiest Christian prep school, and she has a decorating business and country club luncheons to fill her idle hours.
Perhaps her take-charge ego needs a new challenge. For whatever reason, when she sees a black teen walking along a dark roadway, she orders him into her car and takes him home for a sleepover. When she learns that the boy, Michael Oher, has nowhere to live, she gives him a permanent home in her McMansion. The Tuohys are the sort of family that would fight a tax hike for idealistic social programs, but see their Christian duty to do right by Michael. Films don't show us compassionate conservatives like this very often, and I was happy to meet them.
Michael doesn't see his situation in racial terms. ("He thinks he's a redneck," Sean marvels.) Neither do the Tuohys, but they learn a few unpleasant truths about their friends' attitudes. Michael's quiet appreciation of their advantages teaches his privileged new family gratitude. When one of her lunch cronies praises Leigh Anne for changing the boy's life, she insists, "He's changing mine."
Newcomer Quinton Aaron plays Michael as a gentle giant with a broken spirit, so inhibited he's almost mute. He has native intelligence, but a fractured school system has left him unprepared. Leigh Anne brings on a tutor, and when his grades allow him to play on his school's team, he promises to be an unstoppable football star. All he lacks is the killer instinct. Leigh Anne is the woman to teach him about standing his ground and pushing back hard.
The film balances the hugs and life lessons needed in a women's picture with plenty of tackles and touchdowns to please the men. NFL fans know how the story ends, and there's no need to spoil it for everyone else.
Bullock makes her iron-willed matriarch strong, sexy and likable, while McGraw fades into the wallpaper as her yes-man spouse. Young Jae Head is sassy enough for twins as son S.J., who bosses his big (big!) brother around; he's clearly momma's little man.
And here we get into some queasy issues, the one aspect of the film that feels unsatisfactory. The Tuohys never patronize or condescend, but they seem clueless about several acts of racial insensitivity. Leigh Anne comments that easygoing Michael reminds her of Ferdinand the Bull, an endearing comment that carries an unfortunate subtext here. I hope the idea is that the good-hearted Tuohys are novices around black people.
Nearsighted though it occasionally may be, "The Blind Side" makes a strong case for the emotional rewards and social justice of helping others less fortunate. Even if it manipulates us like a sock puppet.