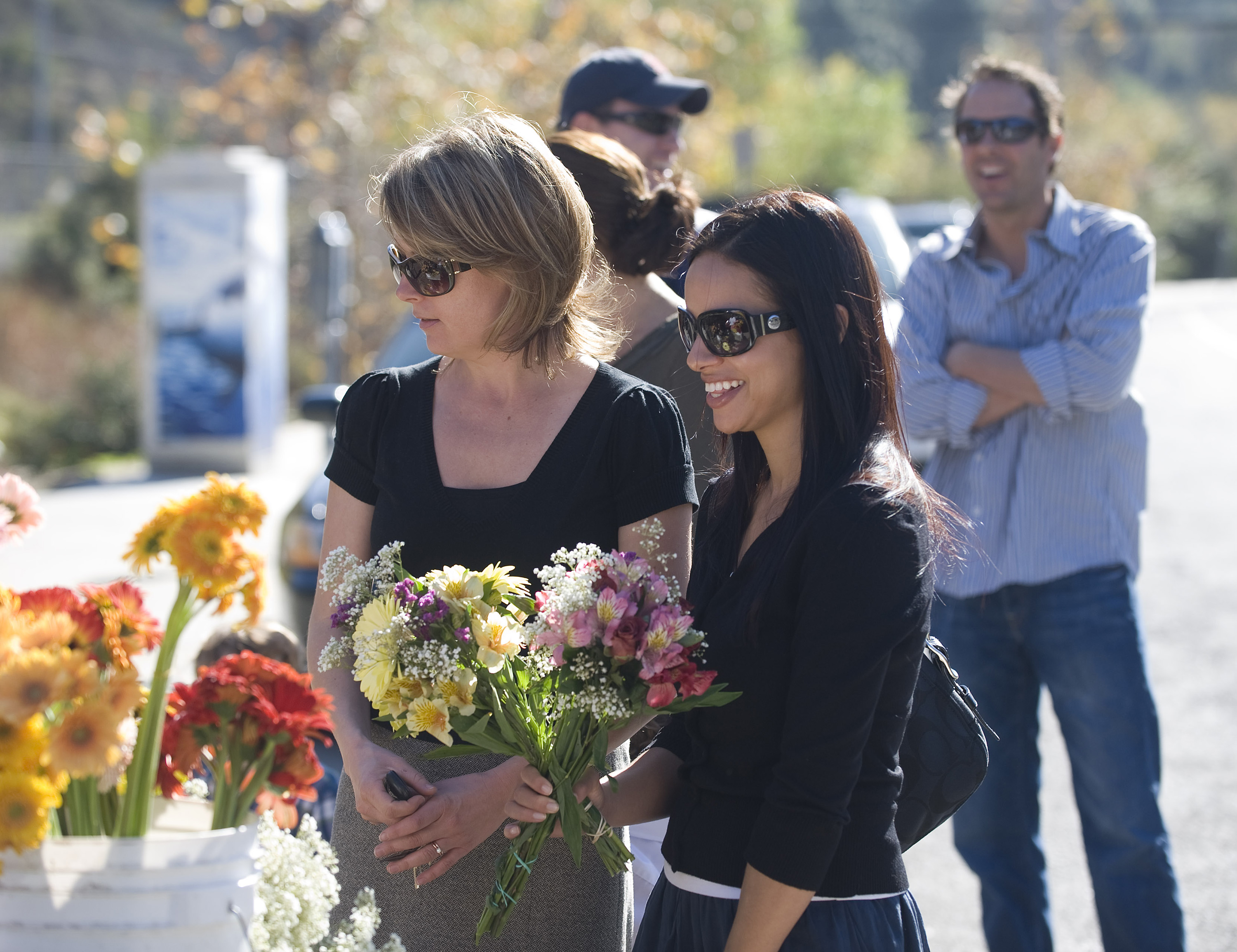 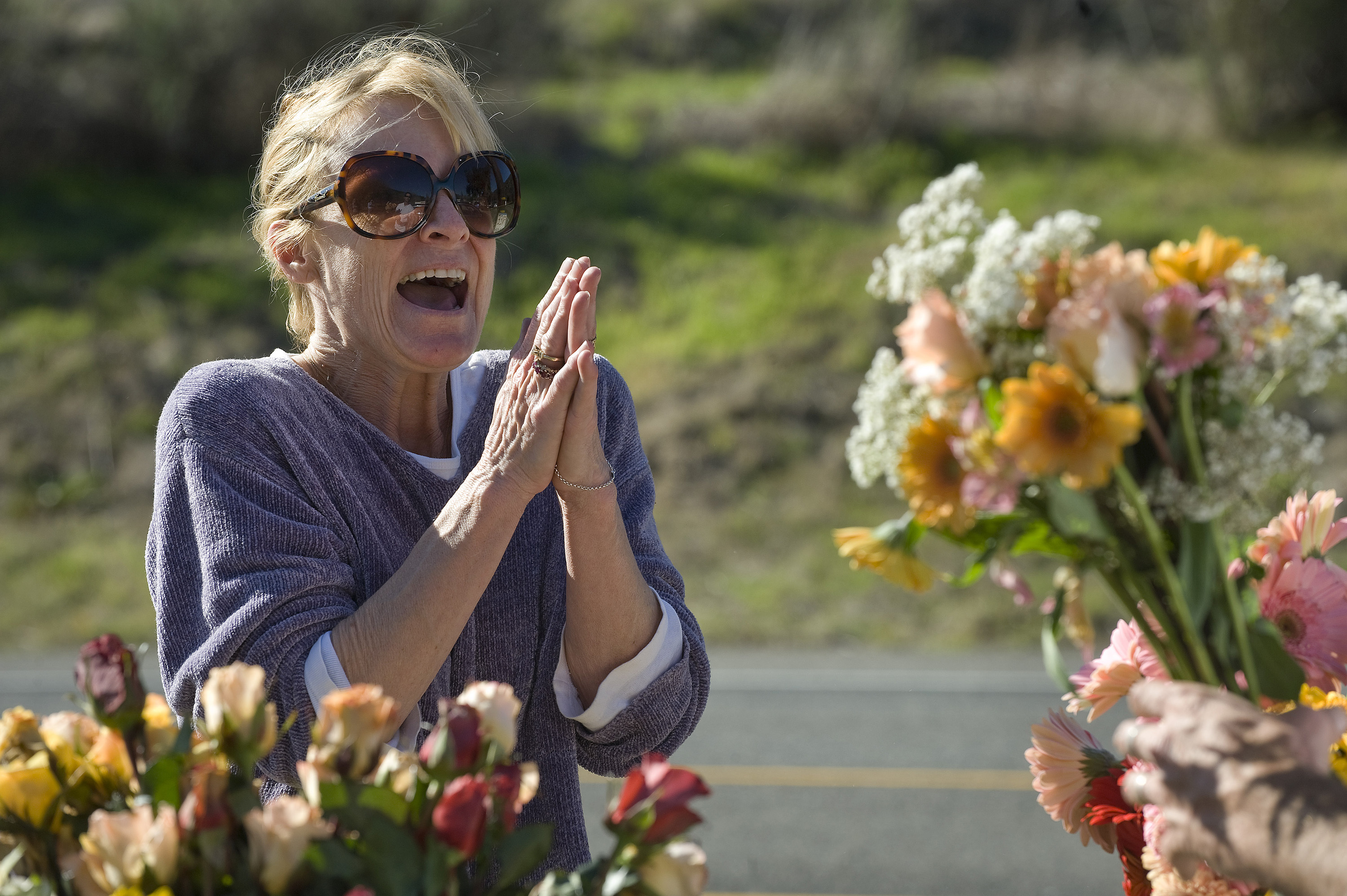 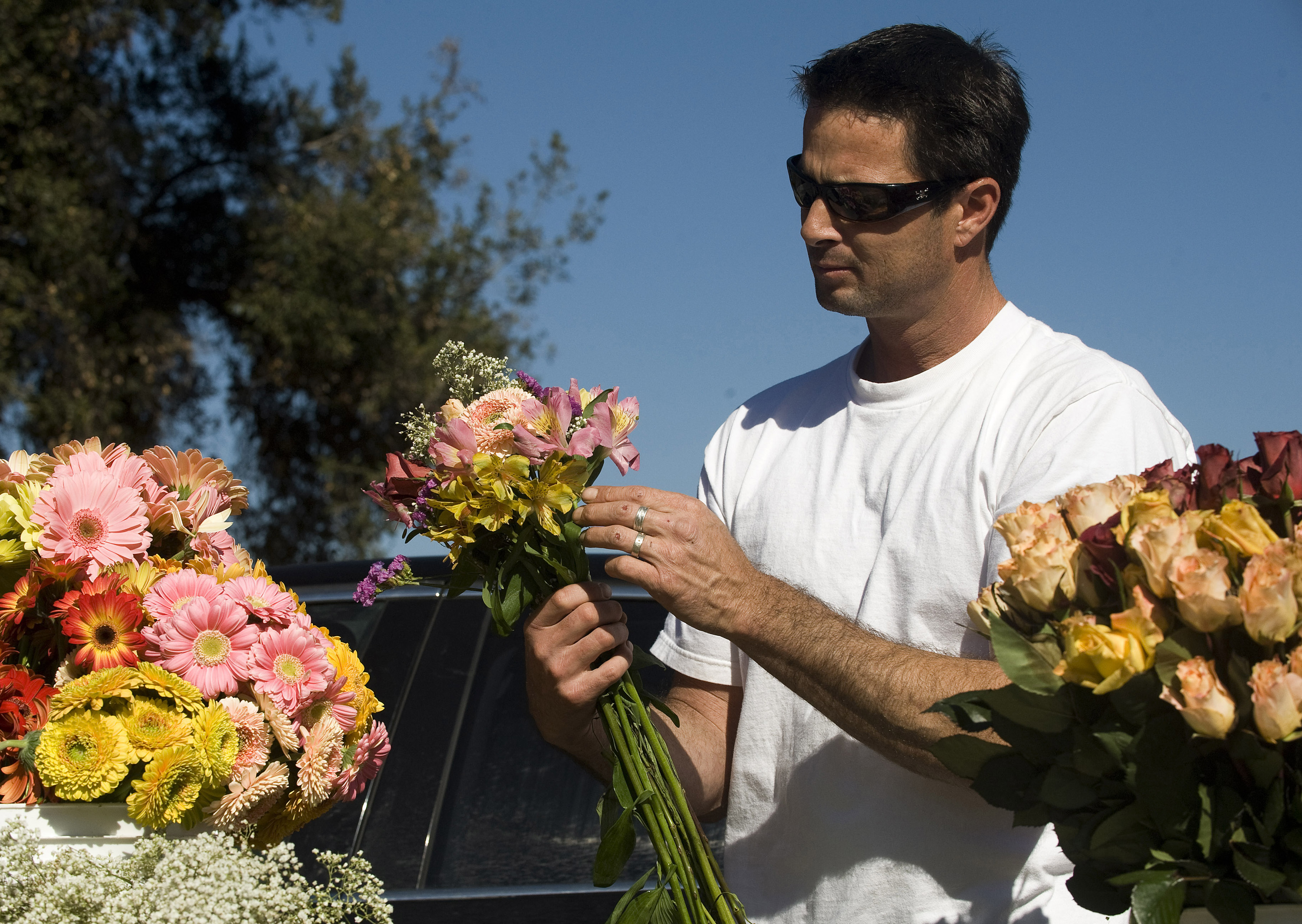 Most cars whiz past Shaun Kieran's flower stand on Laguna Canyon Road, but some drivers can't resist stopping to ask the question:
Free? Really?
Kieran jokes that's why he added "yes, it's true" to the sign he sets up next to his buckets of pink, yellow and purple blooms. For a few weeks now the Cardiff-by-the-Sea resident has been handing out the flowers on the east side of the canyon, between the dog park and Pacific Marine Mammal Center, and he's still honing his message.
"A lot of people don't get flowers," Kieran says.
"And they need to feel special."
The flowers go where flowers go - to grandmothers and girlfriends, wives and husbands. And as people line up in front of his makeshift stand, Kieran asks which flower is their favorite. Then, as he crafts bouquets, Kieran and his non-customers chat about families or work or pets.
"Just walking up it feels happy," said Kirk Manion, who stopped for a bouquet to take to his girlfriend.
Kieran's goal is simple - he wants to brighten people's days. Profit isn't part of the deal. Most of the flowers aren't perfect. He gets what can't be sold from a wholesale vendor in Carlsbad, Calif., in exchange for helping to set up the vendor's booth.
But, he says, a little imperfect beauty is enough to put smiles on people's faces.
"Times are tough, and people are struggling," Kieran says.
To some people, he'll talk about how the flowers' beauty is a reminder that God loves them. To others, he'll simply compliment their smile or commiserate about a disagreement with a spouse.
"I made these just for you," he tells Allie Nevel as he hands her a bouquet.
She smiles and asks if she can add some purple blooms to the bunch of orange and yellow.
"I'm about to cry," she says. "Isn't this a pick me up?"
The reaction is what keeps Kieran returning to the stand with more flowers. His city permit specifies he will not accept payment or gratuities. Before getting the permit, Kieran accepted what people wanted to give.
"People want to say thank you," he says, "and they want to do that financially."
But money was never the core of his flower venture, so Kieran is giving away flowers even though he has to shake his head when people begin to take out their wallets.
"It made it even more satisfying in certain respects," he says.
The idea to hand out flowers came to Kieran about 18 months ago, as he drove behind a store with his daughter, Trinity Faith, now 7, and he saw what he thought were beautiful flowers being tossed in a trash bin.
Kieran ended up filling his trunk, and he and Trinity Faith handed them out to neighbors. When they were done, they had some flowers left over and, seeing the neighbors - and his young daughter - so happy, he decided to expand.
Since then, he's set up flower give-away stalls in Cardiff-by-the-Sea and Carlsbad. And, when his work as a pipe organ restorer and tuner brought him to Laguna Beach, Calif., the flower stand came too.
Before starting his non-venture, Kieran's knowledge of flowers was limited to what he'd learned as a customer at flower shops. Now, he's learning how to arrange stems into bouquets. And as people line up at his stand, they sometimes teach him the more complicated names.
Kieran says his flowers have been part of a memorial service where surfers paddled out to drop them and a fellow surfer's ashes into the ocean. One man who had lost his job and had no money to buy flowers took some to his wife, Kieran adds. Later, the man ran into him while buying groceries and gave him a hug.
"He said it felt like his honeymoon all over again."
When he learned he needed a permit, he found one Laguna Beach officer had actually crossed paths with him before while he was handing out flowers. The officer turned out to be the one who approved the permit.
"I guess it struck the right chord," Kieran says.
Kieran knows about chords.
In the 1960s, after an apprenticeship, Kieran's father, Frank, began a business restoring and tuning pipe organs in Massachusetts. The family moved to California when Kieran was 7, and in the following years he learned to surf and the ins and outs of the family business. Before moving to Cardiff, Kieran lived in Laguna Beach for more than 10 years, then moved to Dana Point and San Clemente. Kieran describes his growing up as a transformation from "carefree surfer guy to respectable businessman and father."
Now, his work as head of the Kieran Organ Company takes him across California and Arizona, tuning pipes and performing some electronic troubleshooting. The busiest times of the year are just before Christmas and Easter, and he employs two technicians, while his wife works as office manager. Though the job requires long hours and a lot of time on the road, Kieran said he enjoys contributing to people's worship, something he sees as eternal.
"I really feel honored to be in this line of work," he says.