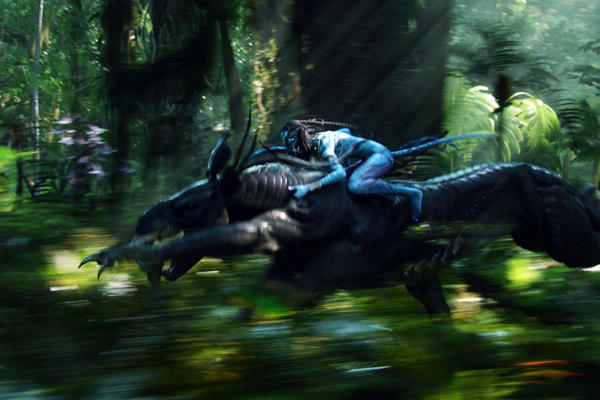 In a mere 41 days, "Avatar" overtook Titanic to become the highest-grossing movie ever at the worldwide box office at US$1.859 billion, compaired to Titanic's US$1.843 billion.
This sudden rise comes with a few curiosities:
First, the power of Hollywood as an American export
Many U.S. conservative groups have written off "Avatar" as a 160-minute liberal, tree-hugging, pagan, anti-American diatribe. Whether or not such messages lie in the forests of Pandora, foreign audiences have flocked to the science-fiction movie. Seventy percent of its earnings came from overseas.
Few of 2009's other top films share such a pronounced split. "Harry Potter and the Half-Blood Prince" came close with 67 percent of ticket sales coming from abroad - but most releases dipped below 50 percent.
But don't think Avatar has tottered domestically. In the U.S., it's come in first place for six weeks in a row. If you only count American ticket sales, "Avatar" is again the No. 2 top-grossing movie of all time. But the margin between it and "Titanic" is much greater: US$600 million to US$552 million.
Second, the speed if its ascent
"Titanic" steamed ahead for 10 months before leaving theaters. "Avatar" has only been out for 6 weeks.
The new film still has plenty of fight in it, but maybe not 10-months worth. Theaters will keep screening the movie for as long as it makes money. But often they will show blockbusters in a smaller room each week - one that best fits a film's diminishing returns. It will be interesting to see what happens when competing 3-D movies come out - such as "Shrek the Fourth" in May and "Toy Story 3" in June. One of the biggest selling points of "Avatar" is its third dimension. Since the spectacle requires a special projector and lots of polarized glasses, few theaters will be able to support more than one 3-D movie at a time. They could show the 2-D version of "Avatar," but that will mean convincing viewers that the "flat" version is worth seeing again. Will theaters and audiences bother?
Third, will the DVD fall far from the tree?
"Avatar" has been great news for theaters, but there are very few ways to bring the extra dimension home with you. As we wrote earlier this month:
Despite the best efforts of pitchmen at this week's Consumer Electronic Show in Las Vegas, very few families can play 3D movies at home. Will a flat version of "Avatar" attract the same following? The good news for studios is that "Up," "Monsters Vs. Aliens," and "Ice Age: Dawn of the Dinosaurs" - the 3D movies that cracked 2009's top-grossing list for theaters - also broke into the top ten for DVD sales.
There's little chance that 3D TVs will become mainstream by the time "Avatar" hits store shelves as a disc. But the movie will join the growing list of reasons to scoop up a new television.