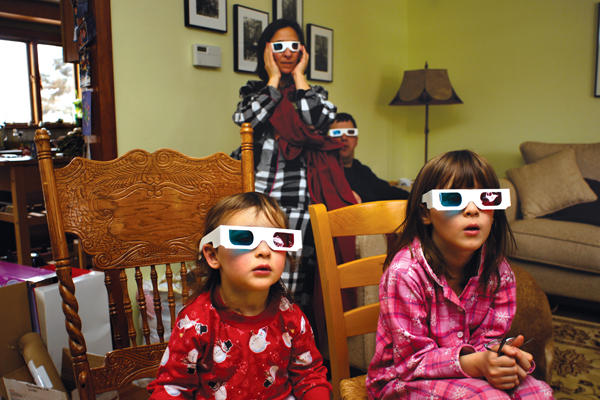 It seems every year is heralded as "the year 3-D home entertainment will take off." Yet the moment never really arrives.
Last year saw huge strides for 3-D movies in theaters. Each of the seven top-grossing 3-D movies of all time came out in 2009. Atop the list sits "Avatar," which raked in more than US$1.6 billion worldwide and became history's second biggest box-office hit in only a few weeks. And animation powerhouse Pixar, hungry for similar successes, stuck to its pledge to only make 3-D movies from now on.
This is great news for theatergoers, but there are very few ways to bring the extra dimension home with you.
Some ads, shows, or DVDs take advantage of the cheap, red-and-blue paper glasses that have been around for decades. But the effect pales in comparison to the thick-rimmed polarized lenses used in most theaters.
Blu-rays in three dimension
Blu-ray wants modern TVs to go a step beyond that. Last month, the group behind the high-definition discs finalized plans to let Blu-rays play movies in three dimensions. The setup requires a new Blu-ray player (older ones may not work), special TVs capable of flashing twice as many frames per second as normal, and "active shutter" glasses. The headgear, which for now looks like angular superhero goggles, rapidly cover and uncover alternating eyes in sync with the TV flickering between left and right images.
ESPN's 3-D sports network
The same glasses will work with ESPN's upcoming 3-D sports network, which will broadcast 85 live events in 2010 starting with the first World Cup match on June 11. The battery-powered lenses cost US$25 to US$100 each, plus the cost of updating your TV and devices. This sizable price tag has many skeptical about whether the 3-D scheme will succeed.
"I'm thinking the glasses thing could be a huge barrier to entry (particularly if they don't make them look a lot less dorky)," writes Rob Enderle, principle analyst of the California-based Enderle Group, in a research note. "I'm wondering if the home market won't wait until we figure out a way to do this without glasses."
A Future close at hand
Such a future may be close at hand. At a Tokyo technology expo in October, Japanese device giant Pioneer unveiled a way to watch 3-D images without special glasses. Rather than forcing a third dimension out of a flat screen, Pioneer built a small circular stage. While it only works from certain angles, the 6-in. screen plays with light in a way that makes the image appear to be floating in front of the device. Built-in sensors also react to touch and sound. (Sony demonstrated a similar, cylindrical device at the same tech show.)
Pioneer sells its experimental device in Japan for about US$542. But the company warns that owners will need to program their own fun, since no one is designing commercial movies or games for the device.
Still, Blu-ray, ESPN, and Pioneer have given 3-D-at-home fans a lot to look forward to in 2010 - or at least in the years to come.