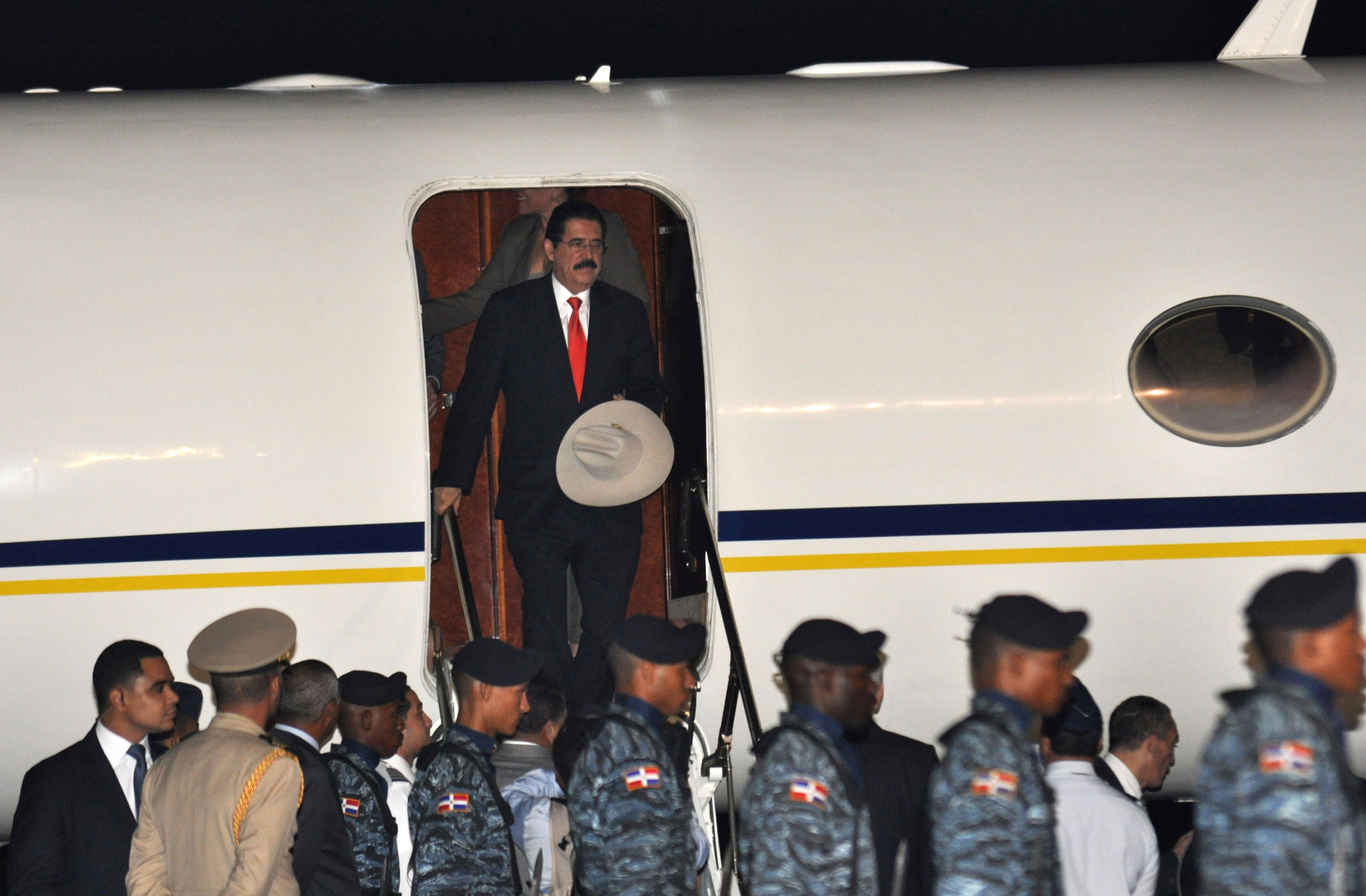 Former Honduran President Manuel Zelaya left his refuge in the Brazilian Embassy and flew into exile after his successor took office Wednesday, ending months of turmoil during his failed quest to be restored to power after a coup.
The leftist leader drove past soldiers guarding the diplomatic compound in long caravan and headed for the airport accompanied by new President Porfirio Lobo, said Hilda Cruz, an assistant of Zelaya's wife.
Before boarding the plane to leave Honduras, Zelaya shouted: "We'll be back! We'll be back!"
Thousands of his supporters gathered outside Toncontin airport yelled "Mel, our friend, the people are with you!" as his plane took off.
Zelaya arrived in the Dominican Republic a few hours later as a private citizen under a deal signed by Lobo and that Caribbean country's President Leonel Fernandez, who flew to Honduras to accompany the former president.
After landing in Santo Domingo, Zelaya thanked all those who supported his unsuccessful seven-month struggle to be reinstated.
"It was an effort that failed, but it was an effort that left us lessons to be learned," Zelaya said. "Violence will always lead to bad decisions, weapons are not the road to democracy."
He expressed concern about alleged persecution of his allies, but noted an amnesty approved by the Honduran congress Tuesday for acts carried out in months leading up to coup "will be of some use in the process of national reconciliation." And he urged Lobo to do more to bring about "reconciliation, the rule of law and an end to persecution.
He gave no further details of his plans, saying it would be "premature to formulate hypotheses about the future."
Lobo, who was sworn into office hours earlier, had said his first task as president would be providing Zelaya a safe passage out of the country.
"We have emerged from the worst crisis in the democratic history of Honduras," said Lobo, 61, after taking the oath of office. "We want national reconciliation to extend to a necessary and indispensable reconciliation with the international community."
Zelaya, who was ousted in a dispute over changing the Honduran Constitution, insisted he was still president up until the moment his four-year constitutional term officially ended Wednesday.
Zelaya left with his wife, two children and an aide after four months holed up in the embassy. The couple had their hair done by a stylist, packed five suitcases and said they were taking Zelaya's guitar and Christmas cards from supporters.
It was a quiet end to his tumultuous struggle to return to power after soldiers stormed his residence and flew him out of the country in his pajamas.
"He's done. I think at this point, if you are Zelaya, you slink away into the corner and you recoup for a little while," said Heather Berkman, a Honduras expert with the New York-based Eurasia Group. "But I think in the near term, Zelaya is finished as a politician."
The country's institutions moved quickly this week to try to leave the coup behind.
A Supreme Court judge found six generals innocent of abuse of power charges for ordering soldiers to hustle Zelaya out of the country at gunpoint. And Congress voted to approve amnesty for both the military and Zelaya, who had been charged with abuse of power and treason over his defiance of a Supreme Court order to cancel a referendum on changing the constitution.
He remains under investigation for embezzlement in connection with US$1.5 million in government funds.
Opponents said Zelaya wanted to hold onto power by lifting a ban on presidential re-election, as his ally Venezuelan President Hugo Chavez did. Zelaya denies that and says he only wanted to give more voice to Honduras' many poor and shake up a stagnant political system dominated by a few wealthy families.