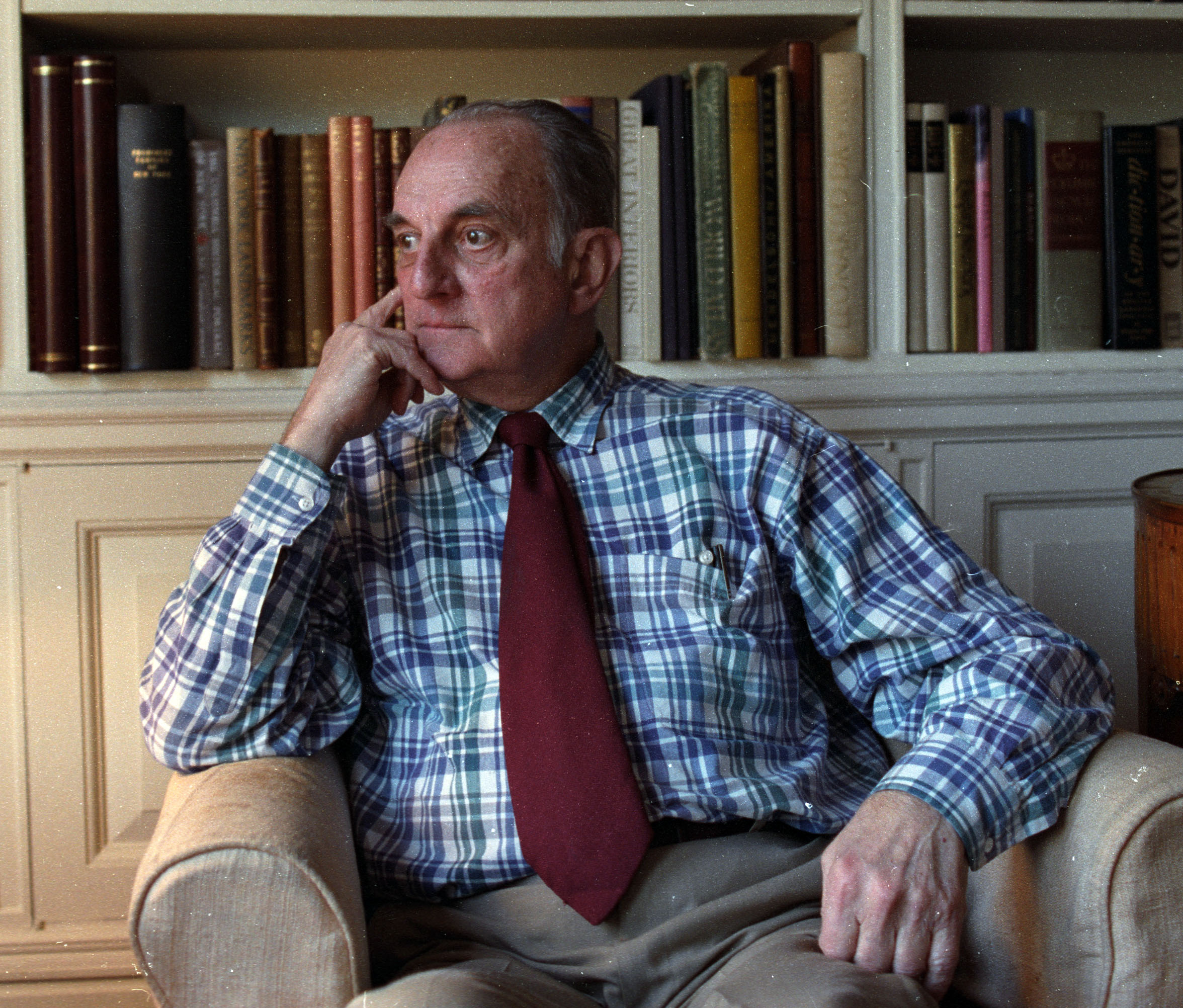 Louis Auchincloss, a prolific author of fiction and nonfiction whose dozens of books imparted sober, firsthand knowledge of America's patrician class, has died. He was 92,
The author's grandson, James Auchincloss, said Wednesday that Auchincloss died Tuesday, a week after suffering a stroke.
Louis Auchincloss' wife, Adele, an artist and environmentalist, died in 1991. They had three sons.
He wrote more than 50 books, averaging about one a year after the end of World War II, and crafted such accomplished works as the novel "The Rector of Justin" and the memoir "A Writer's Capital," not to mention biographies, literary criticism and short stories. He was a four-time fiction finalist for the National Book Award, his nominated novels including "The Embezzler" and "The House of Five Talents."
"I'm rather inclined to be edgy when I'm not writing," Auchincloss said in a 1994 interview with The Associated Press. "In (a) ... book on Jack Kennedy, it says he told (British) Prime Minister (Harold) Macmillan that if he didn't have a girl every three days he'd get headaches. I thought that was rather extreme, but writing is little bit like that for me."
Auchincloss lived up to the old world ideal of being "useful," bearing the various titles of writer, attorney, community leader and family man. He was a partner at the Wall Street firm of Hawkins, Delafield & Wood and the father of three. He served as president of both the Museum of the City of New York and the American Academy of Arts and Letters. He was also a cousin by marriage to Jacqueline Kennedy Onassis, and she worked with him when she was a book editor late in her life. He described her as "a shrewd and imaginative editor of prose, and she has impeccable taste in illustrations. She's always done things very well, ever since she was a little girl."
Auchincloss had an old-fashioned aversion to change, and his presence could be likened to a building granted landmark status. Into his 90s, his stride was erect, his jaw line stubbornly firm, his dark, moody eyes less windows to the soul than the most discriminating of gatekeepers.
For subject matter, he followed the advice Henry James once offered to Edith Wharton: "Do New York. The firsthand account is precious." Auchincloss documented an exclusive, influential world of which he was both member and critic. Readers were taken into boardrooms, country clubs, summer homes at Bar Harbor, dinner parties on Fifth Avenue.
This led both to praise and criticism, sometimes with the same, ambiguous compliment, "America's foremost novelist of manners." It was not unlike being called "America's premier polo player" or "America's finest maker of top hats." In 1970, the critic Granville Hicks derided Auchincloss' "little world," saying it had nothing to do with the rest of society. In response, Gore Vidal defended Auchincloss for informing readers about "the role of money in our lives" and showing "how generations of lawyers have kept intact the great fortunes of the last century."
On Wednesday, Vidal praised Auchincloss as a close friend whose literary subject was unique. "Nobody else took those kinds of people, because nobody else understood them, except in the dumbest way," Vidal said.
Auchincloss did not seek to praise the rich, but to make sense of them. He was a Puritan who brooded over the conflicts between money and principles, over the privileged person's right to be happy. Several of his best-known books featured introspective young men and women. "How can you live in the times we live in and not feel, 'Doesn't there have to be some evening up?' 'Why should I have this wonderful life when those people went through what they did in Germany?'" Auchincloss said.
He was born in New York in 1917, his ancestors having arrived from Scotland more than a century before.
Hillel Italie is an Associated Press writer.