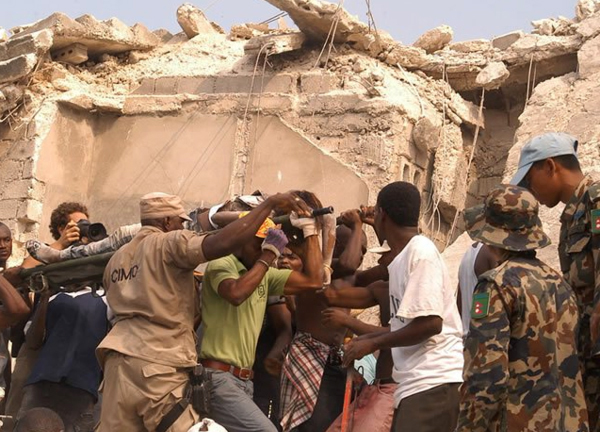 Dazed and injured Haitians sat on darkened streets pleading for help yesterday and untold numbers were trapped in tons of rubble brought down by the strongest earthquake to hit this poor Caribbean nation in more than 200 years.
The extent of destruction from Tuesday afternoon's 7.0-magnitude tremor was far from clear _ and estimating the number of casualties was impossible, save for the dead lying among thousands of collapsed buildings in Haiti's capital.
The ornate National Palace crumbled into itself, the headquarters of the U.N. peacekeeping mission collapsed, and swaths of rickety shacks lay in shambles. Clouds of dust thrown up by falling buildings choked Port-au-Prince for hours.
The United States and other nations began organizing aid efforts, alerting search teams and gathering supplies that will be badly needed in Haiti, the Western Hemisphere's poorest country. The international Red Cross and other aid groups announced plans for major relief operations.
Associated Press journalists found the damage staggering even for a country long accustomed to tragedy and disaster.
Aftershocks rattled the city as women covered in dust clawed out of debris, wailing. Stunned people wandered the streets holding hands. Thousands gathered in public squares long after nightfall, singing hymns.
It was clear tens of thousands lost their homes and many perished in collapsed buildings flimsy and dangerous even under normal conditions.
"The hospitals cannot handle all these victims," Dr. Louis-Gerard Gilles, a former senator, said as he helped survivors. "Haiti needs to pray. We all need to pray together."
An Associated Press videographer saw a wrecked hospital where people screamed for help in Petionville, a hillside Port-au-Prince district that is home to many diplomats and wealthy Haitians as well as the poor.
At a destroyed four-story apartment building, a girl of about 16 stood atop a car, trying to peer inside while several men pulled at a foot sticking from rubble. The girl said her family was inside.
U.N. peacekeepers, most of whom are from Brazil, looked for survivors in the ruins of what had been their five-story headquarters. U.N. peacekeeping chief Alain Le Roy said late Tuesday that "as we speak no one has been rescued."
Le Roy said many U.N. personnel were missing, including mission chief Hedi Annabi, who was in the building when the quake struck. Some 9,000 peacekeepers have been in Haiti since a 2004 rebellion ousted the president.
A state newspaper in China said eight Chinese peacekeepers serving in Haiti were known dead and 10 were missing.
Much of the National Palace pancaked on itself, but Haiti's ambassador to Mexico, Robert Manuel, said President Rene Preval and his wife survived the earthquake. He had no details.
The 7.0-magnitude quake struck at 4:53p.m., centered 15km west of Port-au-Prince at a depth of just 8km, the U.S. Geological Survey said. USGS geophysicist Kristin Marano called it the strongest earthquake since 1770 in what is now Haiti.
The temblor appeared to have occurred along a strike-slip fault, where one side of a vertical fault slips horizontally past the other, said Tom Jordan, a quake expert at the University of Southern California. The quake's power and proximity to Port-au-Prince likely caused widespread casualties and structural damage, he said.
"It's going to be a real killer," he said.