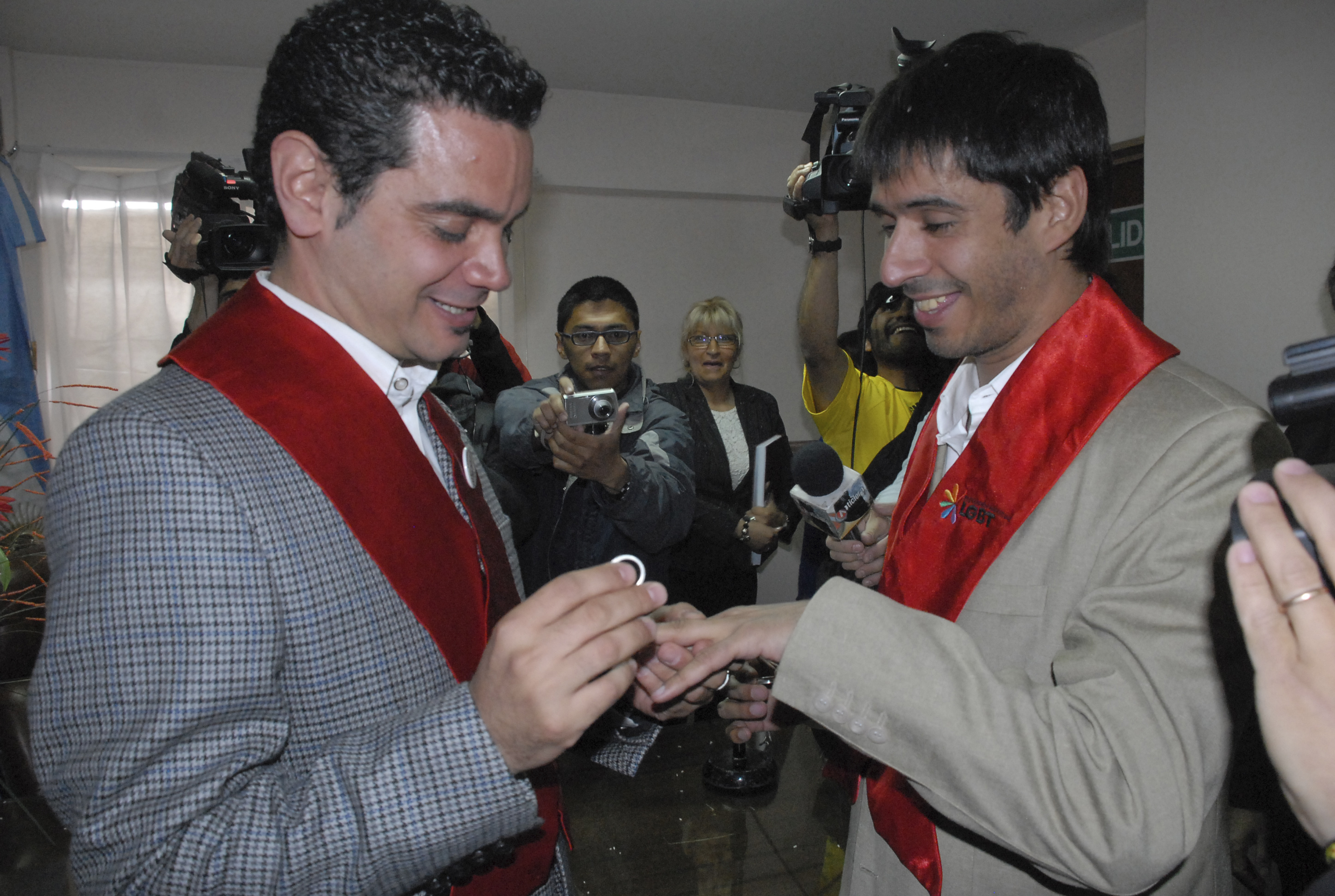 They had to travel to the ends of the Earth to do it, but two Argentine men succeeded in becoming Latin America's first same-sex married couple. After their first attempt to wed earlier this month in Buenos Aires was thwarted, gay rights activists Jose Maria Di Bello and Alex Freyre took their civil ceremony to the capital of Argentina's Tierra del Fuego province, where a sympathetic governor backed their bid to make Latin American history.
The couple exchanged rings Monday in Ushuaia, the southernmost city in the world, closer to Antarctica than Buenos Aires. The informal ceremony was witnessed by state and federal officials.
Di Bello, 41, an executive at the Argentine Red Cross, met Freyre, 39, executive director of the Buenos Aires AIDS Foundation, at an HIV awareness conference. Both are HIV-positive.
At the indoor civil ceremony, the grooms wore sport coats without ties, and had large red ribbons draped around their necks in solidarity with other people living with HIV.
Argentina's Constitution is silent on whether marriage must be between a man and a woman, effectively leaving the matter to provincial and city officials. The men tried to get married in Argentina's capital but city officials, who had earlier said the ceremony could proceed, refused to wed them citing conflicting judicial rulings.
Di Bello said Ushuaia initially declined to authorize the marriage, but went ahead after the couple received backing from Tierra del Fuego province. Gov. Fabiana Rios said in a statement that gay marriage "is an important advance in human rights and social inclusion and we are very happy that this has happened in our state."
An official representing the federal government's antidiscrimination agency, Claudio Morgado, attended the wedding and called the occasion "historic." Many in Argentina and throughout Latin America remain opposed to gay marriage, particularly the Roman Catholic Church.
But same-sex civil unions have been legalized in Uruguay, Buenos Aires, Mexico City and some states in Mexico and Brazil. Marriage generally carries more exclusive rights such as adopting children, inheriting wealth and enabling a partner to gain citizenship.
Legal analyst Andres Gil Dominguez said the Tierra del Fuego government appeared to base its authorization on a broad interpretation of the Argentine Constitution and obligations under international treaties.
Rios said her province's approval was based on a ruling by a Buenos Aires judge who declared two provisions of the constitution discriminatory and gave the go-ahead for the Dec. 1 marriage, which was then blocked by another judge's ruling based on civil law. Individual provinces may not have final say over same-sex marriages for long.
A bill that would legalize gay marriage was introduced in Argentina's Congress in October but it has stalled without a vote.
Argentina's Supreme Court currently is analyzing appeals by same-sex couples whose marriages were rejected. A Supreme Court justice said on Monday that the high court would likely rule on issues of same-sex marriage sometime in 2010, but could defer to Congress if legislation moves forward.
Only seven countries in the world allow gay marriages: Canada, Spain, South Africa, Sweden, Norway, the Netherlands and Belgium. U.S. states that permit same-sex marriage are Iowa, Massachusetts, Vermont, Connecticut and New Hampshire.
Almudena Calatrava is an Associated Press writer.