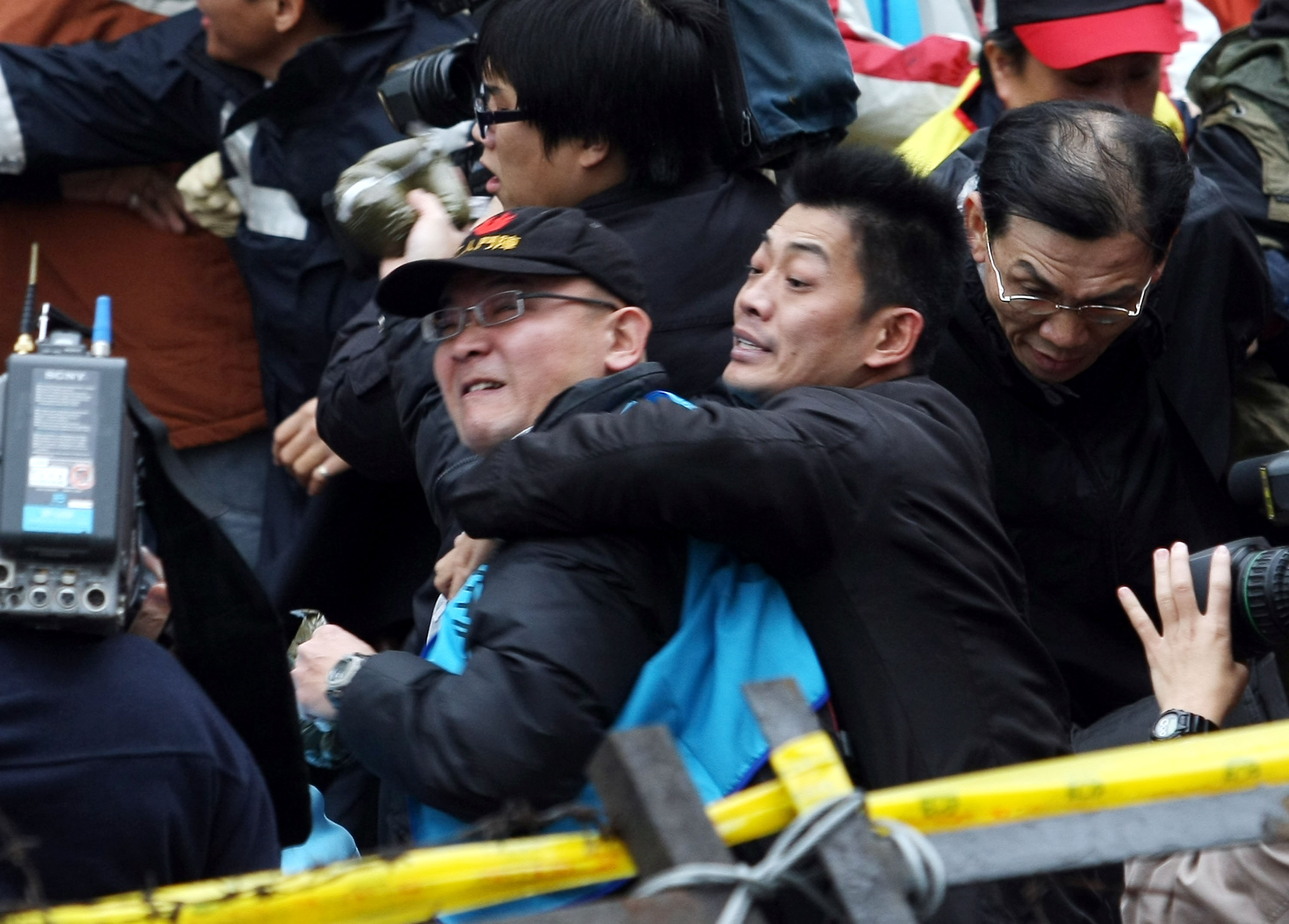 Protesters from labor unions threw cow dung at the headquarters of the ruling Kuomintang yesterday to protest against restrictive legislative proposals.
The unions voiced their opposition against a proposal now under second reading at the Legislative Yuan which gives the government the right to disband unions and restricts their membership.
The labor activists also accused President Ma Ying-jeou of not having done anything for workers in the more than 19 months since he took office.
Ma, who is also KMT chairman, was inside the building at the time of the protests, attending the weekly meeting of the party's Central Standing Committee.
Some protesters had brought paper shopping bags filled with cow dung wrapped in plastic. Scuffles broke out when the protesters began throwing the dung at the KMT building over the barricades and over the heads of police officers.
Nets were erected to try and prevent the dung from hitting the building, but some officers were reportedly hit. Police warned the union activists that the demonstration was illegal because no permission had been asked. About 500 protesters were gathered at the scene, reports said.
As Ma's motorcade was leaving the KMT headquarters, a woman union official threw objects at the vehicles, leading to a large-scale confrontation. Police succeeded in pulling the woman from the crowd, taking her and four others to the Yuanshan precinct for questioning. Union leaders immediately demanded their release.
The protesters shouted "We want autonomy, no to martial law" and held up banners reading "insist on union neutrality."
They demanded to meet a representative from the KMT, at least secretary-general King Pu-tsung, but nobody turned up to hear their grievances, reports said.
Because Ma had not delivered on any of his promises, union leaders said they might organize a series of protests in the run-up to his second anniversary in power next May 20.
At a news conference yesterday morning, Taiwan Labor Front Secretary-General Sun Yu-lien said laborers were not feeling anything of the economic revival touted by the government and the media.
"If the government says the swallows are returning, then we should form a bird-watching team to keep its eyes on the Presidential Office," Sun said, satirizing government claims of imminent economic recovery.
He also lashed out at Ma's failure to realize his campaign promises of 6 percent economic growth, US$30,000 average income and 3 percent unemployment. Even though the jobless rate was now falling back from a summer peak of 6 percent, the number of long-term unemployed had risen faster than ever.