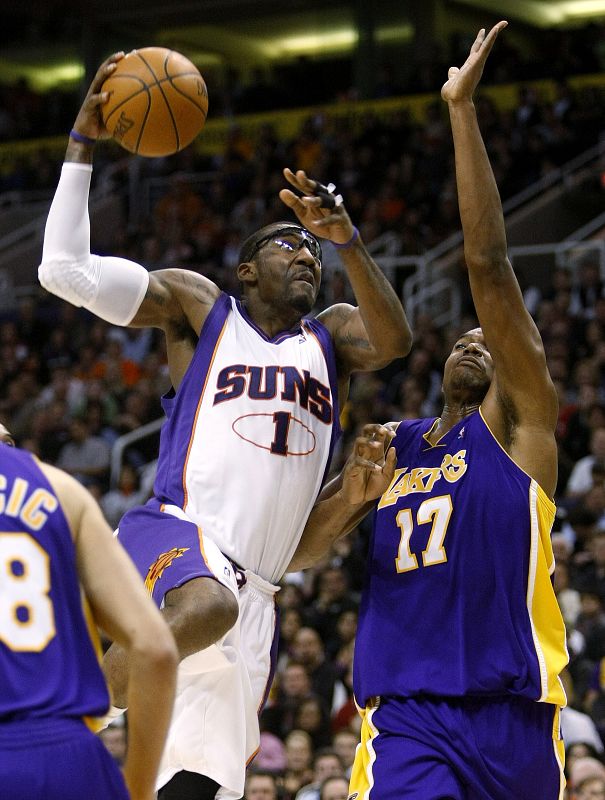 Amare Stoudemire poured in 26 points, and Jared Dudley matched his career high with 19 Monday as the Phoenix Suns handed the Los Angeles Lakers their second defeat in three NBA contests.
Steve Nash had 16 points and 13 assists and the Suns' reserves outscored their Los Angeles counterparts 52-31 as Phoenix triumphed 118-103.
Kobe Bryant scored 34 for the Lakers but sat out nearly eight minutes at the end after Los Angeles coach Phil Jackson judged the game out of reach.
Phoenix led by as many as 12 in the second quarter, 19 in the third and 22 in the fourth to improve to 12-2 at home. The Suns boast a victory over all three teams with the three best records in the NBA: the Lakers, Boston and Orlando. Reigning NBA champs Los Angeles were without Ron Artest for the second game in a row.
He suffered a concussion and an injured elbow in a fall at his house on Christmas Day. The margin of victory matched the 15-point triumph Cleveland notched over the Lakers in Los Angeles on Christmas Day.
Only a late spurt kept it from being the most one-sided loss of the season for the Lakers.\ Los Angeles' lone win in their last three was a double overtime victory in Sacramento on Saturday.