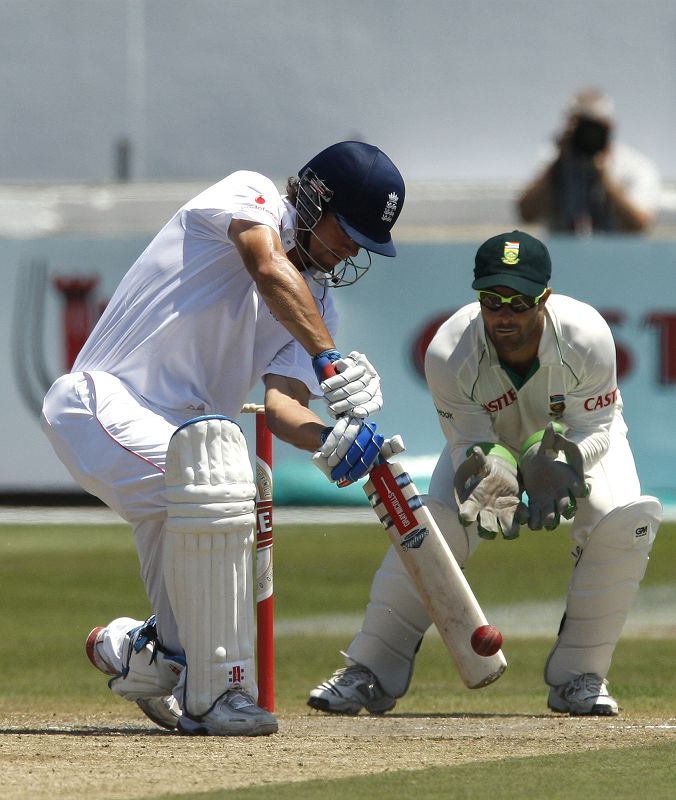 Alastair Cook gave credit to former England captain Graham Gooch after he ground out a century to take England into a first innings lead on the third day of the second Test against South Africa at Kingsmead on Monday.
Opening batsman Cook made 118 and Paul Collingwood 91 as England reached 386 for five at the close, a first innings lead of 43.
Cook said he spent many hours working with Gooch on changes to his technique after the Ashes series against Australia earlier this year.
"It takes time and the work is nowhere near finished but this helps with the confidence and to know you are on the right track," said the left-handed opening batsman.
Cook said the major changes to his batting style were his trigger movements, backlift and alignment.
He said 'relief' described his feelings on reaching his first century in 12 Test innings. It was also the first time in nine innings that he had scored more than 32.
"The last few games the team has been playing well and you haven't really contributed, so you feel like you're being carried by your teammates a bit. It's nice to repay that."
Cook said the South Africans bowled "with a lot of discipline all day" and the task on Tuesday would be to bat through the first hour and try to secure as big a lead as possible. "We saw what happened (in the first Test) at Centurion so we can't get too far ahead of ourselves."
A patient fourth wicket partnership of 142 between Cook and Collingwood put England in a strong position as South Africa's bowlers toiled under a hot sun in the best batting conditions of the match.
It was slow going for the most part against disciplined bowling but Ian Bell gave the innings impetus after tea as he hurried to a stroke- filled half-century off 65 balls. Bell, who like Cook had been under pressure to make runs, finished the day on 55 not out.
Tall fast bowler Morne Morkel was easily South Africa's best bowler, taking three for 69. Although his teammates plugged away on an easy- paced pitch, Morkel was the only bowler who consistently looked likely to take wickets.
For the first time in the match, there was a full day's play, with 283 runs scored in 96.4 overs under a cloudless sky for the loss of four wickets.
South African coach Mickey Arthur praised his bowlers. "It was a hard day but they stuck to their task very well."