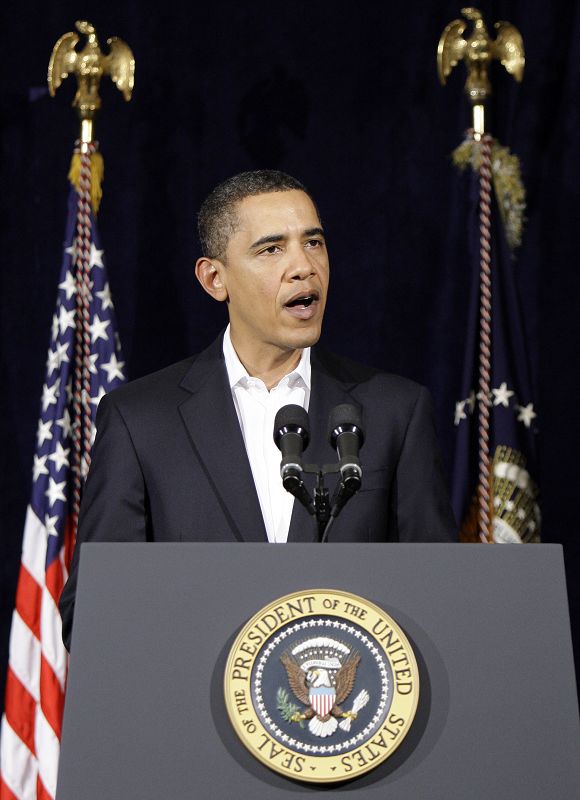 After a sleepless, overnight flight to Oslo to accept the Nobel Peace Prize earlier this month, President Barack Obama made a not altogether surprising admission. He was tired.
Who could blame him? The president was on his ninth foreign trip to his 21st country; he added a 10th trip the following week. The year had been bookended by the two most intense periods of his young presidency - the early decisions to bail out the nation's banks and automobile industry, steps the president deemed unpopular but necessary, and his December orders to deploy 30,000 additional U.S. troops to fight the war in Afghanistan.
Throw in a 10 percent unemployment rate, a health care bill still stuck on Capitol Hill, and last-minute negotiations on a global climate change agreement, and aides say it's no secret that the president is tired, and looking forward to recharging during his year-end family vacation in Hawaii.
Obama himself has been candid about the pressures of being president during what he has called an "extraordinary year."
"You have a convergence of factors that have made this a difficult year not so much for me but for the American people," he said in an interview with CBS News last month. "Absolutely that weighs on me."
That weight was particularly striking during the president's exhaustive, three-month review of the U.S. strategy in Afghanistan. Images of a visibly tired Obama, his black hair now flecked with gray, greeting the bodies of fallen soldiers at Dover Air Force Base and walking through rows of headstones at Arlington National Cemetery sparked rumors that he was skipping meals and losing weight.
Not true, the 48-year-old Obama said. His weight never fluctuates more than 2.25kg and he still wears the same clothes he wore when got married 17 years ago. But the gravity of war did take its toll in other ways.
"With this one, you feel it viscerally," he said in a White House interview with ABC News. "You lose sleep. You think about families. You think about history."
Aides who have known Obama since before he took office say he seems more sober than he did a year ago, but also increasingly focused on the issues facing the country. Though he may need a vacation, they say he still thrives on a keeping a busy schedule and continues to scoff at critics who say he's taken on too much in his first year. Unlike former President George W. Bush, who made getting eight hours of sleep a priority, Obama often works late into the night, averaging five or six hours of sleep, but making do with less when need be. After the Senate held a 1 a.m. vote on health care last week, Obama said he was awake to see the results.
As a presidential candidate, Obama was known to get grumpy about grueling travel schedules, questioning why so many events had to be layered on top of each other and why the days had to be so long. He not only hated being away from his family for long stretches but, in his typically rational style, questioned the reasoning behind the craziness of the campaign trail. Aides came to dread having to tell him about certain aspects of his schedule.
The grueling travel hasn't gone away, nor have the long days.
Now they're further compounded by overnight flights to Europe and the seemingly endless stream of social events the president is expected to attend, from concerts at the Kennedy Center to holiday parties where he and the first lady spend hours shaking hands.
But for all of its stresses, the presidency has provided Obama ways to cope. He persuaded advisers early on to let him keep his beloved BlackBerry to stay in touch with a handful of friends outside the White House. Aides try to include time in his schedule for morning workouts in the White House gym and weekend rounds of golf.
Most importantly, Obama is living with his family full-time for the first time in his political career. He eats breakfast with his daughters, 11-year-old Malia and 8-year-old Sasha, before heading to the Oval Office. That "home office" also allows the president to take a break in the evenings to spend time with his family.
In a city where virtually anything can become political, Obama has said that one of the things he values most about his wife and daughters is the refuge they provide him from the folly of Washington.
Julie Pace is an Associated Press writer.