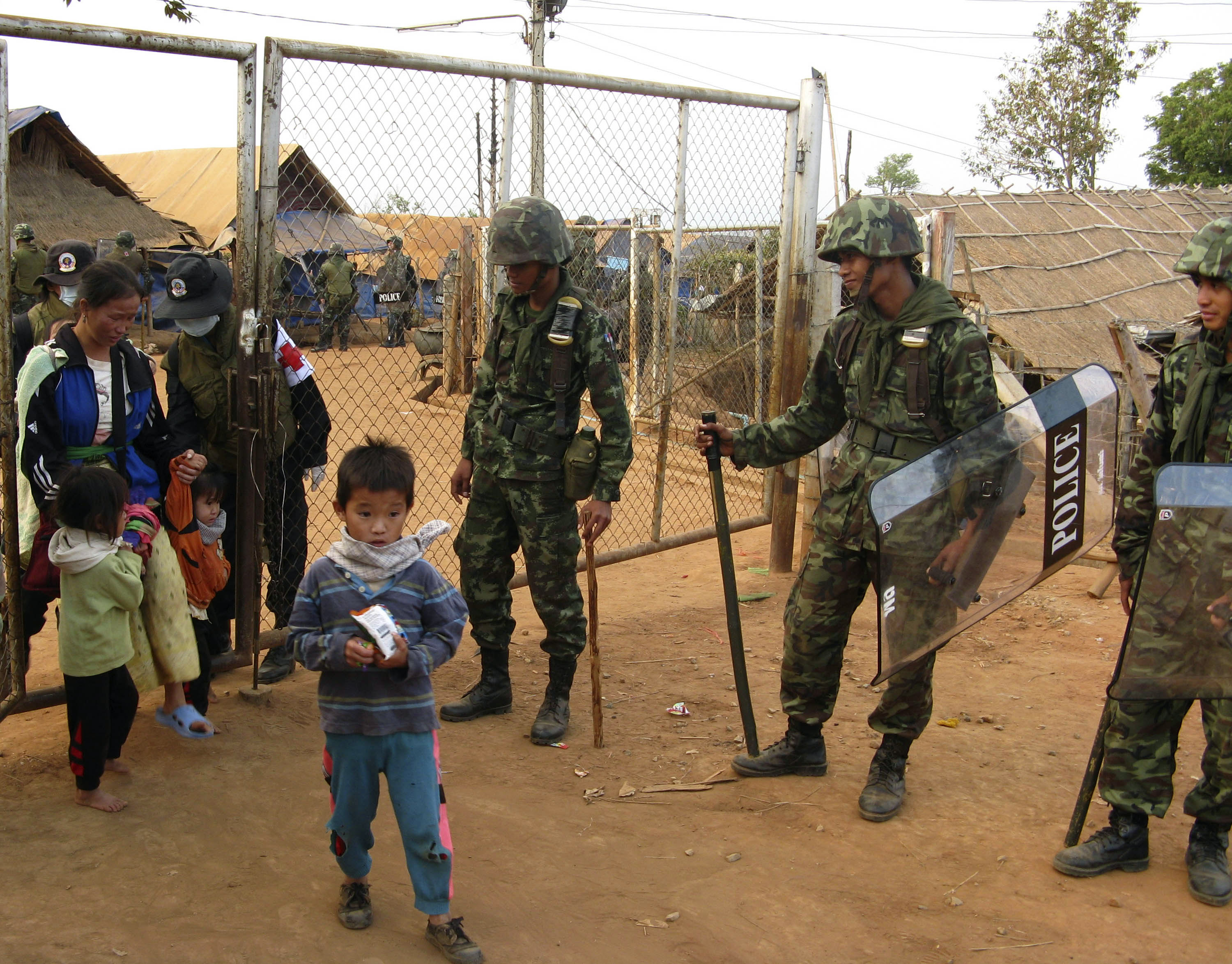 Thailand sent army troops with shields and batons to evict some 4,000 ethnic Hmong asylum seekers yesterday and send them back to Laos despite strong objections from the U.S. and rights groups who fear they will face persecution.
Under tight security, more than 1,000 of the Hmong were loaded onto covered military trucks and driven out of the camp toward buses waiting near the Lao border, Thai authorities said. Journalists kept at a distance from the camp could see many children inside the trucks.
With the eviction under way, the U.S. called for it to stop.
"The U.S. strongly urges Thai authorities to suspend this operation," U.S. State Department spokesman Ian Kelly said in a statement, noting that the United Nations and Thailand in the past had deemed that many of the Hmong in this group were "in need of protection because of the threats they might face in Laos."
The Hmong, an ethnic minority group from Laos' rugged mountains, helped U.S. forces during the Vietnam War. Many Hmong fought under CIA advisers during the so-called "secret war" in Laos before it fell to the communists in 1975.
The Hmong claim they have been persecuted by the Lao government ever since.
More than 300,000 Laotians, mostly Hmong, are known to have fled to Thailand since 1975. Most were either repatriated to Laos or resettled in third countries, particularly the U.S. - but Washington has said it has no plans to resettle more Hmong.
Thai Prime Minister Abhisit Vejjajiva commended the smooth start of the operation.
"It went very well. There was no resistance from the Hmong, and we will try to send them all back," Abhisit told reporters, adding that Thailand had received "confirmation from the Lao government that these Hmong will have a better life."
The Thai government claims most of the Hmong are economic migrants who entered the country illegally and have no claims to refugee status. The group was being held at an overcrowded camp in northern Thailand that the government wants to close.
The Thai army's coordinator for the operation, Col. Thana Charuwat, said 5,000 soldiers, officials and civilian volunteers were involved in the eviction. He said the troops carried no firearms and that their shields and batons met international standards for dealing with situations in which people are being moved against their will.
Two dozen trucks with about 20 soldiers each could be seen heading toward the refugee camp early Monday. A large contingent of troops already were inside the sealed-off camp. Journalists and independent observers were barred from the camp and were allowed no closer than a press center about 12km away.
The army hoped to complete the operation within 24 hours, Thana said Monday, adding that 2,100 of the Hmong had agreed to leave voluntarily and the army was trying to persuade the rest.
The Hmong were being driven out of the camp in military trucks and would then be put on buses going to the Thai border town of Nong Khai, and then across to Laos, heading to the Paksane district in the central province of Bolikhamsai, Thana said.
Laos Foreign Ministry spokesman Khenthong Nuanthasing rejected international concerns about the Hmong's well-being saying the government has a "humanitarian policy" it will adhere to for their resettlement. "These are our citizens and we have to take care of them," Khenthong told the Associated Press in a telephone interview. He said that the group would initially be placed in a temporary shelter and then housed in two "development villages" - in Bolikhamsai province and in Vientiane province - where each family will receive a house and a plot of land. He said international observers will be welcome to visit the villages once the resettlement is completed.
In the past, Lao officials were quoted as saying that the Hmong are not Lao citizens, comments that Khenthong dismissed as individual opinions that were not government policy.
Human rights groups had expressed fear that the Hmong would resist, as they have during smaller-scale repatriations, and that the eviction could turn violent.
New York-based Human Rights Watch on Monday called the deportation "appalling" and a low point for Abhisit's government.
In recent days, troops had confiscated mobile phones and jammed mobile phone signals inside the camp, complicating efforts to monitor the deportation, Sunai said.