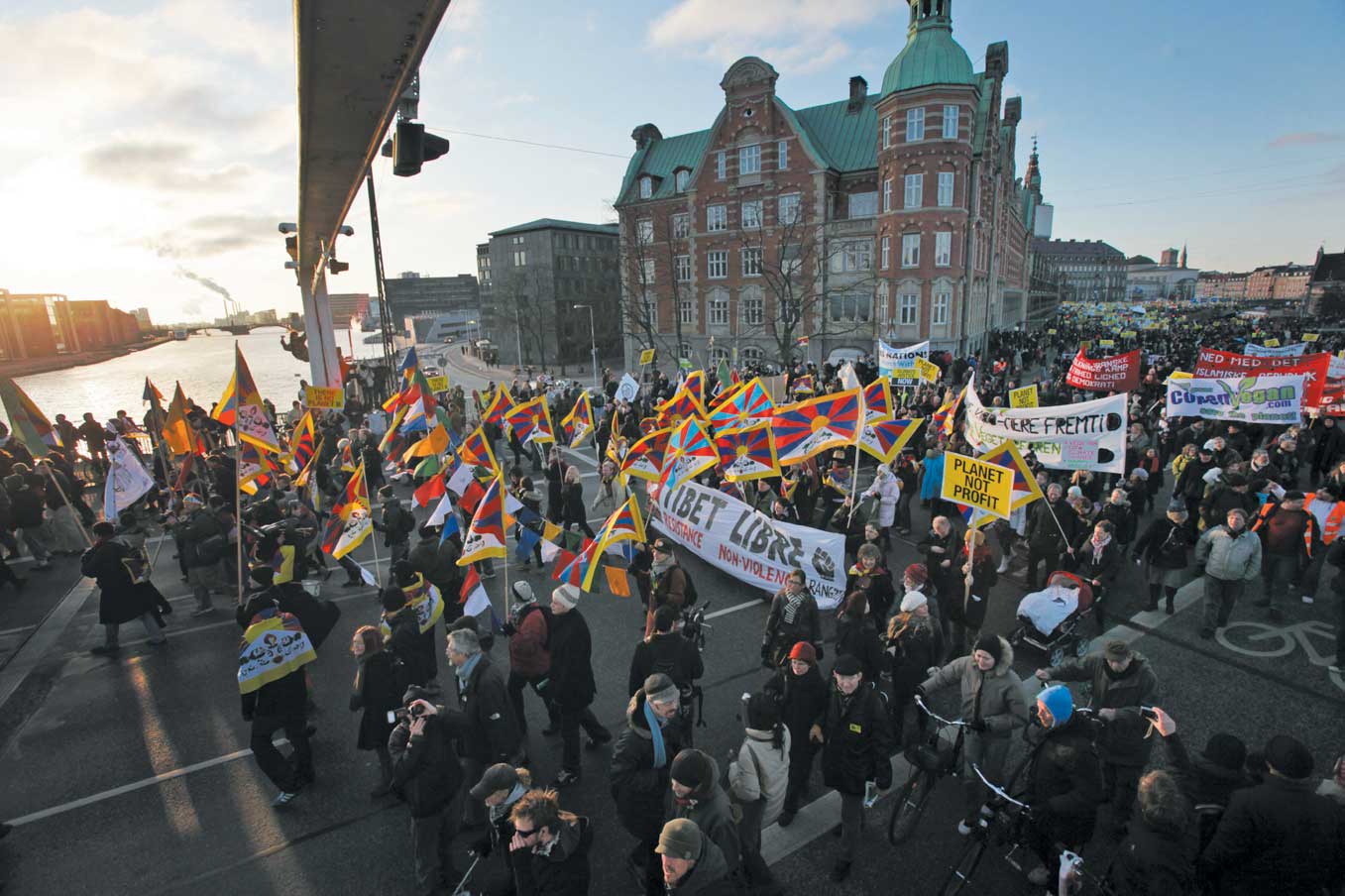 Tens of thousands of protesters marched through the chilly Danish capital and 600 were detained Saturday, in a mass rally to demand an ambitious global climate pact just as talks hit a snag over rich nations' demands on China and other emerging economies.
The mostly peaceful demonstrations in Copenhagen provided the centerpiece of a day of global climate activism stretching from Europe to Asia. Police assigned extra officers to watch protesters marching toward the suburban conference center to demand that leaders act now to fight climate change.
Police estimated their numbers at 40,000, while organizers said as many as 100,000 had joined the march from downtown Copenhagen. It ended with protesters holding aloft candles and torches as they swarmed by night outside the Bella Center where the 192-nation U.N. climate conference is being held.
Police said they rounded up between 600 and 700 people in a preventive action against a group of youth activists at the tail end of the demonstration. Officers in riot gear moved in when some of the activists, masking their faces, threw cobblestones through the windows of the former stock exchange and Foreign Ministry buildings.
A police officer received minor injuries when he was hit by a rock thrown from the group and one protester was injured by fireworks, police spokesman Flemming Steen Munch said.
Earlier, police said they had detained 19 people, mainly for breaking Denmark's strict laws against carrying pocket knives or wearing masks during demonstrations.
Inside the Bella Center, the European Union, Japan and Australia joined the U.S. in criticizing a draft global warming pact that says major developing nations must rein in greenhouse gases, but only if they have outside financing. Rich nations want to require developing nations to limit emissions, with or without financial help.
Swedish Environment Minister Andreas Carlgren, representing the 27-nation EU, told reporter that "there has been a growing understanding that there must be commitments to actions by emerging economies as well."
He said those commitments "must be binding, in the sense that states are standing behind their commitments."
Indian Environment Minister Jairam Ramesh said his country - the world's No. 5 greenhouse gas polluter - will not offer more than its current pledge to slow its growth rate of emissions. It has offered to cut greenhouse gases measured against production by 20 to 25 percent by 2020.
"National interest trumps everything else," Ramesh told reporter. "Whatever I have to do, I've said in my Parliament. We'll engage them (the U.S. and China). I'm not here to make new offers."