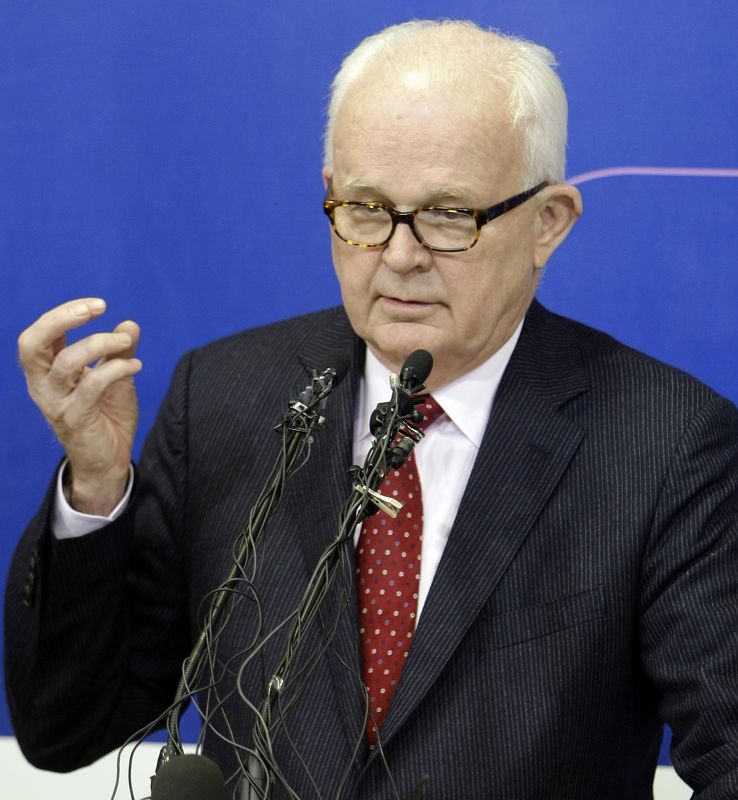 The special U.S. envoy to North Korea said yesterday that no plans have been made for more direct talks with the reclusive communist nation, and that all parties in the effort to end the standoff over its nuclear program should exercise "strategic patience" for now.
Stephen Bosworth was in Beijing to brief Chinese officials on his three days of meetings with North Korean officials this past week, which he called "very businesslike, very candid, forward-looking." But he said how and when stalled six-nation negotiations on the North's nuclear disarmament would resume is yet to be resolved.
"This may be the time to exercise strategic patience," Bosworth told reporters. "Everyone, including North Korea, may need to sit quietly for a bit and see what happens."
North Korea said Friday it understands the need to resume the nuclear negotiations and would work with Washington to resolve remaining "differences," but analysts said it was too early to declare Bosworth's mission a success. North Korea walked away from the talks earlier this year in anger over international criticism of its ambitions to develop long-range rocket technology, vowing never to return.
Weeks later, it conducted a nuclear test and restarted its nuclear facilities, earning widespread condemnation and tighter U.N. sanctions. North Korea called it an issue between itself and the U.S. and demanded bilateral talks.
Though North Korea stopped short Friday of making a firm commitment to return to the negotiating table, its reaction raised hopes that the disarmament process could resume.
Bosworth's talks were the Obama administration's first high-level contact with North Korea. He said after leaving the North on Thursday that the two sides reached a "common understanding" on the need to restart the nuclear negotiations, which involve the two Koreas, China, Japan, the U.S. and Russia.
North Korea echoed that Friday, adding the meetings "deepened the mutual understanding, narrowed their differences and found not a few common points."
The two sides also reached an understanding on the importance of implementing a 2005 disarmament pact, North Korea's Foreign Ministry said in a statement carried by its official Korean Central News Agency.
The 2005 pact calls for North Korea to end its nuclear programs in exchange for economic aid, security assurances and diplomatic recognition.
Despite the apparent change in tone, analysts said thorny issues remain unsolved.