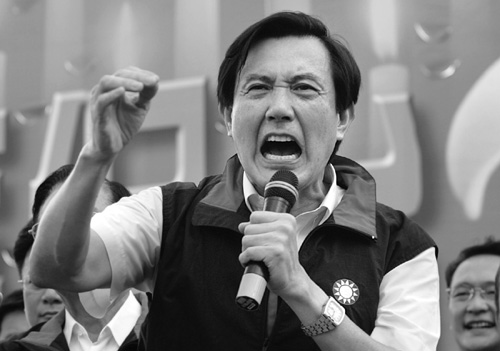 Opposition forces yesterday assembled thousands of supporters in the central city of Changhua to demand President Chen Shui-bian's (陳水扁) resignation, one day after Chen supporters rallied behind the embattled president in Taipei.
With local citizens growing increasingly divided over Chen's future, the Legislature will hold debates on June 21 to 23 and on June 26 to discuss the issue.
Prior to the debates, the opposition hopes to develop popular momentum behind the idea of ousting Chen, as seen by the number of KMT heavyweights on hand at yesterday's rally, including Kuomintang Chairman Ma Ying-jeou (馬英九), People First Party Chairman James Soong (宋楚瑜), Changhua County Magistrate Cho Po-yuan (卓伯源), Taichung Mayor Jason Hu (胡志強) and Taichung County Magistrate Huang Jhong-sheng (黃仲生).
Ma contended that President Chen, whose approval rating has plummeted to less than 18 percent, should resign. He defended the concept of recalling the president, saying it was not necessary to wait for evidence showing Chen was involved in corruption scandals.
According to the law, Chen is allowed to submit a statement in response to a legislative recall motion, but the president refused to do so.
"President Chen's refusal showed that he looked down upon the lawmaking body, trampled on the Constitution, and deceived the public," Ma said.
The KMT chairman also urged the DPP lawmakers to vote against the president in order to prove their determination to fight corruption. Chen has "abducted" the DPP, and "at the historic moment, DPP members should support the recall motion," Ma said.
The Democratic Progressive Party has existed for over 20 years, but the party members seemed to forget their ideals of "integrity, diligence and love of their homeland," he said.
Ma's appeal was aimed at soliciting support from the pan-green alliance of the DPP and the Taiwan Solidarity Union to oust the president, support without which a recall motion is destined to fail.
Two-thirds of all lawmakers, or 147 out of 221, must approve the motion and then submit it for popular approval in a referendum. The pan-blue alliance, however, only controls 111 seats, far short of the two-thirds majority it needs.
The PFP leader said, however, that even though the recall would likely fail, the opposition would then push for a non-confidence vote against Premier Su Tseng-chang (蘇貞昌) to keep the pressure on.
KMT Legislator Wu Yu-sheng (吳育昇), one of the hosts at the rally, said "Taiwan's Son has become Taiwan's shame," referring to the president who once described himself as Taiwan's son.
The opposition tried to capitalize on recent interest in the soccer World Cup by kicking out a soccer ball, a move symbolizing the "pan-blue" camp's efforts to fight corruption and oust Chen. Ma as well as Soong held up red cards - the card a soccer referee uses to eject a player from a match - to eject the president from the "political match" currently being played.
Some pan-green supporters voiced outrage against the demonstrators away from the rally. They shouted out," We want stability," and "The alliances for and against the president will destroy Taiwan." Meanwhile, a DPP local councilor threw water balls at photos of Ma as well as KMT Legislator Chiu Yi (邱毅) to protest the opposition's recall move.
Security around Ma at the rally was heavy, with some 900 policemen deployed and Ma and Soong requested to wear bullet-proof vests. Security has been heightened at all Ma appearances after underground broadcasting stations allegedly called on listeners to assassinate the KMT chairman.
The KMT claimed that it has collected the signatures of more than 500,000 supporters to press the president to step down. But the number was a long way from the one million signatures that Ma set as a target.