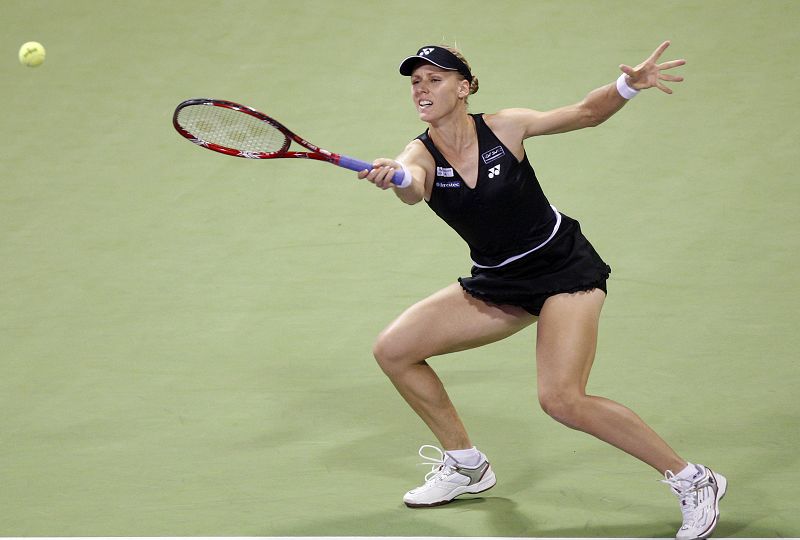 Venus Williams wilted in Qatar's desert heat on Tuesday as feisty Russian Elena Dementieva staged a remarkable WTA Championships comeback to defeat the title-holder 6-3, 6-7 (6/8), 6-2.
Williams had led 6-3, 3-1 before Dementieva recovered to record only her third win in 12 meetings with the great American, and first since 2004.
Dementieva, playing in her ninth season-ender, stunned the seven-time major winner, clinging on even as Williams served for the match at 6-5 in the second set.
The 28-year-old Russian levelled the clash when Williams double-faulted on a fourth set point in the tie-breaker, before sprinting into a commanding 4-0 lead in the decider.
She secured the win with a running, crosscourt backhand after a 2hr 41min marathon in testing, humid conditions.
"It's such a long time since I have beaten her, so I'm really happy about it," said Dementieva after racking up eight of the last 10 games of the contest.
"I just fought for every point. It was very emotional."
Dementieva's shock win now adds extra spice to Williams' second group game against sister Serena yesterday where she'll have to win to stay alive in this eight-woman, US$4.55 million event.
"I had plenty of opportunities to open a big lead, but I just didn't get enough balls in the court," said Williams, who refused to blame the sweltering conditions.
"I'm a Florida girl. It gets hot there too."
Serena was due on court later Tuesday to take on French Open winner Svetlana Kuznetsova as she began her campaign to reclaim the world number one spot from Dinara Safina.
Williams, the holder of 11 Grand Slam titles, was knocked off top spot by Safina on Monday, but she will reclaim the end-of-year top spot if she out-performs the Russian this week. "It would be awesome, really cool," said Williams.
Safina, who lost all three matches she played on her debut here in 2008, opens her campaign yesterday against Jelena Jankovic, the Serbian eighth seed who was defeated in her opener on Tuesday.
The former world number one went down 6-2, 6-3 to Belarussian sixth seed Victoria Azarenka, who is making her tournament debut.