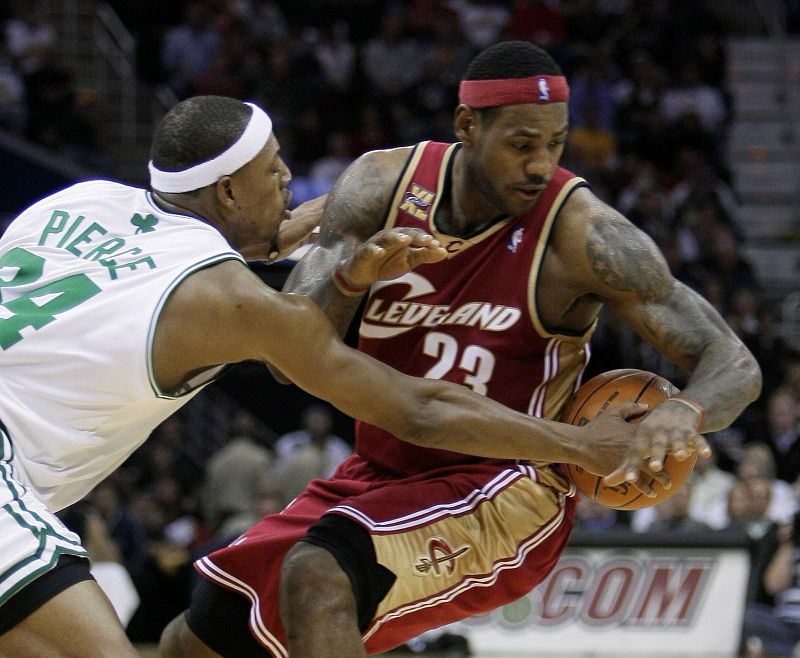 The Boston Celtics beat Cleveland 95-89 in the NBA season opener on Tuesday, spoiling the hyped debut of the Cavaliers with LeBron James and Shaquille O'Neal.
James, the league MVP, and O'Neal were shaded by Boston's reunited Big Three. Paul Pierce scored 23 points, Ray Allen 16 and Kevin Garnett 13 in his first regular-season game since last March.
Pierce made two crucial jumpers and two free throws in the final 1:03 to pace the Celtics, whose drive to a second straight NBA title was derailed when Garnett injured his knee late last season. Rasheed Wallace, added as a free agent during the offseason, had 12 points.
James scored 38 and O'Neal added 10 points and 10 rebounds for the Cavaliers.
At Dallas, Gilbert Arenas had 29 points and nine assists to help stake Washington to an early lead over revamped Dallas in Flip Saunders' debut as Wizards coach.
Arenas shot 10 of 21 and made 8-of-9 free throws for his most points since Nov. 14, 2007. He played only 13 games that season, then had a total of 26 points in two games last season, all because of knee problems. He's feeling so good now that he's not even wearing a brace.
Dirk Nowitzki scored 34 points, but was only 10 of 25. He was 12 of 13 from the foul line - all in the first half. Shawn Marion had 16 points, seven rebounds and three blocks in his Dallas debut, but didn't have any baskets in the middle two quarters.
At Los Angeles, Kobe Bryant scored 33 points and Andrew Bynum added 26 on his 22nd birthday as the reigning NBA champions opened defense of their title by beating Staples Center co-tenants the Los Angeles Clippers, who played without injured No. 1 overall draft pick Blake Griffin.
Ron Artest scored 10 points in his debut in the starting lineup. Pau Gasol sat out with a strained right hamstring and was replaced by Lamar Odom, who had 16 points and 13 rebounds.
Eric Gordon scored 21 points for the Clippers, who lost their ninth in a row to the Lakers. Chris Kaman added 18 points and 16 rebounds, Marcus Camby had 14 points, and reserve Craig Smith 12. Baron Davis was held to two points on 1 of 10 shooting.
At Portland, Oregon, reserve Travis Outlaw scored 23 points as Portland beat Houston in the season opener.
Brandon Roy added 20 points and five assists for the Blazers. Portland hit 20 of 22 free throws and outrebounded Houston 51-33.
Aaron Brooks had 19 points for the Rockets, who defeated Portland in six games this past spring in the first round of the playoffs.
That was a much different Houston team, though. Rockets center Yao Ming is out for the season after offseason foot surgery, Tracy McGrady is still recovering from knee surgery and Ron Artest - who pestered the Blazers - left for the Lakers as a free agent.