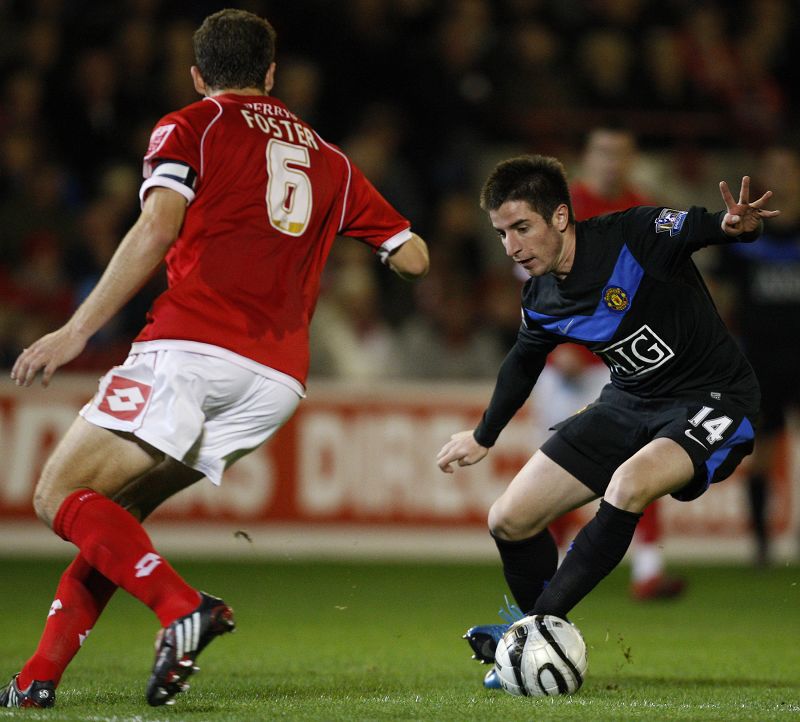 Manchester United got back on track after their defeat against Liverpool as the League Cup holders moved into the quarter-finals with a 2-0 win over Barnsley on Tuesday.
Sir Alex Ferguson's side suffered only their second loss of the season at Anfield on Sunday, but there was no hangover at Oakwell as goals from Danny Welbeck and Michael Owen saw off the Championship outfit.
United played the last 27 minutes with 10 men after United captain Gary Neville was shown a red card by referee Chris Foy for his lunge on Adam Hammill.
The Tykes are managed by Mark Robins, the former United striker whose winning goal in an FA Cup third round tie against Nottingham Forest in 1990 is widely held to have saved Ferguson from the sack.
But there was never any chance of another headline grabbing win for Robins, even though Ferguson made 11 changes to the team beaten by Liverpool, with young French winger Gabriel Obertan making his debut.
Welbeck, who scored the winner against Wolverhampton in the last round, put United ahead in the sixth minute when the 18-year-old headed Anderson's corner past Luke Steele.
Although Barnsley captain Stephen Foster headed against a post before half-time, Owen put United in control with a fine individual effort in the 59th minute before Neville saw red.
Tottenham remain on course for a third successive League Cup final appearance after a 2-0 win against Everton at White Hart Lane.
Harry Redknapp's team, runners-up to United last season and winners in 2008, took the lead when Tom Huddlestone volleyed in David Bentley's 31st minute cross.
Robbie Keane eventually got Tottenham's second goal in the 57th minute. His penalty was saved by Tim Howard, who also kept out follow-ups from Keane, Bentley and Gareth Bale but was beaten at the fourth attempt by Keane.
Aston Villa defeated Sunderland 3-1 on penalties after a dull tie ended goalless after extra time at the Stadium of Light.
Sunderland had a chance to win it in normal time but Kenwyne Jones's penalty was saved by Brad Guzan. Steve Bruce's side fared no better in the shoot-out, as Guzan saved three of their four spot-kicks to hand Villa a last eight spot.
Portsmouth, the Premier League's bottom club, eased past Stoke with a 4-0 win at Fratton Park.