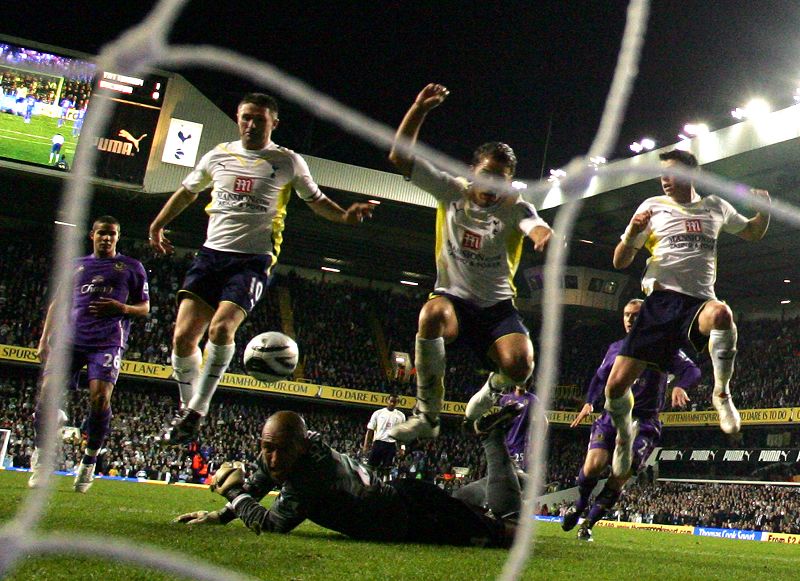 Tottenham's love affair with the League Cup continued on Tuesday as goals from Tom Huddlestone and Robbie Keane sent them into the quarter-finals with a 2-0 win over Everton.
The north London club were runners-up to Manchester United last season and their victory at White Hart Lane will strengthen belief that they can repeat the success of 2008 when they won the competition.
While Spurs manager Harry Redknapp may be dreaming of Wembley, his opposite number David Moyes will be wondering how to kickstart his injury-ravaged team's spluttering season.
Spurs winger Aaron Lennon, who incurred the wrath of Redknapp in Saturday's defeat to Stoke by bringing himself off with an ankle injury, failed to recover in time for the clash.
The Toffees weathered Tottenham's opening barrage and were gifted the first chance of the game when Nigeria striker Ayegbeni Yakubu was fouled on the edge of the area but John Heitinga smashed the free-kick into the defensive wall.
The home goal came under greater threat from the resultant throw-in as France striker Louis Saha hooked a speculative effort over his shoulder which the backpeddling Heurelho Gomes tipped over the bar.
Spurs forward Roman Pavlyuchenko had a great opportunity to further his claim for more first-team action when he was put through following Keane's charge down of Lucas Neill's clearance but could only slice the ball wide of the post.
Pavlyuchenko blew another opening moments later when he darted in front of the near post to receive Hutton's low cross, and although the angle was difficult, the nature of the Russian's contact cannot have impressed Redknapp.
Everton defender Sylvain Distin had a huge let-off after twice failing to clear a speculative cross into the area, but a post came to the Frenchman's rescue as Keane failed to capitalize from six-yards out.
The stay of execution proved to be short-lived as midfielder Huddlestone fired the hosts into the lead in the 31st minute.
David Bentley, whose industrious wing play had been let down by erratic crossing, finally got it right, picking out Huddlestone, who blasted a ferocious left-foot effort past Tim Howard in the visitors' goal.
An acrobatic save from Brazilian Gomes in the home goal kept out Australia midfielder Tim Cahill's long range shot, denying the visitors a perfect start to the second period.
Gomes was again called upon to keep out an effort from Everton substitute Jo.
The importance of the save became magnified two minutes later when a relieved Keane finally doubled Tottenham's advantage.