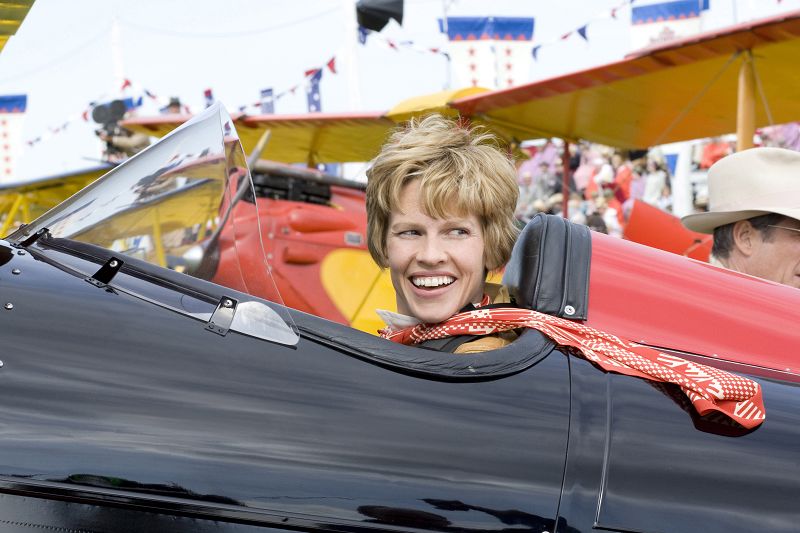 On screen, Hilary Swank incarnates the larger-than-life Amelia Earhart, pioneering aviatrix, as a towering figure. Yet in life the two-time Oscar winner, 35, is of medium height, slim as a tulip stem. Despite a chilly hotel suite, she radiates warmth. Clad in a cobalt-blue minidress patterned with polka dots the size of her large brown eyes, Swank improvises a cocoon out of an assistant's flannel shirt. Don't tell her stylist, but the actress is about being comfortable, not glamorous.
Amelia, directed by Mira Nair, almost certainly will earn Swank her third Academy Award nomination. It is typical of the actress' atypical roles in that it's about a character who flies against the prevailing winds. The first Oscar was for the transgender Brandon Teena in "Boys Don't Cry," a girl determined to live as a boy. The second was for Maggie Fitzgerald, scrappy boxer of "Million Dollar Baby," a waitress determined to train as a prizefighter.
"What grabbed me about Amelia is that here is a woman who made no apologies for pursuing her dreams," Swank says of Earhart, who lived from 1897 to 1937 and was the first woman to fly the Atlantic solo. How does Swank admire Earhart? Let her count the ways. "She was honest about the life she wanted to live, she was supportive of other women, she wrote her own prenup!" enthuses the actress, flashing her panoramic smile.
Indeed, the Kansas-born Earhart fought to get her pilot's license when women were perceived as too hormonal to fly. She founded the 99s, an organization that helped recruit and support women in aviation.