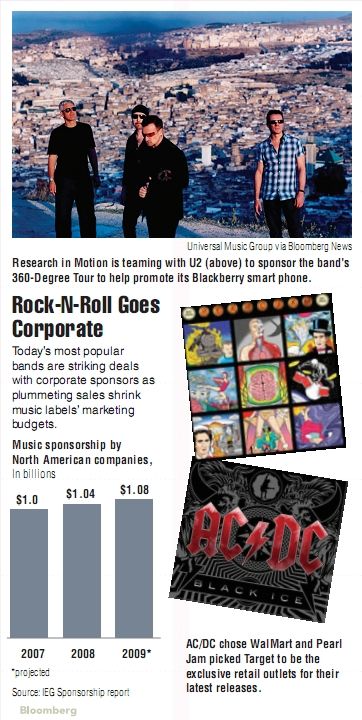 Superstars U2 announced Wednesday they will perform a free concert at Germany's Brandenburg Gate to mark the 20th anniversary of the fall of the Berlin Wall. The Irish rockers will perform in front of the landmark in the German capital on Nov. 5 as part of the MTV Europe Music Awards, the group announced on their website. The performance will be a prelude to the "fall of the wall" celebrations in Berlin and will be beamed in to the televised broadcast of the awards.
"It'll be an exciting spot to be in, 20 years almost to the day since the wall came down." said U2 manager Paul McGuinness. "Should be fun." U2 relocated to Berlin in 1990 in the months after the wall fell to reinvent their sound on the "Achtung Baby" album, recording at the Hansa Studios close to where the wall stood. Tickets to attend the concert will be free and fans can register at www.u2.com or www.mtvema.com from yesterday.
"This year's awards will be remembered as the night when the world's major music players came together against the backdrop of the fall of the Berlin Wall to celebrate music, freedom and the birth of a new age in Europe," said Antonio Campo Dall'Orto, executive producer of the awards.
Germany marks 20 years since the fall of the Berlin Wall and the country's reunification on Nov. 9.