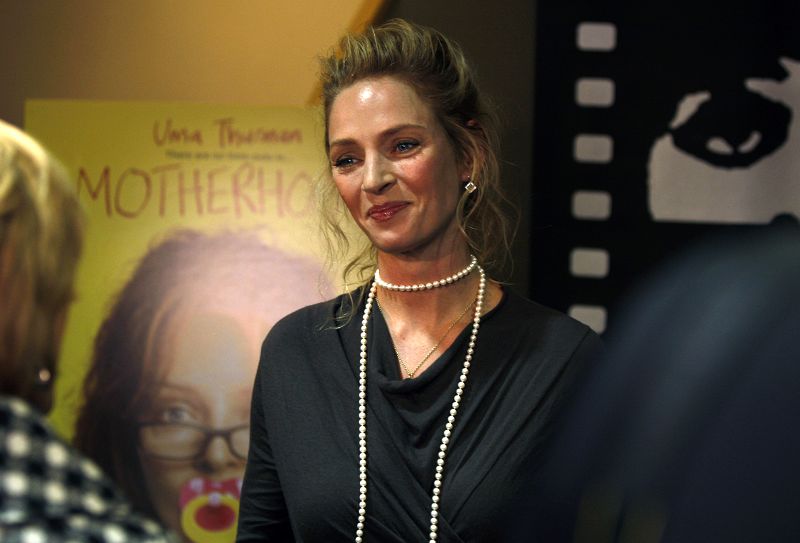 Uma Thurman is a couple of hours from accepting her Career Achievement Award from the Chicago International Film Festival, but she isn't quite in victory-dance mode. "I hope I achieved something," she says, seated in a downtown hotel conference room earlier this month. "Sometimes I feel I have. Most of the time, I feel I haven't."
The striking 39-year-old actress - her hair back to its familiar blond after a red-headed stint in her latest film, "Motherhood," her right wrist in a cast after "minor" surgery that she says has become a major pain - is far from a jaded award recipient. Although she won a Golden Globe for her lead performance as a working-class single woman in Mira Nair's "Hysterical Blindness" (2002) and was nominated for an Oscar for her role in Quentin Tarantino's "Pulp Fiction" (1994), she doesn't consider those celebrated roles, or her work in Tarantino's "Kill Bill" movies, to be her greatest achievement.
"Being here now is my greatest achievement," she says. "You look at the hazing process of the acting community, and it's worse than any college sorority." She laughs, as she does often. "They might as well hang you out the window and cover you in toilet paper 100,000 times every year. It's quite an amazing thing just to keep your sanity, keep the freshness of your look on human experience." So, she says, she truly appreciates the Chicago festival award, which is inscribed, in part: "Uma Thurman, displaying an ability to continually deliver exceptional performances, you have become an icon in American cinema." "I'm very honored, a little surprised," she says. "Sometimes you feel sort of forgotten. You've been doing it for, like, 23 years because you started at 16. You feel kind of like, 'Ah, well, who noticed that I still kept kicking?'"