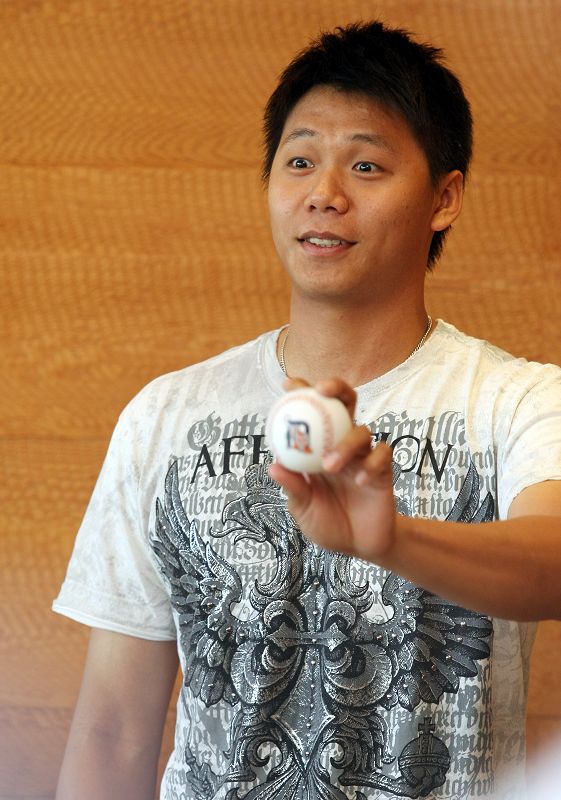 The homecoming Detroit Tigers left-hander Ni Fu-te yesterday urged all professional baseball players in Taiwan to maintain a sense of self-respect and stay away from trouble, in order to avoid being caught up in scandals. His admonition comes as the latest game-fixing controversy again hit Taiwan's pro league over the past few days, another major blow to the baseball-loving island nation.
"It (game-fixing) has happened many times," said Ni, "I think the players should exercise self-control and the ball clubs should also do their part to protect their players."
Only by doing so will Taiwan's Chinese Professional Baseball League be able to stay away from scandals and move forward, he said.
Ni made the above comments in an afternoon tea session with local media yesterday. This is his first public appearance after returning home from the U.S. Major Leagues. The comment serves as a response to the latest game-throwing scandal which hit Taiwan two days ago.
Investigators yesterday were questioning eight players from three of the four teams in the CPBL in a move to check whether Taiwanese baseball players accepted bribes to fix games.
The list included Tsao Chin-hui and five colleagues from the widely-popular Brother Elephants. Tsao, the first Taiwanese pitcher to compete in the MLB, released a statement Monday expressing his anger and surprise at being suspected in the case, less than a year after his return to Taiwan to join the Elephants.
The new game-fixing controversy is already the fifth to hit the local league in its 20-year history.
The Tigers signed the side-arming lefty Ni to a Minor League contract in last year's off season out of the CPBL and invited him to spring training, making him the first local baseballer to have made the jump to the MLB after starting his career in Taiwan's pro league.
Before joining the Tigers, Ni was previously drafted by the Brother Elephants in a special draft held at the end of 2008 after his original team, the ChinaTrust Whales, was disbanded, but he declined the option to join the team.
Described by the Major League Baseball website as a "valuable piece" of the team's relief pitching staff since his MLB debut in June, the 27-year-old ended the 2009 season, his first in the U.S. major leagues, with a respectable earned run average (ERA) of 2.61.
During yesterday's meeting with the press, Ni said that he was extremely fortunate to have been elevated to the Major League so fast.
"I have learned a great deal in the past season," he said, adding that he will be working on his breaking balls in preparation for next season.
He also expressed gratitude to his teammates and team manager Jim Leyland for their support.
Ni will be staying in Taiwan for self-training before returning to the U.S. for spring training next year.