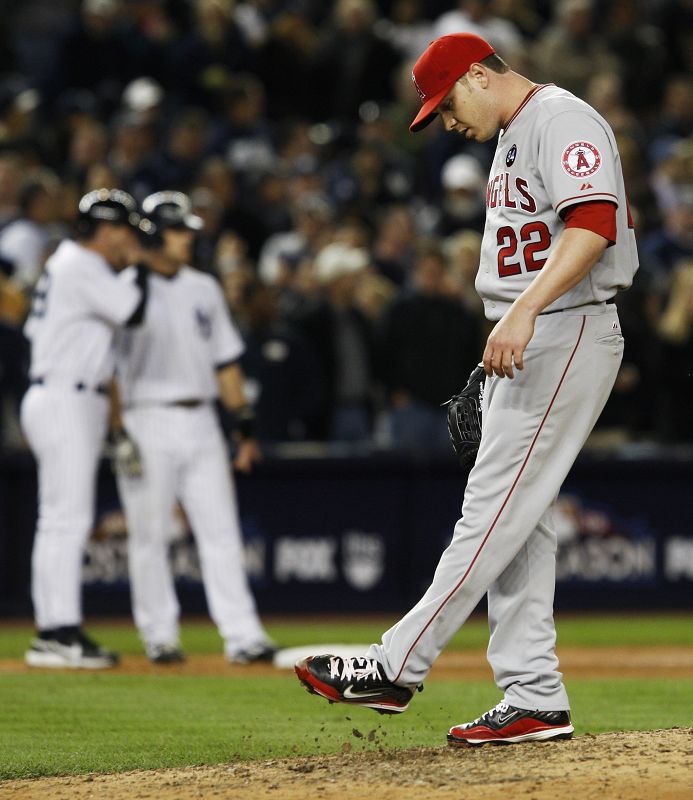 The Los Angeles Angels loss in six games to the New York Yankees eliminated them from the postseason but it didn't diminish the strong feelings they have for fallen teammate Nick Adenhart.
"This is a special group of guys and right now they are taking it hard," said Angels manager Mike Scioscia after they lost 5-2 to the Yankees Sunday in the clinching game of the American League championship series. "You can't forget the great things they accomplished this year and as much as they have been through trying to win the honourable way."
Rising-star Adenhart, 22, was killed seven months ago by an alleged drunk driver in a car smash just hours after he pitched his best game in an Angels' uniform.
His teammates dedicated the season to him and even took his jersey with them on road trips. After they won their first playoff series they celebrated with the jersey dousing it with champagne.
"I know that's what will stand out in this season - what we were able to do for Nick," said Jered Weaver. "I think we're proud of the way we came together and won the division and did some good things in the playoffs."
The Angels carved out two close wins over the Yankees at home but they were unable to play at a consistent level over the entire series.
They looked more impressive in sweeping the Boston Red Sox in the division series.
"We had to overcome a lot of obstacles this season, and we have nothing to hang our heads about," Angels Torii Hunter said.
It will be a winter of uncertainty for California's boys of summer. The Angels management have to try and resign a number of players, including Bobby Abreau, Chone Figgins, John Lackey and Vladimir Guerrero.
"You try to reflect on the good things that happened over the course of the season," said Figgins, who who is one of the Angels' seven potential free agents. "It is something you don't really think about until the time comes. This season was rough enough. To end this way is tough."
At times, Los Angeles appeared to be their own worst enemy against the Yankees. They hit just .236 and made eight errors against the Yankees.
"We shot ourselves in the foot in a couple of games in this series," said Scioscia.
The Angeles were also trying to win the honorable way. Their 2002 World Series title was tainted by allegations of widespread steroid use among the players.
The Angels 2002 World Series MVP Troy Glaus has been linked to steroids along with teammates Brendan Donnelly and Scott Schoeneweis. Glaus is reported to have told investigators he was "willing to take the risk" with performance-enhancing drugs.
"But I think as we reflect on this, after a couple of days, just look at all the great things that happened on the field for us, the trials and tribulations that the guys in that clubhouse went through all year is something that you hope you never have to go through in your lifetime again," Scioscia said.