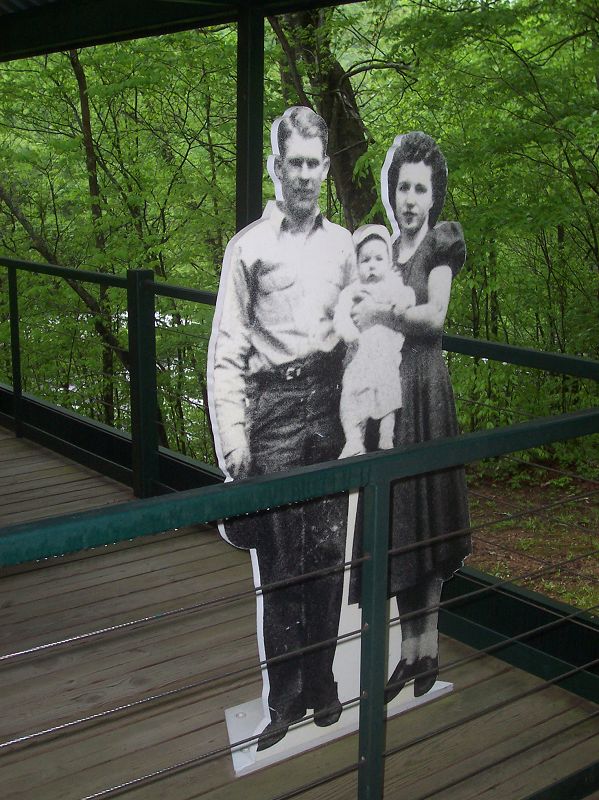 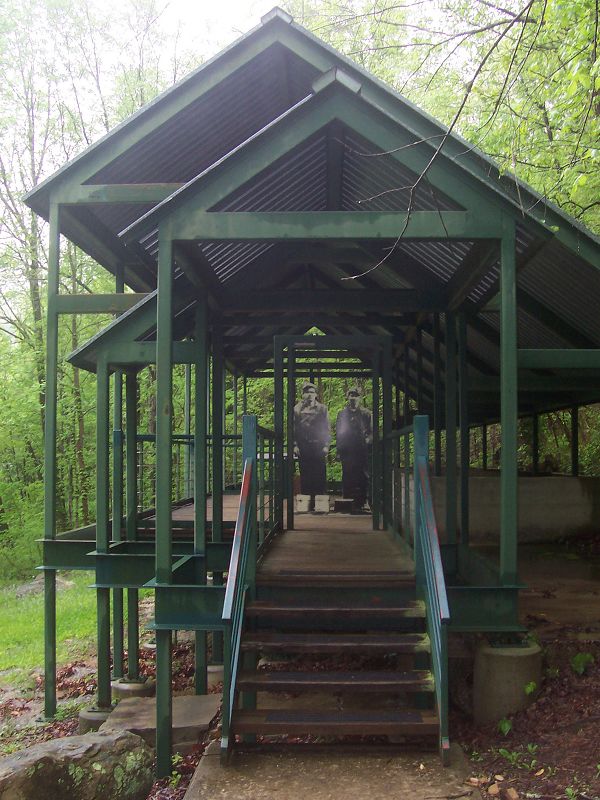 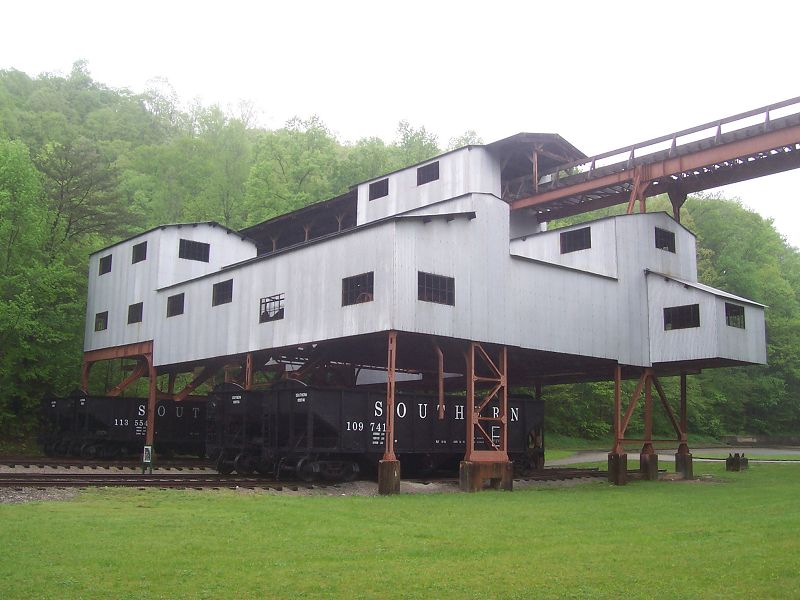 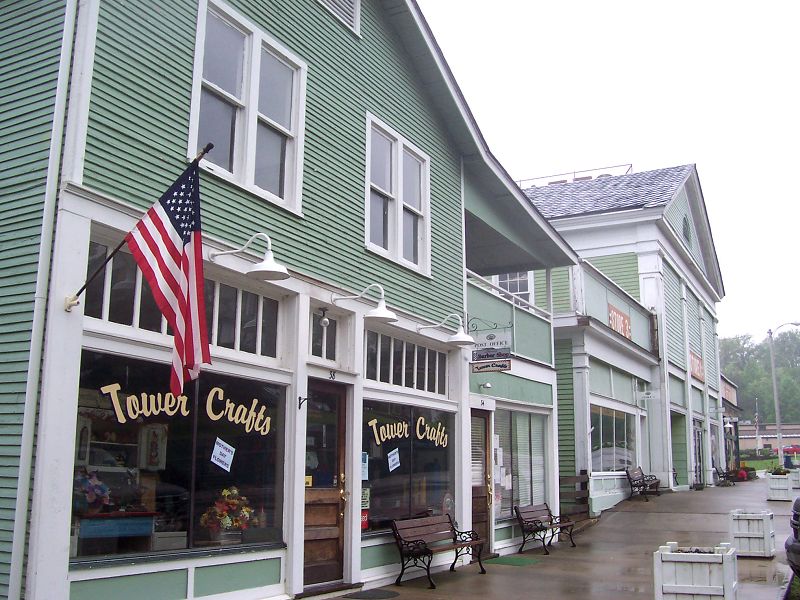 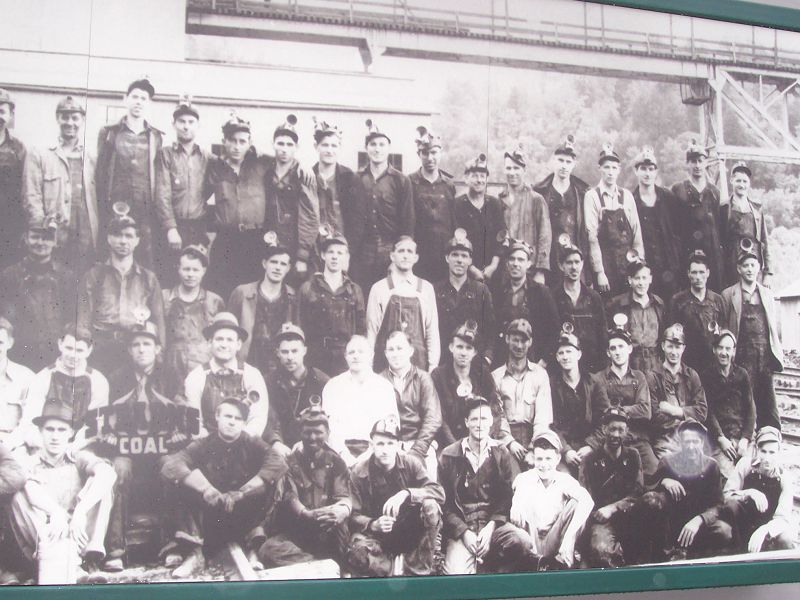 Blue Heron is a ghost town in more than one way.
Haunting voices of miners and company officials tell visitors what life was like in the old coal camp at Mine No. 18 on the banks of the Big South Fork of the Cumberland River near the Kentucky-Tennessee border.
You can learn about Blue Heron in what federal officials call "ghost structures," open-air metal-shelled facilities on the sites of now-gone buildings.
Such an approach was taken in the 1980s by the U.S. Army Corps of Engineers that developed Blue Heron and the National Park Service that manages it as part of the Big South Fork National River and Recreation Area.
Federal policy says buildings that have disappeared should only be rebuilt if you have detailed plans that show what they looked like.
In the case of Blue Heron, that was not possible. The isolated company mining town that had opened in 1937 and had housed hundreds of residents over the years was abandoned in 1962. Some buildings were removed. Others fell into decay. No original buildings were still standing by the 1980s. It was an old ghost town.
That led to the development of the 13 open-sided structures that include the audio tapes and old photographs that describe life in Blue Heron.
But the real story of Blue Heron comes not from written records, but from oral history of its occupants.
Blue Heron was part of the Michigan-based Stearns Coal and Lumber Co. In the early 1900s, Justus Stearns, one of the last lumber barons on the Great Lakes, bought 130,000 acres of virgin forest in southern Kentucky.
The town of Stearns became the center of an empire that covered 200 square miles of timber and mining operations. At its peak, the company employed 2,200 miners at its camps.
Today you can drive to Blue Heron and take an easy walking tour. Or you can ride the Big South Fork Scenic Railway that runs from Stearns and descends 600 feet into the gorge to reach Blue Heron.
The entire camp, from the superintendent's house and the company store to the bath house to old residences, is a self-guided, open-air museum.
The main structure in Blue Heron was and still is the tipple that sorted coal and dumped it into waiting rail cars.
It was a state-of-the-art facility when it opened in the late 1930s. The coal was transported to Stearns, a once-booming company town, via the old Kentucky & Tennessee Railroad and then shipped to markets in Cincinnati and Chattanooga.
Electric tram cars hauled the coal from Blue Heron and surrounding mines and dropped it into the tipple's 120-ton hopper. The pedestrian bridge atop the tipple, once used by coal-filled trams, provides a bird's-eye view of the old camp and the nearby river.
Your tour will take you by one of the mine entrances with its reconstructed facade and interpretive exhibits. At the newly built train depot, visitors will find a model of Blue Heron from the 1950s along with more old photographs and interpretive panels.
Close to Blue Heron is another attraction: Barthell, a privately owned and restored coal camp. It was the first of 18 camps started in 1902 by the Stearns Coal and Lumber Co. It closed in 1952.
The Koger family that rebuilt Barthell offers guided tours, overnight lodging in re-created miners' houses and country meals in a restaurant. You can tour the old mine as well as reconstructed camp buildings with their 1910 look.
Barthell - seven miles west of Stearns off state Route 742 - is open daily except Mondays from April through November. For more information, write to Barthell Coal Camp, P.O. Box 53, Whitley City, Kentucky 42653, 606-376-8749 or 888-550-5748, http://www.barthellcoalcamp.com.
Blue Heron sits along the eastern edge of one of the least-known big national park units in the East. The 125,000-acre federal park is known for its 800-foot-deep canyon, its stone arches (big and little), its whitewater and its trails for hiking and mountain biking.
Big South Fork is famed for its spring whitewater rafting trips and for its canoeing and kayaking the rest of the year. Outfitters offer an array of paddling options on the free-flowing river with its rapids rated Class 3 and up. Rapids are rated on a scale of Class 1 being the easiest and Class 6 being the hardest.
The Big South Fork is also noted for its dramatic cliffs, arches, chimneys and rock shelters, all of resistant sandstone.
One of the most popular geologic features is Twin Arches on the Tennessee side of the park. The trailhead to the arches is about 20 miles from the Bandy Creek Visitor Center in the western part of the park.
It is a 0.7-mile hike with lots of steps to North Arch with a 51-foot clearance and South Arch with a 70-foot clearance. North Arch has a span of 93 feet. South Arch has a 135-foot span.
Very few rock bridges in the East are as high or as broad as South Arch. You can hike under, on and across the almost-perfect arches that look like they belong in southern Utah.
Other easily accessible arches in and around the Big South Fork include Needle Arch, Split Bow Arch, Yahoo Arch, Koger Arch, Buffalo Arch and Gobblers Arch. There are other arches but most do not have trails leading to them.
Big South Fork has 150 miles of hiking trails plus 150 miles of horse trails. It includes a section of the Sheltowee Trace National Recreation Trail that cuts 260 miles through the Daniel Boone National Forest. Mountain bikers are welcome on the horse trails but not the hiking trails in Big South Fork.
The park with its six campgrounds is also home to Charit Creek Lodge, a rustic overnight lodge tucked into a meadow surrounded by high bluffs. It is accessible only by horseback or by hiking in 0.8 miles. There is no electricity but there are kerosene lamps and wood-burning stoves.
For reservations and more information, write Wilderness Lodging, 250 Apple Valley Road, Sevierville, TN 37862, 865-429-5704, http://www.charitcreek.com.